After a particularly busy month of July and first week of August, the next few weeks promise to be somnolent by comparison. A good time to catch up on our siestas.

Too many cultural events take place here during July but we like them all and try to take in as much as possible, which means six operas during our Aix festival, an average of three mid-day Master Classes per week and an occasional evening concert. And then there's Avignon where in a span of three days we saw one late-evening play and five daytime productions. We ended the month of July with a two-day visit to Paris to meet up with our American daughter and son-in law where we "enjoyed" a few unseasonably chilly and rainy days before traveling south together to the dry summer heat of Provence and a week of local tourism in early August.

Vacationing is indeed easy in the south of France where beaches, mountains, lakes and gorges offer a wide variety of leisurely or sporty activities for all tastes and ages. And when our young guests pedal out into nature and cool down in ice-cold mountain springs, we leave our hot apartment for an air-conditioned matinee movie and perhaps a brief snooze.

The French are hedonists with enough paid vacation days to take winter and summer holidays. Their hedonism becomes ugly, however, when you know that during holidays they often abandon their pets rather than pay a kennel. Dogs are regularly left (without identifying collars, of course) at gas stations or food stops along highways and byways, or tied to the gate of an animal shelter. In France, 100,000 domestic pets are abandoned this way every year, 60,000 of them during summer holidays.

According to the local SPA, during holidays pets are abandoned far from home in touristy and heavily traveled areas such as Provence. This summer has been the worst ever, it appears, perhaps due to a newly passed law that officially allows home owners and campsite managers to prohibit pets on their properties. Only three beaches in Provence are dog friendly; all others prohibit dogs during the months of July and August when they are packed with people. "There is no excusable reason to abandon your animal", says Michèle Dottore, founder of the Aix animal shelter, who favors a reduction of the dog and cat population as a start. Systematic sterilizations in animal shelters, for example, and - as Stéphane Lamart of Assistance aux Animaux proposes - the cost of sterilization should be tax deductible to pet owners. He would also like to see that private individuals no longer be allowed to sell their litters. This is probably unrealistic and at best would take years to enact, while the nasty habit of abandoning pets continues to claim thousands of "man's best friends". 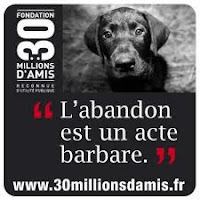 Curious side effect:  pet adoptions peak in late August/early September when animal shelters are full and some parents take their children to pick out a cute little dog, to love and to cherish... until next summer?

During the gigantic Sextius-Mirabeau urban renewal project in Aix-en-Provence that started in 1997 and lasted more than a dozen years, a large number of dinosaur eggs was found that confirmed the paleontological Aix-en-Provence Basin along the foot of the Montagne Sainte Victoire as one of the richest dinosaur egg deposits in the world. The eggs, estimated to be about 7 million years old, are thought to be those of the titanosaurus, a large herbivore with a long neck that could grow to ten meters which allowed him to feed on tree leaves.

At that time Provence had a tropical climate and a large river ran through the area. The dinosaurs laid their eggs in this river bed and probably covered them with vegetable matter and earth. When the area flooded the eggs drowned and got covered with multiple layers of sediment which preserved and protected them. The 106-hectare Aix-en-Provence Basin has revealed numerous dinosaur nests with 3-8 eggs each, as well as other fossilized remains and a small number of dinosaur teeth of up to eight cm long.

Paleontologists at the Museum of Natural History of Aix-en-Provence are studying the sediments found inside certain eggs as well as some remains of embryos in order to determine which of the three known species of dinosaurs of the area laid the eggs.

Over the course of the Sextius-Mirabeau project nearly one thousand dinosaur eggs were found, earning Aix its nickname of "Eggs-en-Provence".

During the hot summer months we usually eat fresh fruits for dessert. For variety, these fruits can take the form of a fruit pie. Here follows a recipe from my book Taking Root in Provence:


Figs are plentiful in Provence, with two summer harvests (usually late June and late August), and because fig trees do not require much care or pruning they are very common in provençal gardens. In fact, friends who have fig trees will often give you home-made "confiture de figues" because ripe figs will not keep well and need to be eaten within a day or two or be preserved as jam or chutney. Of course, figs are also available at our daily farmers’ markets and I like to buy the very ripe blue figs to make a fig pie. It is a naturally sweet fruit that requires no added sugar and is extremely easy to make.

Ingredients:
Fresh very ripe figs (blue or green), soft to the touch and fragrant
Puff pastry – either a round or a square sheet to fit a pie mold with a 1-inch standing edge
Buy enough figs to cover your pastry sheet with tightly packed halved figs, the cut side facing up.

Preheat your oven to 430 F and bake your pie for about 20 minutes or until nicely browned.
Serve it lukewarm with a scoop of vanilla ice-cream.

If ripe figs are not picked they will fall off the tree and either be eaten by birds or rot away. But you can collect these figs on a shallow tray, cover them with thin gauze to keep the flies off, and leave them to dry in the sun. They’ll shrink and wrinkle a bit in the process and become an intensely flavored delicious snack that keeps all summer.

(*)  For more recipes from Taking Root in Provence, click here: