In my September blog I mentioned the spectacular performance of Spanish bullfighter Jose Tomás in the Roman arena of Nîmes which reignited the debate on whether bullfighting should be banned in France, as it had been in Catalunia in 2011. Following that ruling in Spain the French Supreme Court was asked to rule on the constitutionality of bullfighting in France and the Court's decision has just been announced. Les Sages (the Wise Men) have ruled that the traditional corrida where bulls are killed is indeed constitutional in France in those areas where this event has been a long-time local tradition. The practice had been condoned in the Penal Code of 1951, and since this tradition does not infringe on any right that is constitutionally guaranteed, it remains valid under the law, the Court said.

Every year in early October a week-long regatta is held in the bay of Saint Tropez where sailboats of different types compete. Crews from Australia, New Zealand, England, Italy, France, Spain and elsewhere sail everything from magnificent wooden three-masters dating from the late 1800's to today's latest fiberglass models − all against the pretty backdrop of the red-and-yellow church of Saint Tropez (colors of Provence) and its attractive restaurant-lined harbor.

Competition may be fierce during the day, but in the evening the mood is one of jolly camaraderie as the international crews of men and women (yes - lots of girls among the crews) fill the local bars. Tourists, paparazzi and showy yachts are finally gone, and French sailing enthusiasts are happy to fill the void and take back their pretty little town from the summer hordes.

The already less-than-pristine image of Marseilles has been seriously tarnished by a police scandal that erupted in early October. This ancient port city with its large immigrant population has long been plagued by drug-driven crime, and turf wars between rival dealers have claimed 15 lives so far this year. Le Grand Banditisme of old seemed to focus on bank heists and holding up Brinks trucks, which usually caused little or no collateral damage. These were the pros of the underworld, you might say, with a certain "honor among thieves". But lately a younger criminal element − largely consisting of young men from the impoverished Quartier Nord − is entering the picture, heavily armed and seemingly unafraid. Unemployed and unschooled, they made quick money as lookouts or messengers for the drug lords before they started to buy and sell drugs themselves. Where simple pistols were used before, machine guns (read kalashnikovs) are now the weapon of choice to settle scores among the various criminal groups that are claiming a share of the drug business.

A special police force, the BAC (Brigade Anti-Criminalité), has been working for years, often undercover, in the most troubled areas of Marseilles, including the Northern District of the city which is known to be fertile ground for drug cartels, where a top dealer can make up to €100,000 per month. Despite increased manpower over time, the police did not seem to make any headway in this drug-infested Quartier Nord. No wonder. A week ago it was discovered that the men from the BAC had been sharing the take of small drug dealers all along. In a double ceiling of the BAC Nord police station a stash of drugs and cash was found, as well as stolen jewelry. It appears that after eleven months of an internal police investigation, which included hidden microphones in police cars where BAC members were overheard to discuss the splitting of their confiscated loot, the necessary evidence was finally in place.


Manuel Valls, Minister of the Interior, came to Marseilles to announce the first arrests last week and vowed to get to the bottom of the local police corruption. To date, seven members of the BAC Nord unit have been jailed while awaiting trial, and 23 others have been relieved of their duties, with pay, for further investigation. These 30 policemen constitute nearly the entire BAC Nord unit whose duty it was to fight drug-related crime and clear out the dealers. A black eye for Marseilles!

This second-largest city of France and its largest commercial port has always been a rebellious city and often at odds with the government in Paris. It gave France its national anthem, La Marseillaise, a revolutionary call to the citizens to rise up against the invading Prussian armies, which later became a rallying cry in the French Revolution. Since its founding by Greek sailors in 600 BC, the ancient city of Massilia has known many masters but has never been subdued for long, and today it continues to go its own way. The recent revelation of wide-spread police corruption, however, may have been one scandal too many and could provide Interior Minister Manuel Valls an opportunity to apply the drastic measures and zero tolerance he announced at his appointment by President François Hollande last May.

SOME GOOD NEWS FOR DSK

On October 2nd a French prosecutor in Northern France announced that the rape case against Dominique Strauss-Kahn has been dropped, but that the Court has deferred its ruling on the charge of aggravated pimping until November 28th. While the civil suit filed against him in New York is still pending, DSK is trying to get back on his feet and has decided to open a consultancy in Paris. 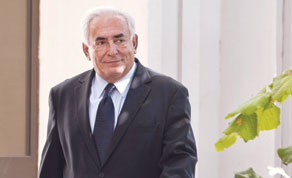 In early September he registered his international consulting firm with the Paris Tribunal of Commerce under the name Parnasse - possibly derived from the Montparnasse neighborhood he moved to after his separation from his wife Anne Sinclair. His qualifications as an economist and savvy international negotiator are well established, but it remains to be seen whether women would sign up to work for him.

Always on the lookout for tasty bits of franglais I just came across another one for the records. In a recent article about a swimming meet, a local girl who lost was called a "loseuse".  Amazing how unacceptable the French version appears to be these days, when a perfectly adequate "perdante" would have done.

Amazing also how the French, who have difficulty pronouncing English, insist on adding letters where they don't exist and dropping others. For instance, after my husband had had a brief blackout his doctor told him: "Open your heyes; open your heyes. Now squeeze my end." (... my hand, to you and me).

Blue jeans are usually translated as "un jean" or spelled "jean's" in French. And a workout suit or sweat shirt becomes "un sweat" (pr. sweet). Who told them that?

(*)  To read more about Marseilles, check my book Taking Root in Provence by clicking here.