The annual Fête du Livre has just concluded its four-day celebration in Aix-en-Provence, this time under the banner of Bruits du Monde. From October 18-21, four writers from China, Hungary, Israel, and Spain discussed their work that despite war, exile or censure has found an international audience. The books of Yan Lianke from China, Peter Esterházy from Hungary, Juan Goytisolo from Spain, and David Grossman from Israel − all auteurs engagés − resonate with their views as critic, satirical or otherwise, of the society that surrounds them or banned them. Israeli David Grossman, who is known for his pro-Palestinian stance, was particularly compelling in his even-handed and articulate response to the challenges of a conflict-riven Israel that claimed the life of his only son. 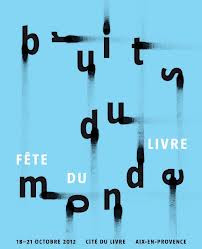 This encounter, as much about geopolitics as about literature, was a thought-provoking occasion to appreciate the spirit of resistance and the triumph of art over adversity.

The event ended with an homage to Carlos Fuentes, guest of honor at last year's Fête du Livre, who died in Mexico City in May 2012 at age 83.

Throughout the 1990's the city of Bordeaux underwent an extensive urban renewal with spectacular results, crowned in 2007 by its designation as a UNESCO World Heritage site. In early October I finally had a chance to pay a long-overdue visit to Bordeaux to see for myself. 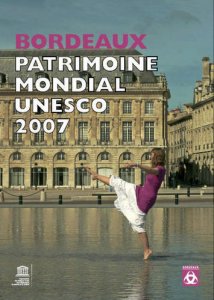 The first thing that struck me was how pedestrian-friendly this city is. The large historic center of town was not only beautifully restored but also largely closed to traffic and set aside for pedestrians. The banks of the Garonne river, which used to be crowded with dilapidated depots and docks, were transformed into airy spaces of landscaped walkways and promenades as well as a much beloved Water Mirror which floods and drains itself with 2 cm of water at regular intervals, a delightful feature during hot summer months. In-town public transportation is assured by a sleek-lined silent tram, and cars are routed along large avenues that skirt but never seem to traverse the pedestrian-only city center. In Bordeaux the din of urban traffic with its attendant pollution seems to be a thing of the past.

The neoclassical Grand Theâtre which houses the local opera and ballet companies, has been restored to its former glory including the twelve life-size sculptures of muses and goddesses along its roofline. We managed to see the magnificent gold-and-blue interior as well when we found last-minute tickets to a delicious production of Donizetti's opera The Barber of Sevillle.

Yes, Bordeaux was a pleasant surprise. With its splendid historic center, its large parks, its wide river banks reserved for bicycling, jogging, walking, picnicking, and of course its surrounding wine country and famous chateaux, it is today one of the most attractive places to visit in France.

Biarritz, some 100 miles south of Bordeaux, is the largest seaside resort along the Atlantic coast known as the Côte Basque. It started life as a whaling village but as whales disappeared from the Gulf of Biscay, so did the area's principal means of living. It revived when in the late 1700's doctors began to recognize the therapeutic value of sea baths in the area and patients were soon joined by tourists and even by Emperor Napoleon I and Josephine in 1808. When their nephew and future emperor Napoleon III married a local girl in 1854, he built the magnificent Villa Eugénie for his bride on a promontory overlooking the sea (today's Hotel du Palais). This sealed the reputation of Biarritz as the royal resort of choice, and during La Belle Epoque the city became a symbol of progress with a tramway, a salt-water spa, a casino, a concert hall, and a theatre where Sarah Bernhardt played to the rich and famous. 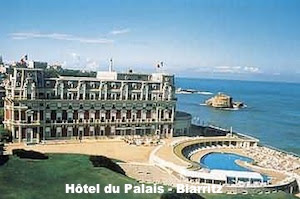 Today, Biarritz has lost its glamour of old but survives nicely on summer tourism and its renowned Thalasso spa. It is a bit more dowdy and seems less "Basque" than its southern neighbor, Saint Jean de Luz, just 10 miles down the coast.

Though only about half the size of Biarritz, Saint Jean de Luz (population approx. 14000) is more dynamic, largely due to its thriving fishing port which provides an interesting contrast with the historic center where several stately houses from the 17th and 18th centuries still attest to its rich past, much of it created by shipowners and corsaires (pirates in the service of the king). Among the town's proudest claims, however, is the fact that future king Louis XIV married the Spanish Infanta Marie-Thérèse here in the church of St. John the Baptist. Although the marriage was contracted for state reasons it seems to have been a relatively happy one, as evidenced by a downcast Louis XIV who said at his wife's death: "This is the only time she has given me trouble". From the mouth of a notorious womanizer I suppose this is a compliment.

St. Jean de Luz is situated in a corner of the Bay of Biscay where frequent storms used to cause serious damage until in the 19th century three large dikes were built offshore to break the waves and protect the seafront. Every year some 50 tons of boulders are sunk to replace those displaced or swept away by turbulent seas. As a result, Saint Jean de Luz can boast one of the best beaches along the southwestern Atlantic coast which, along with its Basque-style houses, its exceptional church of St. John the Baptist, and its proximity to Spain makes it an attractive destination.

The third and no doubt the grandest seaside resort on our Bay of Biscay itinerary was San Sebastian/Donostia, a provincial capital of some 180,000 souls on the Spanish Côte Basque, barely 20 miles south-west of Saint Jean de Luz. Here we are in Euskal Herria, the Basque Country, a proud and independent place where Spain is strangely absent and only the Basque flag flies from government buildings. Many road signs and other directions are written in Euskadi only, a strange language full of k's and x's and resembling no other. A certain harshness or belligerence seems to speak to you from the banners on some windows or balconies, but soon these thoughts are wiped from your mind as you approach the bay.

A beautiful wide esplanade with ornate multi-armed Belle Epoque lanterns runs the length of the wide curvy beach, and some impressive 19th century "grands hôtels" still pay testimony to the days when Donostia (as San Sebastian is called here) was the choice of summering Spanish royalty and nobility. To this day, Donostia is considered the chic resort in Spain. 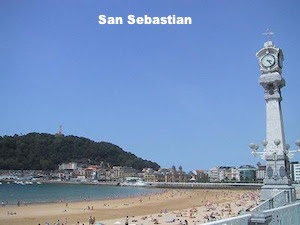 In 1813 a fire destroyed much of the old city and provided the impetus for building a new resort-style city around the bay, à la Biarritz where the new fashion of thalasso therapy was taking hold and drawing royalty. Later developments have included a huge Kursaal which holds a casino as well as a new-technology health center for water cures, and a large university with a modern campus. Recently, San Sebastian/Donostia was named (together with the Polish city of Wroclaw) European Capital of Culture in 2016, beating fellow candidates Burgos, Cordoba, Las Palmas, Segovia and Zaragoza.

Notwithstanding a recent decision by the French Supreme Court that found that bullfights where bulls are killed are constitutional in France, anti-corrida forces are having none of it and are organizing protests. In its edition of 20 October French daily Libération reported that 300 (police estimate) to 1100 (organizers' estimate) protesters marched in Paris to demand an end to the "torture of bulls". Forty Belgian demonstrators had made the trip to Paris to join in the march. An estimated 300 protesters marched in Nîmes, clad in black T-shirts that read "Corrida? Non, Merci!", and in Toulouse some 200-300 people demonstrated on the Place du Capitole to demand the abolition of bullfighting.

Various animal-protection groups have vowed to "keep the pressure on" until their demands are met. It seems that the legal response was not the last word on the matter. Or as they say elsewhere: "It ain't over until the fat lady sings".

In my last blog I mentioned that the city of Marseilles "gave" France its national anthem, La Marseillaise. A correction may be in order, since the French national anthem was written in Strasbourg in April 1792 by French army engineer Rouget de Lisle in response to the declaration of war between France and Austria. He named his creation "War Song for the Rhine Army" in honor of his garrison. Several months later a group of revolutionary soldiers in Marseilles volunteered to join the Tuileries uprising in Paris and set off on foot while singing this war song. When they arrived in Paris on July 30, 1792 the stirring song caught on and was renamed "La Marseillaise". On July 14, 1795 it was officially designated as national anthem of France.

Posted by Anne-Marie Simons at 3:14 AM