After the re-election of President Barack Obama in the United States − roundly applauded in Europe − we can now turn to the recent French vote on November 18th for the leadership of the conservative opposition UMP party which was hotly contested between moderate François Fillon (Nicolas Sarkozy's Prime Minister) and more aggressively right-leaning Jean-François Copé, mayor and National Assembly deputy of the city of Meaux. So close was the race that it took two days to count and recount the votes and declare Copé the winner by a mere 98 votes out of the nearly 175,000 votes cast by party members. Fillon, with five years of proven statesmanship behind him, was considered more likely to win, but as the battle heated up Copé began to court the extreme right where he found enough support, particularly on immigration issues, to make the difference. A disappointed Fillon spoke of une fracture politique et morale within the party, and on November 21 demanded a new recount of the votes, claiming that the final tally did not take into account the votes of three overseas French territories. He also asked that UMP heavyweight and former French foreign minister Alain Juppé take over as interim party leader. Copé has contested the recount. Whoever wins this final skirmish will have a difficult time leading a UMP party that is split right down the middle.

This election was a near replay of the bruising battle for the Socialist Party's presidency in 2008 between rival candidates Ségolène Royal and Martine Aubry which was close until the very end, when Aubry finally beat Royal by just 102 votes.

Rachida Dati, 47, former French Minister of Justice and currently member of the European Parliament as well as mayor of the 7th arrondissement of Paris, is involved in a battle of her own. While serving in Nicolas Sarkozy's government, Superwoman Dati (as she was sometimes called) − gorgeous, smart and single − fell pregnant and gave birth to a daughter on January 2, 2009. The father was not named. Two days later she was back at work, which was met with a mix of admiration and scorn in this country with long paid maternity leave. Given her striking looks and stylish clothes, she was one of the most photographed public officials in France until in a government reshuffle she lost her job as Justice Minister and Keeper of the Seals and was named to the European Parliament in Strasbourg − far from the limelight.

Well, she's back in view and in a fighting mood. On November 5th she filed a paternity suit against Dominique Desseigne, rich widower and head of a chain of casinos and luxury hotels. Desseigne (68) has denied he is the father of the child and refuses to take a test that would confirm or rule out his paternity. He is perceived as a ladies' man with many conquests to his name since the death of his wife in 2001, but he claims that during their brief romance in 2008 Dati had eight other boyfriends − among them a TV host, a government minister, a brother of Nicolas Sarkozy, former Spanish prime minister Jose Maria Aznar, the Qatari Attorney General, and the heir to a luxury goods empire. 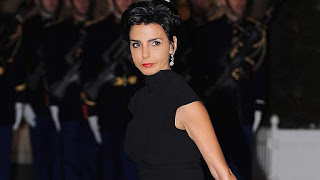 The court in Versailles will pronounce itself on the matter on December 4th. Meanwhile, the topic has been widely covered by newspapers and magazines, providing a welcome change from the Hollande-Trierweiler gossip which appears to be finally running out of steam.

Since we're on the topic, on October 19th former Italian prime minister Silvio Berlusconi appeared in a Milanese courtroom to testify in the Rubygate case and deny the charges against him of paying a teenage prostitute for sex and later using his influence to have her freed from detention because, as he said, "she is the niece of President Mubarak of Egypt and holding her could create a diplomatic incident." The girl in question, Moroccan-born belly-dancer Karima el-Mahroug, was 17 at the time of the alleged facts.

One week later, however, another criminal court in Milan convicted Berlusconi of tax fraud and sentenced him to jail for four years, reduced to one year due to the statute of limitations. It is Berlusconi's first-ever conviction in nearly twenty years of legal proceedings and three convictions which were overturned on appeal or ran into the statute of limitations. This time again, nobody expects him to go to jail, given the slowness of the three-tier judicial system in Italy which allows the defendant two levels of appeal during which time the statute of limitations usually kicks in. Moreover, Italian courts rarely jail a person over 70 years of age which puts Berlusconi, 76, safely beyond the jailers' grasp.

On 13 November, six months after his election, President François Hollande held his first general press conference at the Elysée Palace. A somewhat bumbling start of his administration, including a prime minister who has had to correct or retract a number of his public statements, has resulted in the perception of ineptitude. After initial efforts to contrast his "normal" presidency with Nicolas Sarkozy's frenetic style, which largely misfired, Hollande had been keeping a low profile. Hence, his televised press conference was eagerly awaited, especially his plans for a €30 billion cut in public spending to bring down the deficit to 3% of GDP next year.

Faced with overstretched public finances, near-zero growth and a huge trade deficit, Hollande must effect deep structural reforms and boost competitiveness by reducing the cost of labor. Aware of his low approval ratings, Hollande made a great effort to appear presidential and reassure the nation that he had things under control. Don't judge me now, he asked, but at the end of my term when I promise that young people will be better off than they are today. He did indeed look presidential and seemed to have gained in confidence, but his "wait-and-see" answers did not seem to reassure. This Socialist president will be judged harshly on his budget cuts, including his proposed increase in VAT sales tax to lighten the tax burden on businesses, expected cuts in welfare and increased tax rates across the board to help lower the deficit. It does not square with his campaign promises.

The death and destruction caused by recent super-storm Sandy in the Caribbean and along the northeast United States − just a year after hurricane Irene hit the same area and after Katrina devastated New Orleans in 2005 − has put the issue of global warming squarely back on the political agenda. As scientific debate continues it seems generally agreed today that global warming helps trigger alarming extremes in weather patterns and rising sea levels. Even though both of the U.S. presidential candidates avoided the issue in their campaigns, we may hope that President Obama or his representatives at the Doha climate talks later on this month will make some serious proposals and commitments to the fight to reverse this warming trend.

One afterthought:  In the various reports I read or heard about the ravages of Sandy, there never was any mention of the fact that in the United States overhead power lines are still very common outside city centers while in Europe they are rare. Since storms are not rare and often knock down trees and power lines, causing power outages which can last days, these recurring incidents are costly and at the very least disruptive. I remember that in Washington, DC, where trees have rather shallow root systems, fallen trees and power failures were a regular occurrence, and the fireworks caused by downed power lines in Queens that caused 120 houses to burn to the ground were clear evidence of their potential danger. The cost of putting power lines underground cannot possibly outweigh the tragedy of these fires.

While Europe has suffered less storm damage than the United States, massive floods in Poland in 2010 as well as increasingly frequent floods in the UK, Italy and France, and periods of serious drought in Spain and Portugal, are a source of concern to environmentalists. In the night of October 28th, unusually strong winds tore the large ferry boat Napoleon Bonaparte (2650 passengers, 708 cars) from its moorings in Marseilles where it crashed against a wharf, tearing a 30-meter gash in its hull below the water line and flooding two airtight compartments. There were no injuries but it was feared that fuel oil might leak into the bay of Marseilles. No such leaks have occurred to date, and efforts to right the listing boat and move it are continuing.

And on November 12th in Venice, which floods regularly and where aqua alta is part of the local landscape, heavy rains and strong winds flooded more than 70% of the lagoon city with over five feet of water, one of the highest flood levels ever measured. Tourists were seen swimming in St. Mark's Square.

Mother Nature seems very perturbed, indeed, and we ought to be listening.

Cyprus, the European Union's third-smallest economy, has asked for a bailout from the Troika (European Commission, European Central Bank and International Monetary Fund) last June in order to save a number of banks hard hit by losses on bad Greek debt. The Troika's current discussions have now hit a snag in the form of a report by the German foreign intelligence service (BND). According to the November 5 issue of German magazine Der Spiegel, the secret BND report estimates that Russian oligarchs, businessmen and mafiosi have deposited over €20 billion (more than the €18 billion Cyprus GDP) in Cypriot banks for money laundering purposes.

Generous provisions are made for rich Russians to obtain Cypriot citizenship, the report alleges, and to date 80 Russian oligarchs have done so. An estimated 35,000-40,000 Russians now live in the attractive port city of Limassol, which has earned the resort the nickname of Limassolgrad. There is a Russian newspaper here, two Russian schools and a radio station.

A €10-€12 billion rescue package is at stake, but the Troika's dilemma now is: Do we rescue Russian oligarchs and mafiosi who have invested illegal money in Cypriot banks? Stand by for the answer... 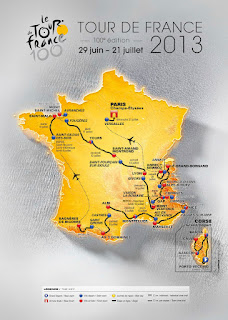 Next year's 100th Tour de France will take off in Corsica on 29 June 2013.  The sixth étape - 176 km between Aix and Montpellier - will depart from Aix-en-Provence on July 4th. The last time the Tour came through Aix was 51 years ago.

A wave of Tour-mad fans and its surrounding circus is expected to roll into town where the annual Opera Festival and the International Economic Forum will be taking place at the same time. It will be a logistical challenge for the city of Aix-en-Provence where even in normal times hotel rooms are hard to get during the month of July. Apparently, some local hotels are already fully booked, so if you have any contacts in the area, you may want to start calling and get re-acquainted.

Posted by Anne-Marie Simons at 9:37 AM