This month started with a wave of demonstrations against layoffs and factory closings. The picture is indeed rather bleak. On January 31st Goodyear announced that after five years of unsuccessful negotiations with unions, it would be closing its tire plant in Amiens, putting 1173 people out of work. In response, the powerful CGT union called for a strike but nobody really believes in a positive outcome. In 2010 tire maker Continental had already closed its factory in Clairvoi with a loss of 1120 jobs. Here as elsewhere, the car industry, the tire industry and all their subcontractors have been hard hit by the economic crisis.

Swiss oil company Petroplus announced the closing of its refinery in Petit Couronne in Seine Maritime when no viable buyer was found by the deadline of February 5th. Though disappointing, this was not unexpected since France counts no less than eleven refineries and suffers from overproduction. Coming on the heels of the recent closing of a steel mill in Lorraine and scheduled massive layoffs by French automakers Peugeot-Citroën and Renault over the coming years, a mood of pessimism and gloom is gaining.

The Virgin Megastore on the Champs Elysées closed last month (1000 jobs), and this past week a strike at newspaper distributor Presstalis stopped the distribution of all major dailies (Le Monde, Le Figaro, Libération, Les Echos...), causing a virtual blackout of the paper press for several days. Kiosk holders, who earn only a small commission on sales, were the first victims and several of them in Paris closed up during the strike. Newspaper publishers unanimously condemned this new strike − the 25th in the past four months according to Les Echos − and reminded the strikers that they have the survival of the printed press in their hands. Already under pressure from the internet and the increasing number of free daily papers, the publishers warned the unions of the potentially fatal effect of their ceaseless strikes, but so far the large CGT union is holding firm.

All in all, since 2009 more than 1100 factories have closed in France, usually due to high labor costs and the strong euro. Though very costly, strikes are still the way labor disputes are settled in France. La grogne (discontent) is expressed in the street and only after severe disruption do the opposing parties sit down and work out some sort of agreement. 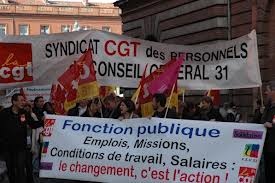 In addition to industry, there is unrest in the public sector, and for the first time in Hollande's presidency thousands of "fonctionnaires d'Etat" (civil servants) took to the streets in Paris to protest against their loss of buying power (salaries have been frozen since 2010) and against the continuing cutbacks in all public service sectors (state and local government and hospitals) started by president Sarkozy. France has 5.2 million fonctionnaires who overwhelmingly voted for François Hollande. They are disappointed in their new president and are reminding him of his campaign promises. A week earlier public school teachers had demonstrated against a government plan to change elementary school schedules from four days to four-and-a half days per week, bringing back the Wednesday morning in exchange for slightly shorter school hours on the other four weekdays.

Hollande, meanwhile, is bound by the European Commission to reduce the State budget. The rock and the hard place come to mind. 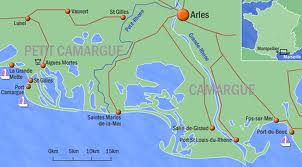 The Camargue is a well preserved wilderness area in southwestern France, located in the 360 square-mile area of the Rhône delta between Arles and the Mediterranean. Its northern part contains agrarian land that produces rice and cereals, while the south produces salt. The remainder, some two-thirds of the entire delta, was set aside as a nature reservation and given National Park status in 1927. Consisting largely of marshland and lagoons, it is known for its wild horses, its rich biodiversity and for being the sole breeding ground of pink flamingos in Europe. 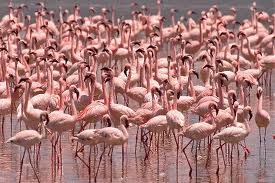 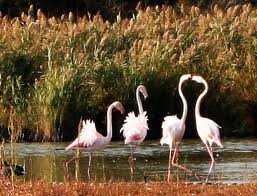 Every year in spring, on their way back from Africa, the flamingos gather on an island located in the Fangassier salt-water basin, safe from predators, which provides an ideal natural breeding ground. But today the Fangassier basin is so heavily polluted that the flamingos are endangered. This basin receives its water from the Versadou canal into which flows the heavily polluted runoff of the rice fields up north. Recent studies show that the rice growers have long been exceeding the legal levels of herbicides and pesticides, killing the small crustaceans on which the flamingos feed. The situation appears to be critical enough that the Nature Conservatory that manages the Camargue has decided to shut down the pumps from the Versadou canal, thereby reducing the water level of the Fangassier lagoon. Various solutions are being studied:  building a new island in a different lagoon farther south and reducing the pollution from rice growing, but they will take time to implement and it is feared that the flamingos may stay away this year and perhaps not come back. It would be a great loss and a risk to the delicate eco-balance of the Camargue, as well as a stain on the memory of count Folco de Baroncelli (1869-1943), who spent a lifetime and his family fortune to preserve the Camargue wilderness.

In early February the Roman Catholic church celebrates two events in Provence that are a boon for bakeries. On the second of this month, during the celebration of La Chandeleur (Candlemas) in the church of St. Victor in Marseilles, the archbishop blesses the traditional Navettes − the boat-shaped cookies typical of Marseilles. Legend has it that their shape represents the boat which brought Lazarus, St. Maximin and the Saintes Maries (Mary Magdalen, Mary Salomé and Mary Jacobé) to the Provençal shores where they began to spread Christianity. The famous rosewater-flavored pastry was invented by a local baker in 1781 and has never lost its popularity.

On February 5th the Provençal village of Maillane celebrates its patron saint Agatha with brioches baked in the form of a female breast, commemorating the martyrdom of Agatha whose breasts were cut off.

Throughout the month of January French bakeries do brisk business with their Galette des Rois, a round flat pie filled with almond paste, which celebrates the arrival of the Three Magi in Bethlehem. And Aix's famous sweet, the Calisson, originated in a local church when in 1629 Aix was spared from the plague by its patron saint, the Virgin of the Seds. Since no bread was available, during communion a soft almond paste candy was handed out from the chalice (calisse) − ever after to be known as the Calisson.

This may be a lay country, but the link between food and the church survives.

(*) To read more about the Camargue in 'Taking Root in Provence' click here: