President François Hollande has been having bad press for a while but the war in Mali has given him an unexpected boost. His decisive and rapid action in the face of a serious jihadist threat in Mali earned him approval at home and abroad. After his television address of January 11th, the  Journal du Dimanche expressed it most succinctly with its headline: Finally President! Until then, Hollande had generally been perceived as soft and hesitant, but his strong response to the terrorist threat in Mali changed all that. At least initially. As time went by and absent any significant aid from European partners and little more than verbal support from the US, warning voices began to be heard about a potential French Afghanistan, an "unwinnable war" and one too costly to be entered into in the current economic climate. Yet, as the French Minister of Defense reminded us, the Malian government had urgently requested help from France against an advancing army of Islamic extremists that had already occupied the sparsely populated north of the country and was two days away from overrunning the capital of Bamako in the south. The rapid spread of Islamic extremism from the east toward Northern and Western Africa concerns us all, he said, and needed to be stopped. 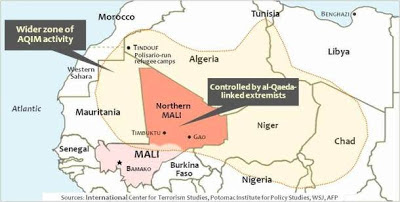 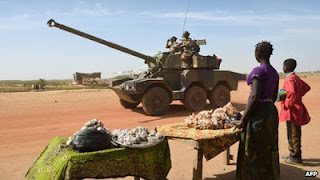 With the death of Osama Ben Laden his terrorist network has taken a blow, but some of its forces have regrouped and moved westward where various cells have been operating in Yemen, Somalia, and now Mali. The AQIM cell (Al Qaida in Maghreb) is well-equipped with modern weapons taken from the well-stocked arsenals of Muammar Gaddafi in Libya and has been applying Sharia law along its path while kidnapping westerners for ransom, among them many Frenchmen who work for large companies in the area such as nuclear giant Areva with interests in uranium mines. While looking for a political solution involving the UN Security Council as well as local and international participants, France, helped only by some Togolese troops and a poorly trained Malian army, is fighting a lonely battle.

On 22 January 1963 General de Gaulle and Konrad Adenauer met in Paris to sign the Elysée Treaty which officially sealed the Franco-German reconciliation, and fifty years later President François Hollande joined Angela Merkel in Berlin to commemorate its birthday. As treaties go, this one has held up longer than General de Gaulle might have expected when he said that treaties are like young girls and roses: they have but a short bloom.


Throughout history the two countries have repeatedly been at war with each other and even today they have their pronounced political and cultural differences. But together they form the engine of Europe and they do need each other. So here's to the Elysée Treaty and its continued flowering.

As President Hollande was in Berlin on January 22nd he was spared the noxious cloud that spread over Paris and a wide swath of northwestern France and southern England that day as a result of a problem at the Lubrizol chemical plant in Rouen, Normandy. This plant produces mercaptan, an additive to odorless gas so that it can be detected. First reports indicated that an unexpected chain reaction had occurred in a large vat of chemicals, which caused a malodorous gas to escape and be carried by winds as far north as London and south to Paris. Thousands of people reported a strong rotten-egg odor, and some complained of headaches and nausea. 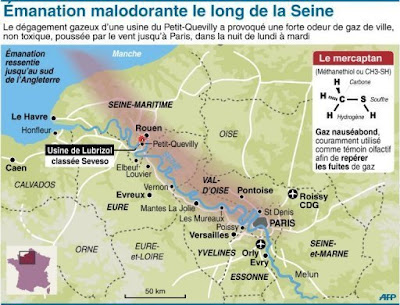 Delphine Batho, French Minister of the Environment, visited the site and reported that it would take several days to neutralize the stink but that the escaped gas presented no health hazard. The American-owned Lubrizol is a "Seveso" plant - a reference to the Italian town of Seveso where a chemical accident occurred in 1976 that resulted in stringent industrial safety measures known as the Seveso II Directive. The EELV Green Party and the Robin Hood Association have called for an investigation into the cause of the accident and Lubrizol's potential responsibility.

In a meeting of European Finance Ministers in Brussels on 21 January, Dutch Finance Minister Jeroen Dijsselbloem, 46, was elected President of the Eurogroup, the guiding body of the European Monetary Union, for a term of two and a half years. He replaces outgoing president Jean-Claude Juncker of Luxembourg who held the position for eight years. In the often tense environment of the European Monetary Union Dijsselbloem's proven diplomatic skills won out over his relative lack of experience (he has been Dutch Finance Minister for only three months). He emerged as the compromise candidate among the main European political groups and between the economically stronger and weaker European countries.

During the same meeting in Brussels the Eurozone Finance Ministers decided to postpone a decision on the Cyprus bank bailout until after the Cypriot elections in February.

Despite a non-disclosure agreement signed by both parties in New York last December, French newspaper Le Journal du Dimanche disclosed on 21 January that it has obtained information from sources close to Strauss-Kahn indicating that he paid hotel maid Nafissatou Diallo a sum of 1.5 million dollars to settle her civil suit against him. 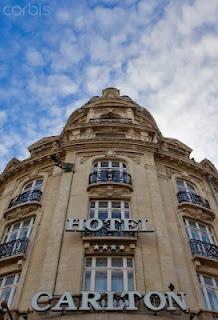 Meanwhile, on January 24th DSK appeared again in court in the northern city of Lille where he was confronted with Jade, an escort girl and plaintiff in the Carlton Affair. The court is trying to determine whether DSK took an active role in organizing the sex parties that were held for his benefit in Paris and Washington with prostitutes supplied by Dominique Alderweireld, a French pimp who runs a prostitution ring in Belgium. To date, nine people including Alderweireld and his girlfriend have been indicted in the Carlton Affair. The vertiginous fall of former IMF chief Strauss-Kahn from moving among world leaders and having a clear shot at the French presidency to being judged for aggravated pimping in the company of a low-life hustler nicknamed "Dodo la Saumure" is the stuff of nightmares. Or a bad B-movie.

The most vociferously discussed subject in France this month was the gay marriage bill proposed by President Hollande that will be voted on by lawmakers on January 29th. During his presidential campaign François Hollande had promised to legalize gay marriage within a year of taking office in May 2012.

The subject is a controversial one in France, opposed by Roman Catholic, Muslim and Jewish leaders and a large conservative block of voters. Many mayors, in deference to their local constituencies, announced that they would not officiate gay marriages, to which Hollande (befitting his indecisiveness) responded that they did not need to and could delegate the task. This only muddled the issue and caused a backlash from those in favor, so Hollande had to backtrack and finally declare that the law applies to all, including mayors who are representatives of the State - whether they like it or not.

Two large demonstrations - for and against marriage equality - took place in Paris two weeks apart. On January 13th more than 300,000 vocal opponents gathered in Paris calling for a vote against the law that would grant same-sex couples the same marriage and adoption rights as straight couples. Two weeks later, proponents held a counter-demonstration to defend legalization of marriage equality. Many celebrities showed up, including Valérie Trierweiler, unmarried partner of President Hollande.

The issue remains divisive, but the latest IFOP poll indicates that today 63% of the French are in favor of same-sex marriage, up from 60% a month ago. The bill is expected to be passed by Parliament.