Most major cities of the world celebrate the arrival of the New Year with fireworks but Paris reserves its fireworks for the national holiday on the 14th of July, when France commemorates the storming of the Bastille prison on 14 July 1789. Nevertheless, the French skies do light up on December 31st when not far from Paris - notably in the poorer Parisian suburbs and the area around Strasbourg - more than a thousand cars are set afire every New Year's Eve. Minister of the Interior Manuel Valls announced in December that he would reveal the number of vehicles burned "because the French people have a right to know", contrary to former president Sarkozy's decision to withhold this information for fear of provoking a competition between rival gangs to outdo each other.

In spite of a strong police presence in the most vulnerable areas, and Minister Valls's denouncing this form of New Year's arson as "an intolerable form of violence against property", he revealed a tally of 1,193 vehicles that were burned this New Year's Eve, slightly more than President Sarkozy's figure of 1,147 on 31 December 2009, the last time his government announced the arson figures. "There's been no notable change in arson over the past few years", said Valls at a news conference, without further comment on what looks like a uniquely French phenomenon. Another exception française?

TO RUSSIA WITH LOVE

When 64-year-old French actor Gerard Depardieu became a tax exile in Belgium last month, French Prime Minister Jean-Marc Ayrault called his behavior "pathetic". In response an angry Depardieu announced he would apply for a Belgian passport. No need to wait for Belgium, however, since personal friend Vladimir Putin then offered Depardieu a Russian passport "for the asking". Depardieu asked and on January 6th, when he arrived in the Black Sea town of Sochi where Putin was vacationing, he received a Russian passport directly from the hands of his benefactor. They bear-hugged like long-lost friends and praised each other in front of the press, who promptly began referring to Depardieu as "a Russian actor of French origin". 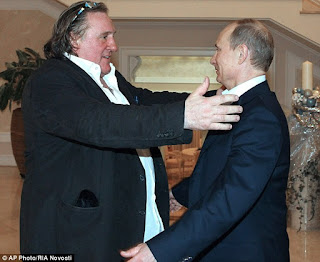 Depardieu told Russian journalists that he loves Putin and that this is mutual, and he called Russia a great democracy, adding: "this is a great country where the prime minister does not call a fellow citizen pathetic", indicating how deeply offended he had been by that remark. No word about the fact that in Russia there is a flat income tax of 13%, which beats even Belgium as a tax refuge.


Two days later he visited Saransk, capital city of Mordovia, 300 miles east of Moscow, where he was given a hero's welcome by the governor and other officials and offered a free apartment. It is not known whether Depardieu has accepted taking up residence in this area noted mostly for its prison camps, where today 23-year-old Nadezhda Tolokonnikova. leader of the Pussy Riot band, is purging a 2-year sentence.

The financial benefit to Depardieu is obvious, but Putin may be the bigger winner. He tweaked the nose of President Hollande and his 75% tax on millionaires*, and turned the event into a huge publicity stunt for Russia as a welcoming tax haven for rich Europeans. Not everybody shared Putin's excitement, however. Russian filmmaker Stanislav Govorukhin commented with a shrug: "One more alcoholic in Russia." 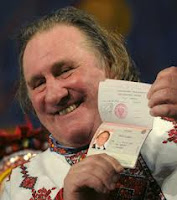 It is no secret that Depardieu loves his alcohol. He failed to show up in a Paris court on January 8th following a drunk driving charge in November when he fell off his scooter in Paris one afternoon with an alcohol level three times the legal limit. He did not contest the charges, but his lawyer said the actor could not appear in court because he had a meeting abroad with the producers of a film about Dominique Strauss-Kahn wherein he is to play the lead role. The drunk driving case will now be referred to a criminal court.

[* On December 29th, the French Constitutional Council rejected President Hollande's 75% tax on millionaires as unconstitutional. It was a crushing defeat for Hollande who had made this "tax on the rich" one of his campaign promises. Finance Minister Pierre Moscovici said that he would seek other ways to impose higher taxes on the rich and that he would resubmit a tax-increase proposal for 2013 and 2014. ]

Days after Depardieu's noisy departure from France, Brigitte Bardot announced that she was ready to follow him and leave France which she considers "nothing but an animal cemetery today". Noted for her longtime commitment to animal rights, she denounced the planned euthanasia in the Lyons zoo of two old female elephants that were said to suffer from tuberculosis, a diagnosis she contests.

If the elephants are put to death over her objections, she said she will leave France for Russia. It is not sure that Russia, where she is not as well known as flamboyant Depardieu, will be inclined to give any special consideration to her application for citizenship.

After a summit meeting in Brussels on December 21st, Vladimir Putin announced to reporters that he sees a role for Russia in the resolution of the banking crisis in Cyprus, given Russia's bulging foreign exchange reserves and financial muscle. An initial bailout proposal approved by the Troika (European Commission, European Central Bank and IMF) last December has run into objections by Bundestag members in Berlin who refuse to guarantee the deposits of Russian tax evaders in Cypriot banks. Carsten Schneider, budget spokesman for the opposition Social Democratic Party said: "We will not allow the money of German taxpayers to insure Russian black money deposits". Moscow's support for a bailout would lower the EU's exposure and minimize the controversy. The size of the Cypriot bailout will not be known until late January.

On January 7th, Silvio Berlusconi announced that he has entered into an alliance with the right-wing Northern League party, his former partner in three earlier governments. This coalition between Berlusconi's PDL party and the Northern League opens the way to a three-way election split between the center-left of Pier Luigi Bersani, the center represented by Mario Monti, and the right - with a chance of no outright victory for either. Recent polls still predict victory for Bersani's left-wing coalition, but even if Berlusconi is unlikely to win, he can certainly spoil.


Scrappy fighter Berlusconi has won numerous battles in his day, but at least one victory seems to have gone to his former wife Veronica Lario who won a divorce settlement of $36 million per year against her former husband, making this divorce settlement the most expensive one on record. Berlusconi called the three female magistrates in Milan feminists and communists. Veronica Lario, who married Berlusconi in 1990, filed for divorce in 2009. They have three children.

Highly visible when she was Justice Minister during the Sarkozy presidency, Rachida Dati has been little seen or heard since she was "banned" to a seat in the European Parliament in Strasbourg in the summer of 2009. She re-emerged in the news last November when she filed a paternity suit against the presumed father of her 4-year old daughter Zohra (see my November 2012 blog).


The court in Versailles has now ordered Mr. Dominique Desseigne to submit himself to a paternity test so as to establish with certainty whether or not he has fathered Ms. Dati's child. Are we holding our breath?

The officially sanctioned winter sales started on 9 January this year and will last until 12 February. This may surprise Americans, but in France merchants need governmental permission to sell their stock at reduced prices at summer and winter sales. Not only the starting and ending days of these twice-yearly sales but also the price reductions are checked by inspectors in the interest of consumer protection. Shop owners themselves do not seem to object since they fear concurrence déloyale from chain stores or department stores and are happy to see the government in a protective role. 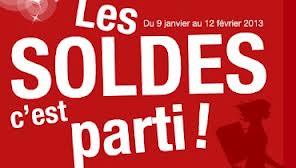 Another surprise to Americans might be the way real estate business is conducted here. Real estate agencies do not share a common data base. They jealously guard their own listings and full commissions against sharing listings and losing part of the commission. The argument of making more money on ten half commissions than on two whole ones is countered by "that's not the way we work". Generally speaking, the French are risk-averse and fear change, which is why la globalisation is so difficult for them. "Tradition" goes a long way here.

The inauguration of Marseille-Provence 2013 Capitale Européenne de la Culture  - in short MP13 - took place on Saturday 12 January in the presence of Jose Manuel Barroso, President of the European Commission, Jean-Marc Ayrault, French Prime Minister, and French Minister of Culture Aurélie Filippetti. Numerous events in cities from Marseilles to Arles marked this opening with joyous parades, acrobats, tightrope walkers, musicians, fireworks and artistic contributions by an international range of artists. For example, Japanese artist Yayoi Kusama, who has had recent retrospectives of her work at the Tate Modern in London, the Whitney in New York, and the Centre Pompidou in Paris, dressed the winter-bare plane trees on the Cours Mirabeau in Aix-en-Provence in colorful cloth. Forty kilometers of polka-dotted fabric was used to wrap sixty plane trees along our main avenue, to great effect. Judge for yourself:  joli, non?


In mid-festivities the flying aces of La Patrouille de France overflew the area in tight formation, painting the skies in red-white-and-blue streamers. Cloudless blue skies and mild temperatures completed the perfect picture on this opening day of MP13 which promises some 400 cultural events to come, showcasing the artistic excellence of Europe and the Mediterranean Basin. I'll be happy to keep you posted.

Posted by Anne-Marie Simons at 8:43 AM