Stéphane Hessel who died recently at age 95 was given a national funeral with military honors. His flag-draped casket was carried into the courtyard of the Invalides in Paris where President Hollande paid a final tribute to the man he called "our conscience, a citizen without borders, a militant without a party, a free man". Some personal testimonies by fellow-combatants and friends followed, and actress Carole Bouquet read a poem by Guillaume Apollinaire before the cortège left for Montparnasse Cemetery where Hessel was buried.

On March 7th a court in Milan sentenced Silvio Berlusconi to one year in prison for the illegal publication in 2005 of a wiretapped telephone conversation that was meant to harm his opponent, center-left politician Piero Fassino. His brother Paolo, who owns the newspaper Il Giornale that published the wiretap, was sentenced to two years and three months in jail. Both men are expected to appeal.

Two other Berlusconi trials, one for fraud and the other for paying for sex with an underage prostitute, are still in the pipeline in the court in Milan. The prostitution case referred to as "Rubygate" is expected to conclude by the end of this month, and an appeals decision on a case relating to television rights of his media company Mediaset may also come down this month.

And there's more: Just a week ago former senator Sergio De Gregorio declared that Berlusconi had paid him €3 million in 2006 for switching to his People of Freedom (PdL) party, which caused the center-left coalition of then Prime Minister Prodi to collapse. This accusation of bribery is being investigated by prosecutors in Naples.

And yet... none of this prevents Berlusconi from participating in discussions starting on March 20th regarding the formation of a new government. After the gridlock caused by last month's inconclusive elections, Berlusconi's center-right coalition is the second-biggest group in parliament and as such plays a vital role in forming a new government.

On March 6th Prime Minister Jean-Marc Ayrault announced the government's approval of the "Super Metro" project that was initiated by President Sarkozy in 2009 but had since been dropped. With slight modifications - resulting in a cost reduction of 3 billion euros - the Nouveau Grand Paris, as the project has been baptized, will consist of 200 km of new lines and 72 new stations, almost doubling the present 213 km of metro lines. The cost of this vast project, which will start in 2015 and be finished in 2030, is 30 billion euros.

A severe snowstorm has hit Northern France and wreaked havoc on road, airport and rail traffic. Normandy and Brittany were particularly hard hit and brought to a virtual standstill. The March 11-12 storm was unexpectedly severe, causing power outages and stranding more than 2000 cars overnight. Paris' two main airports cancelled more than a quarter of their flights. The government formed a crisis committee to deal with the storm and called in the army to help.

France has an excellent public transportation system and seven million people in the surroundings of Paris use it every day to come and work in the city. All this commuter traffic was severely disrupted by the storm, most trains and buses were cancelled, and authorities called on commuters to stay home until public transportation could be re-established. The Eurostar train to London was also cancelled, as well as the Thalys that links Paris to Brussels.

Here and there snowfall of up to 60 cm (24") was reported, mostly in Normandy, with heavy winds and snowdrifts making snow removal difficult. Yet, I could not help wondering how Sweden or Moscow or Canada manages to keep trains running, while France - with its ultra-modern TGV and Eurostar rail systems - cannot keep its equipment from freezing? A young tourist in Paris had similar thoughts when he said "We have tons of snow in Quebec without a problem but a few centimeters of snow here shuts everything down". Perhaps the new crisis committee will have an answer. 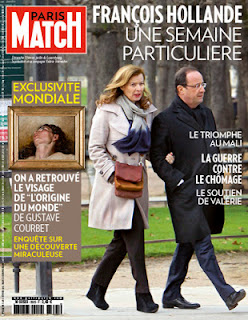 According to French weekly Le Canard Enchainé, President Hollande's girlfriend Valérie Trierweiler had a violent disagreement with her editor Olivier Royant of Paris Match, where Trierweiler is employed as a book reviewer, over the February 7 issue that ran a four-page article about her and Hollande and featured them on their cover walking arm in arm in the Jardin de Luxembourg. When she could not reach Royant, she left him a phone message, reportedly containing terms like "ton journal de merde" and "ces photos de merde". Written by her colleague Mariana Grépinet at Paris Match, the inconsequential article entitled "Parenthèse Amoureuse" described a brief time of relative quiet for the couple before their whirlwind tour to India later that month. Trierweiler allegedly demanded that Grépinet be excluded from the press pool that was to accompany Hollande on the presidential plane to India.

Trierweiler no longer works at the magazine's offices but sends in her column every two weeks, and her relationship with management and co-workers appears tense at best. Insiders say that Royant was shocked at the language Trierweiler used in her message but shrugged it off, saying "She'll get over it".
Nevertheless, she continues to be on the payroll of Paris Match, to the dislike of the magazine's owner Arnaud de Lagardère who is quoted in a recent biography as saying that he had asked that Trierweiler's contract not be renewed at its expiration in late 2012, but that he dropped the idea after president Hollande told him the "she is not really a first lady". In the book Arnaud Lagardère: L'Héritier Qui Voulait Vivre Sa Vie (Ed. Flammarion), journalist Jacqueline Rémy writes that Lagardère, when asked if he considered Trierweiler a plus for his magazine, responded: "Are you kidding? Rather a handicap! Ever since the election of Hollande she has caused us nothing but trouble". 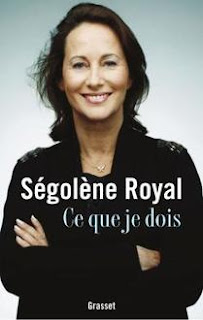 While Trierweiler seems to have a hard time controlling her temper, Ségolène Royal, Hollande's former companion for 28 years and mother of his four children, is showing greater self control and stubbornly continues her efforts to rebuild her political career while avoiding any commentary on the Hollande-Trierweiler couple. She knows it's a slow process - one slippery step at a time.

She just came out with a new book, Ce Que Je Dois, to be published this month, which she describes as an homage to those people, past and present, who have inspired her. It is also an answer, she says, to the questions she was asked after her political and personal defeats suffered in 2011 and 2012, as to how she managed to hold up, to take it on the chin, to find the strength to go on, to stay in politics.

I don't know if this can be called Franglais, but when a new coffee bar just opened in the center of Aix with the name "Smouth Jazz" (pr. smoos jazz) I knew I was not in America. Then again - this might be a play on words (mouth and jazz?) or perhaps a new form of jazz? Any experts out there?

Same novel English on this sign (left) in front of a money exchange on the Cours Mirabeau. Don't say they don't try to please tourists.

Perhaps best of all is some of the English I hear at home: "The bucket stops here" - "Wait, let me pick up my breath" - "I am under the blues" - "Her plants are beautiful; she has a green tooth".  Clear as a bell.

Posted by Anne-Marie Simons at 1:00 PM