For the past few weeks we have been experiencing a heat wave that reminds us of the awful canicule of 2003, when 15,000 elderly people, mostly living alone, died in France, and the then-Minister of Health lost his job due to his mismanagement of the crisis. Today this could not happen again, not only because hospitals are better prepared for a sharp increase of heatstroke patients but also because municipalities keep a close watch on elderly people at risk. 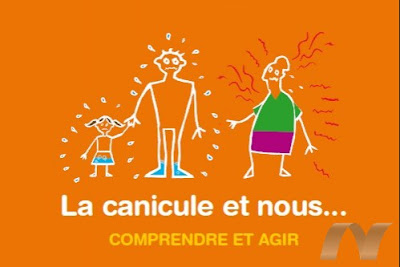 For example, every year now all mayors in France send out letters to their constituents over age 70 (that includes us) to remind them how to avoid dehydration, i.e., stay indoors during the hottest hours, drink a lot of water, keep the shutters closed, etc.  That may sound obvious, but few houses here have air conditioning, and since older people often forget to drink because they don't feel thirsty they dehydrate without knowing it, with potentially fatal consequences. Our mayor's letter also asked for our telephone number so we could be contacted regularly and gave us the option of having a city worker stop by to check on us. We declined the offer, but the daily television news keeps showing us municipal workers phoning the elderly to ask them if their shutters are closed, if they have several days worth of food in the house, if they feel drowsy, if they need anything, etc.

A clear consequence of the tragedy of 2003 is that it has raised public awareness of the fragility of lonely elderly people when they lose their customary daily human contact during the long summer holidays.

Former IMF Director Dominique Strauss-Kahn's chances of a political career in France may be over but he appears to be making a comeback of sorts in the financial world. On July 15th it was announced that he had joined the Board of the Russian Regional Development Bank, a subsidiary of state-owned Rosneft, the largest listed oil company. Last summer, after his separation from his wife Anne Sinclair, he founded Parnasse, an international consulting firm, in Paris. He also acquired a new woman in his life, 45-year old French television executive Myriam l'Aouffir, with whom he is often seen in public, including at this year's' Cannes Film Festival.

Last month, the public prosecutor in the Carlton Affair recommended that the "aggravated pimping" charge against DSK be dropped for lack of evidence. The judges were expected to follow this recommendation. However, on July 26 the two judges in charge of the case announced their decision to reject the prosecutor's recommendation and to send Strauss-Kahn back before the criminal court. It is unusual that a prosecutor's recommendation not be followed, but it appears that the judges acted on a Memorandum to the court filed by a civil party in Lille, L'Equipe d'Action contre le Proxénétisme, who wanted the case to be continued not only for the charge of pimping but also for "concealment of pimping". In their memorandum they cite a similar case in 1994 where a prostitute charged with the same offense was convicted.

A new trial could take place in 2014 and would likely have a negative impact on Strauss-Kahn's business. If convicted, he may be sentenced to 10 years in jail and a fine of €1.5 million. The light at the end of his tunnel just got a little dimmer.

On Sunday, July 21st, the Tour de France ended in Paris with Englishman Chris Froome as winner. Even for those who may not be cycling fans, the colorful ribbon of 160 riders racing up and down the Champs Elysées around the Arc de Triomphe was a beautiful sight and a worthy finale to the 21 stages in Corsica and across mainland France that were rich in spectacular views. 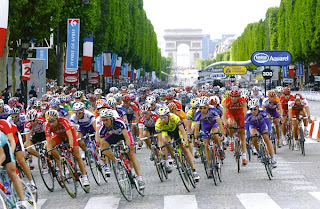 To celebrate this year's 100th anniversary of the Tour, the spectators in Paris received an unusual treat: a flyover by the famous Patrouille de France, the flying aces of the French air force, as well as fireworks that evening.

July 21st is also National Day in Belgium. This year, 79-year-old King Albert II chose that day to abdicate after 20 years on the throne and to pass the reins to his oldest son Philippe. Following the example of Dutch Queen Beatrix who abdicated in April in favor of her son Willem-Alexander, King Albert II, who is not in good health, said the time had come for 53-year-old Philippe, "who has all the qualities to be a good king", to take over.

Philippe, who is known to be painfully shy, is facing the difficult task of keeping a divided country together. Dutch-speaking Flanders and French-speaking Wallonia have long been at odds and after the last elections it took more than 500 days to form a government. In this parliamentary democracy the king's role is largely ceremonial but he has one important constitutional duty, i.e., mediating between the warring parties and maintaining political stability.

The new King Philippe (Filip in Dutch) took his oath in the three official languages of the country, Dutch, French and German (even though only one percent of the population speaks German), illustrating just one aspect of this fractious country of 11 million people. Another one is the growing call for independence by several extremist Flemish groups, who are likely to do well in next year's elections. Their frontrunner, the separatist party Vlaams Belang, boycotted the swearing-in ceremonies.

Fresh from abdicating, former King Albert II will not be able to enjoy a quiet retirement just yet. Last month, 45-year old Belgian artist Delphine Boël, who lives in London, asked the courts to compel Albert and two of his children to give DNA samples in order to establish that she is the illegitimate daughter of Albert and a Belgian aristocrat. For years she had been trying to resolve this matter directly with King Albert but he refused all contact with her and was protected by the immunity accorded to his position as reigning monarch.

Boël maintains that she makes no claim on the royal fortune but that the unresolved question of her birth is complicating her life. "I don't believe that this legal action will put an end to the discrimination against me or my family", she said, "but with DNA proof there will finally be certainty about my identity". Now that the matter is being widely discussed in the press, her mother, Sybille de Selys Longchamps, has spoken to two Belgian newspapers after decades of silence and admitted that she had an 18-year-long affair with Albert. She added that she understood and supported her daughter's efforts to gain recognition.

It is an open secret in Belgium that Albert and his wife Paola, a princess from southern Italy who hated rainy Belgium, lived apart for years in the 1960's and came close to divorcing. The royal palace has neither denied nor confirmed Boël's claim, considering this a private affair. With the recent flurry of media attention and the court's upcoming ruling on the DNA request, the matter will definitely have left the "private" sphere.

As the opera season in Aix-en-Provence is coming to an end, the famous Wagner Festival in Bayreuth, Germany, has just started (July 25-August 28).

This year the Festival celebrates the 200th anniversary of he birth of Richard Wagner and the season's program of seven operas will include the four-part Ring Cycle. The Festival management has always been a Wagner family affair and is today in the hands of Co-Directors
and half sisters Katharina Wagner (35) and Eva Wagner-Pasquier (68), daughters of Richard's grandson Wolfgang Wagner who ran the Festival until his death in 2008, and great granddaughters of founder Richard Wagner himself. [By the way, Eva Wagner-Pasquier, a professional opera manager, was artistic adviser to the Opera Festival of Aix-en-Provence (*) until 2008].

The Wagner sisters are being watched very closely this anniversary year. Of particular interest to Ring lovers (called "Ring-nuts" for their utter devotion) is the appointment of German theatre director Frank Castorf, whose staging is often considered provocative. He was not the sisters' first choice but was asked to step in when filmmaker Wim Wenders bowed out rather late in the game. It is no secret that Castorf considers Bayreuth stuffy and old-fashioned, and that he finds the Wagner sisters lacking in artistic vision. He plans to break some rules and has already announced that "his" Ring will be oil-based. The "Rhine Gold" will be oil, the black gold that represents the Nibelung treasure; his version of "The Valkyrie" takes place in oil-producing Azerbaijan; "Siegfried" will have a huge backdrop of Mount-Rushmore-like heads of Marx, Lenin, Stalin, and Mao, "men who changed the world"; and the "Götterdämmerung" sets will include The New York Stock Exchange and Wall Street "where all fates are decided today".

As audiences and management await this year's Ring with a mix of curiosity and anxiety, the Wagner sisters have not been available for interviews and are no doubt keeping their fingers crossed that the 200th anniversary celebration of their great grandfather's birth will not only withstand Mr. Castorf's re-interpretations but that the impressive stage design will sway any doubters. Whatever the outcome, this Festival promises to be a memorable one.


(*) For more on opera in Aix, check the Opera Festival chapter in my book Taking Root in Provence by clicking here.