After an unusually long winter and the wettest month of May on record, summer has finally arrived and the usual tidal wave of vacationers from the north has again unfurled over the Mediterranean beaches for a month of dolce farniente and fun in the sun. Picturesque villages suddenly echo with more English than French, and Parisians descend again en masse on the Luberon, their preferred vacation area in Provence, where they own or rent a house and mostly visit each other. When it's hot in the south of France, the beaches seem to be for foreigners, the Luberon for Parisians, and the Dordogne favored by the English. No matter where you go, however, culture is never far away, what with festivals, art exhibits and special events on offer everywhere. 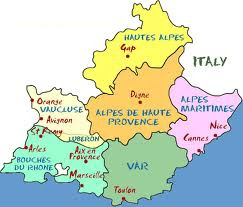 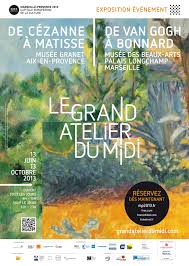 This year, with Marseilles being the Cultural Capital of Europe, the choice is particularly rich and includes a blockbuster art exhibit, LE GRAND ATELIER DU MIDI, spread over two museums that show "From Cézanne to Matisse" in Aix-en-Provence and "From Van Gogh to Bonnard" in Marseilles.

For opera and theatre lovers there are the big summer festivals in Aix and Avignon, each with their diehard followers who faithfully return every year.


Aix-en-Provence opens the ball in June with a month of public Master classes that precede the opera festival of July. Opera being my thing, I am happy to stay in Aix for all five operas, several concerts with major symphony orchestras, and a number of conferences with opera stars, directors or stage designers, before I start looking elsewhere. If I am not sated by then, I may go to Les Chorégies d'Orange for more opera and concerts in the incredible setting of the huge Roman theatre (more than 8000 seats) with its impressive backdrop of a 37-meter-high wall built in the first century AD and still standing! King Louis XIV called this "the most beautiful wall of my kingdom".

The famous theatre festival of Avignon offers more than 1000 plays, running from 10 o'clock in the morning throughout the day and evening for the entire month of July in an incredible burst of theatrical activity. Every form and period is represented, from Greek antiquity to Shakespeare, Racine, Molière or Schiller, Pirandello, Tom Stoppard or Sam Sheppard and avant-garde Belgian provocateur Jan Fabre, across cultures and languages. The town of Avignon literally teems with talent in July, and the occasional flop among this multitude of shows only confirms how much good theatre is being produced today. 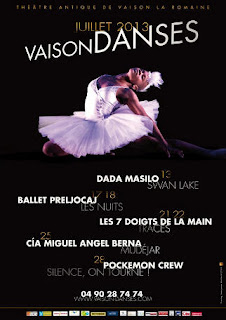 The town of Vaison La Romaine in the department of the Vaucluse organizes a dance festival in its magnificent Roman amphitheatre, where both modern dance and traditional ballet are performed in a truly exceptional site. 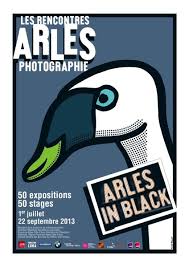 Then there is the international photo festival Les Rencontres d'Arles. This year dedicated to black-and-white photography, this huge show is bound to thrill photo enthusiasts with its 50 exhibits spread over a dozen venues in the town of Arles.

Still not for you?

There is jazz in Marciac, in Antibes, in Nice and elsewhere, often with big American names like Wynton Marsalis or Keith Jarrett, and an international piano festival in the lovely outdoor setting of the Chateau Florans in La Roque d'Anthéron. Chapels and churches throughout the area, including the beautiful Cistercian Abbey of Silvacane, host chamber music concerts and choirs. 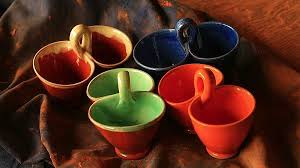 Of course popular culture is not forgotten and folkloric events, with fife and tambourine bands and dancers in Provençal costume, appear regularly in town and village squares, not to mention the colorful markets where potters and painters and basket weavers offer their art amid the local produce and preserves.

Amid this embarras de choix it is hard to keep up with the news, but here are a few items I glimpsed this month: 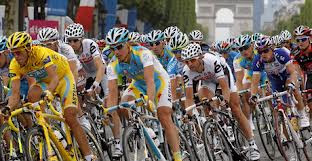 ˜˜˜ The Tour de France. I confess that I am not a follower of this biggest sporting event in France, but it was hard to ignore this year since the Tour came right through Aix-en-Provence. After at least an hour of commercial preliminaries in the form of a long caravan of support vehicles and loudspeaker trucks with young girls throwing candy, fruit juice packs and baseball caps to the crowd, the riders finally arrived at our Rotonde and were gone in a blur before you could get your camera focused. The one thing I remember most clearly is the wooshing sound they made when they passed. Last year saw the first British victory ever when Bradley Wiggins won the Tour, and this year again the English are doing very well, with the prized yellow jersey currently being worn by Chris Froome who won yesterday's toughest and highest climb, the Mont Ventoux. The Tour ends in Paris on July 21.

˜˜˜ The French Constitutional Court has confirmed an earlier ruling by the Electoral Finance Commission that found Nicolas Sarkozy guilty of exceeding the legal spending limit for his 2012 presidential campaign against François Hollande. It ordered Sarkozy to repay a government advance of €150,000 and denied his UMP party reimbursement of some €10 million of campaign expenses from the national Treasury, a heavy sanction for a party that is now short of funds while hoping to take back the presidency in 2017. Sarkozy has yet to announce that he is a candidate for the next presidency but he is widely expected to run.

˜˜˜ Delphine Batho, Minister of the Environment, was fired by President Hollande for having openly criticized the government's latest budget cuts to her department. She was replaced by Philippe Martin, a Deputy from the Gers region.


˜˜˜ Bernard Tapie, French businessman and sometime actor, stands accused of having falsely obtained a payment of €403 million in 2008 from the state-owned Crédit Lyonnais bank. After years of litigation by Tapie who accused the CL of having cheated him in the sale of his Adidas sportswear company in the mid 1990s, the case went to arbitration at the suggestion of then Finance Minister Christine Lagarde, who approved the award. Lagarde, currently head of the IMF, was grilled by prosecutors for two days about her role in assigning this case to arbitration. She was not charged but named an "assisted witness" which indicates that some suspicion remains in the eyes of the court. Her then Chief of Staff Stéphane Richard, on the other hand, has been placed under formal investigation but was allowed to return to his job as CEO of telecommunications company Orange (formerly named France Telecom) with the backing of his Board of Directors and of the State, which owns a 27 percent share of Orange.

The "Affaire Tapie" as well as the colorful Bernard Tapie himself will surely lead to more revelations, and confirm or refute any suspected link with Nicolas Sarkozy on whose watch the arbitrage took place.

Awaiting further developments, I am off to the opera and will get back to you when the music stops.

HAVE A WONDERFUL SUMMER! 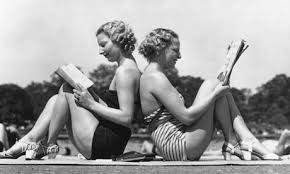 (*)  For more events see the chapter Summer Festivities in my book Taking Root in Provence by clicking here.

Posted by Anne-Marie Simons at 9:44 PM