THE TROUBLE WITH MARSEILLES 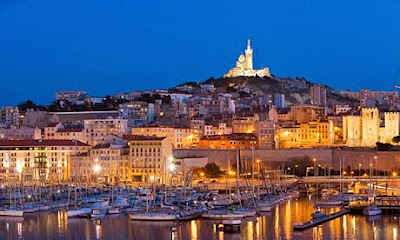 Marseilles, France's second city, is quickly becoming Interior Minister Manuel Valls's First Headache. He just can't get a grip on this crime-plagued city, so different from all others. In spite of increased police power, additional funds, and the appointment of a new Prefect last year, the city registered its 15th homicide for the year on September 5th. That day, in two separate incidents, two men were executed in drug-related reprisals as two helmeted individuals on a scooter pulled up next to a targeted car, shot the driver and disappeared into the traffic. A banal incident by Marseilles standards except that this time one of the victims was the son of a well-known and well-loved local figure: Jose Anigo, coach of the local football club Olympique de Marseille (OM). "This city eats its own children," said Anigo, who deplored his son Adrien's criminal record, including jail time for drug trafficking, and the culture of drug-fueled easy money from which Adrien had been unable to extricate himself.

This time, there was a public outcry, and before the day was over Interior Minister Manuel Valls responded with a call for a concerted effort by local and national officials to unite around a plan of action to end the drug wars in Marseilles. He spoke of a National Pact, headed by Prime Minister Jean-Marc Ayrault, and the duty of elected officials to focus on the tasks at hand: employment for the young; rehabilitation of abandoned neighborhoods; increased video surveillance; fighting school absenteeism. State and local authorities will have to combine forces to overcome the drug traffickers and a certain mindset that have taken hold in Marseilles.

Will it work? Jean-Claude Gaudin, 74-year-old UMP mayor of Marseilles who has had his differences with socialist minister Valls, has buried the hatchet and welcomed a united effort where, he insists, politics will have no place. Given the extent of the problem, it will indeed require an all-out effort, if not divine intervention, to break the back of a well-entrenched drug trafficking business that has long relied on young recruits who as simple lookouts could earn more in a day than their fathers did in a week. With unemployment rates of over 40% in poor neighborhoods, teenage boys quickly learned the ropes and moved up from scouts and lookouts to minor dealers, at risk of severe punishment by their "employers". They also moved from small handguns to kalashnikovs, the weapon of choice of their bosses, and to the subsequent turf wars with their former recruiters which so often end in death, as they did again on September 5th. Nevertheless, a new supply of young recruits is always on hand, and the vicious circle continues... 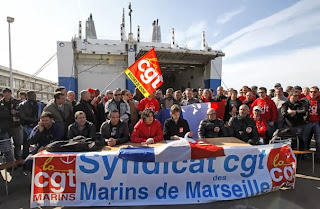 Another problem in Marseilles is its intractable unions, especially the CGT which has a firm grip on the Grand Port de Marseille. They may claim to fight for the rights of dockworkers but are just as often the reason for companies leaving Marseilles or avoiding it altogether. In 2009, in response to a government effort at retirement reform, the CGT called for a 90-day strike, effectively paralyzing the port of Marseilles and causing severe stress on other commerce. Result: if in 1985 Marseilles was still the first container port in the Mediterranean, today it has dropped to 11th place, with Barcelona and Genoa happy to accommodate the frustrated cargo shippers that have had their fill of Marseilles. Strikes by garbage workers are not uncommon either, and in 2007 such a strike was timed to coincide with the visit of the Swiss selection committee for the America's Cup. Piles of rotting garbage quickly convinced the Swiss to choose Valencia over Marseilles.

Marseilles was named European Capital of Culture this year, beating Bordeaux, Lyons and Toulouse in the process. Drugs and gangs seem to exist in a vacuum −the Quartier Nord of this spread-out city− where no outsider ever goes and where drug dealers kill each other.
The same has been said about Washington DC, where drug violence is largely limited to certain poor, all-black, neighborhoods without disturbing the rest of the city.

Marseilles still is the largest commercial port overall in France, a gateway to the trading routes to North Africa and beyond, where cruise ships, cargo ships, and ferries cross each other in the harbor, as well as oil tankers on their way to the nearby oil refinery in Fos-sur-Mer. In spite of its recalcitrant unions and frequent strikes, optimism does prevail. How else to explain the €7 billion Euroméditerranée urban renewal project to renovate a 480-hectare area in the heart of the city? (go to link).  Launched in November 1995, this project is funded by the European Union, the State, the Departmental and Regional councils and the City of Marseilles, and involves €5 billion of private investment. Completed to date are the renovated Gare St. Charles, the downtown infrastructure of tunnels and rerouted traffic lanes around the Vieux Port and its enlarged pedestrian areas, new tramlines, underground garages, the renovation of the Haussmann-style Rue de la République, construction of the Zaha Hadid-designed 147-meter-high glass office tower for CMA-CGM (France's largest shipping company), transformation of the Joliette Docks area into offices, renovation of the Silo into a theater and a number of abandoned buildings into museums. Slated for completion in 2015 is the large Euromed Center that will house, among other things, an ultra-modern multiplex cinema under the direction of moviemaker Luc Besson, a convention center, and a Marriott hotel. ( go to link).

Especially built for the 2013 Cultural Capital of Europe were the eye-catching museums of MuCEM (Museum of the Civilizations of Europe and the Mediterranean) and Villa Méditerranée on the waterfront, as well as the new FRAC (Fonds Régional d'Art Contemporain) museum built by Japanese architect Kengo Kuma in the center, and Norman Foster's Ombrière on the Vieux Port plaza. At a cost of €190 million, €70 million, €21 million, and €45 million, respectively, they are daring and costly additions to the architectural landscape of Marseilles.


Adding the major renovation and extension of the Museum of the History of Marseilles (€20m) and the transformation of the old Station Sanitaire, where newly arrived immigrants were checked, into the museum Regards de Provence (€4m) dedicated to regional art, shows the importance given to art and culture in Marseilles.

Can this possibly be a city in decline, an area to be avoided by tourists, an ungovernable territory taken over by drug lords? Absolutely not.
Granted, drug trafficking does exist but far from the tourist areas, a mafia element does exist but is more interested in Brinks trucks and gambling casinos than in your purse or necklace, and corruption is not unknown either. Case in point: Jean-Noël Guérini, PS Senator and President of the Bouches du Rhône Department, who was expelled from his own party but so far has refused to step down. Already the subject of several criminal investigations, he is currently awaiting trial for embezzlement of public funds, while his brother Alexandre has been convicted and sent to prison for criminal conspiracy.

So what to say about Marseilles?
Throughout history Marseilles has always been a rebellious city and often at odds with the government in Paris. It exasperates and delights in equal measure, like the difficult child in the family. It seems to walk a fine line between its sunny side (natural beauty, ethnic diversity, blessed climate and laid-back lifestyle) and its shady side of sometimes questionable governance and inability to control its unions.

Even allowing for a tainted local government and a certain underworld, the normal business world appears to function rather well here, as evidenced by the successful transformation of the city and the ongoing Euromed project. All things considered, perhaps the biggest surprise of Marseilles is that it functions at all.

(*) To read more about Marseilles, click here for the chapter Surprising Marseilles in my book Taking Root in Provence.