AFFAIRS OF STATE A LA FRANÇAISE


During his televised New Year's wishes on December 31st, President Hollande had announced a Pacte de Responsabilité which he would elaborate on in an upcoming press conference set for January 14, 2014 in the Elysée Palace with 600 journalists in attendance, many of them representing foreign papers. It was to be an opportunity to roll out his economic recovery plan for the next three years. A couple of days before that date, however, the French gossip magazine Closer revealed a secret affair between Mr. Hollande and French actress Julie Gayet, backed up by seven pages of photos. The timing was bad for Hollande, as the press immediately shifted its attention from the economy to the alleged affair, and the first question asked at his press conference was: "Will Valérie Trierweiler remain First Lady of France, especially with respect to your state visit to Washington on February 11th?". The answer was short and final: "This is not the time or place to address this subject, but I will do so before the date you mentioned (2/11)".

The next two hours of the press conference were hugely disappointing to all those foreign correspondents who had come for "the affair" and left empty-handed. Not used to a compliant press at home, they had expected more aggressive questioning and judged the event "way too long for too little". Why, they wonder, is the French press so deferential? Is it the intimidating setting of the Salle des Fêtes in the Elysée Palace, with its excess of gold and glitter and its whiff of Gloire? Or is tough questioning just "not done" because the French president is perceived as a monarch without a crown but with all the trappings of royalty? 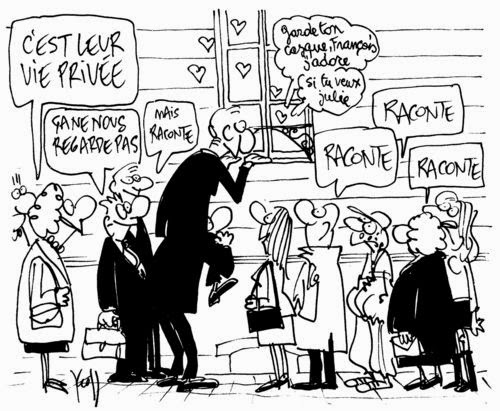 Although the Affair has gone viral and gotten a lot of attention worldwide, in France the reaction was initially rather muted, with man-in-the-street comments ranging from "It's an invasion of privacy" and "We have more important things to think about" to the opinion that celebrities (i.e. presidents) lose their right to privacy when they are constantly in public view, or as this French journalist in a televised debate saw it: "Hollande est un people comme les autres" (using the curious French interpretation of "people" - in the singular - as "celebrity").

Strong privacy laws have long protected presidents in France where having a mistress has been more rule than exception. Jacques Chirac earned the nickname "Monsieur 15 Minutes, shower included", and François Mittérand managed to keep his double life and secret daughter under wraps even after Paris Match magazine discovered the girl and published a photo of her with Mittérand. When faced with this evidence, Mittérand famously said: "So what?" and that was the end of the story, at least during his lifetime. Wife with sons and mistress with daughter all gathered at this funeral. So civilized, so French.

And so impossible today, with the internet, Twitter, cell-phone cameras, a flourishing gutter press and fines that are no longer dissuasive. The French press may have reacted with more restraint than others, it nevertheless covered the matter extensively, if often in the manner of "This is what the foreign press is saying" and then repeating every salacious detail. Even if Le Scandale did not make the front pages of French newspapers (as it did abroad), the story of the affair and subsequent revelations quickly moved from the gossip magazines to the more serious papers, including Le Monde, and to television debates.

There may be a certain French pride in mousy Hollande's conquest of beautiful women (hear the Gallic rooster crowing?); and an element of soap opera in the jealousy fit of Valérie Trierweiler and her Twitter attack last year on Ségolène Royal (mother of Hollande's four children and his partner for nearly 30 years). There also was much mention again of Hollande's stated wish to be a "normal" president, and his promise of total transparency. Sidelined by his claim of privacy, journalists were only too happy to regurgitate all this while awaiting developments.

But when current mistress and First Lady Valérie Trierweiler had a nervous breakdown following news of the affair and was hospitalized, the matter became more serious and more potentially damaging to the president.

Every day new revelations appeared in the papers: Prior to his press conference, Hollande had tried to have Trierweiler sign a joint statement announcing their separation (she refused); the Hollande-Gayet affair had been going on for at least 18 months (not denied); Gayet is pregnant (denied); Trierweiler had suspicions and left her apartment in June to move into the Elysée palace; Last summer Trierweiler vacationed in Greece with her sons, waiting in vain for Hollande who instead took Julie to the south of France; Gayet appointed to prestigious Villa Medici position; Gayet's appointment to Villa Medici cancelled by Ministry of Culture following scandal; Gayet sues Closer magazine; Closer withdraws article and photos from internet; Hollande has not yet visited Trierweiler in hospital (her doctors had not allowed it); Hollande finally visited Trierweiler on day six (with doctors' approval); Trierweiler to remain in hospital for ten days, then perhaps in rest home near Paris; Tryst apartment at 20 rue du Cirque belongs to convicted Corsican criminal (denied by alleged criminal who says he rented the apartment, then left it to his ex-wife who is a friend of Gayet); Bodyguard brings breakfast croissants to Hollande love nest;... and on and on. A trickle every day, until the "private" matter of the president's infidelity had grown into a firestorm that has singed his presidential image and, as some say, caricatured France abroad.

On January 18th Hollande visited the small town of Tulle (pop. 1200) in the Corrèze department of central France where he used to be mayor and deputy, for the formal New Year's wishes to his old constituency. No less than 90 journalists awaited him there in hopes of some response to the growing scandal. In vain − but those from the foreign press (including BBC and The New York Times) now know where to find Tulle on the map.

Two days later, Hollande made his first solo State visit when he visited The Netherlands without Valérie Trierweiler. Accompanied by several of his ministers, he gave a joint press conference with Dutch Prime Minister Mark Rutte in The Hague where, inevitably, he was once again asked if Valérie Trierweiler remained the First Lady of France. His answer: "She is doing better and is currently resting at La Lanterne".


In France too the pressure is mounting. When Interior Minister Manuel Valls was questioned about his responsibility for the safety of Mr. Hollande who made repeated nightly visits to Ms. Gayet on a scooter with only one bodyguard, he said that at no time the president's security had been compromised. At the same time, Claude Bartolone, the powerful president of the French Parliament, expressed his hope that Mr. Hollande and Ms. Trierweiler will soon be able to find a way out of the impasse.

Valérie Trierweiler has asked Mr. Hollande for "urgent clarification" of her situation and, after eight days in La Pitié-Salpêtrière, has left the hospital for La Lanterne, the French presidential country house in Versailles for "further rest". As France's First Lady she has an office at the Elysée Palace with a personal staff of five including a chauffeur, paid for with public funds. She also lives at the Elysée and in an initial response has indicated that she has "no intention to move". Her impetuous nature and jealous disposition have not won her many friends, but her "cold dismissal" in the glare of the media after seven years of cohabitation did not play well, even as a private matter. More publicly, Hollande has been criticized for questionable behavior unworthy of high office, disregard for his personal safety in his pursuit of amorous trysts, and the naiveté of his unrealistic claim to a right of privacy "accorded to all private citizens". As Le Figaro put it: He is no longer a private citizen and owes the French people the decorum attached to his office. Gérard Courtois in Le Monde went even further in speaking of the "inquiétante légèreté" of the president, his distraction from matters of state at a critical time, and "le ridicule de la situation", adding that the president has a professional duty to represent France at home and abroad in the best possible light.

During his January 14 press conference, Hollande promised to answer the First Lady question before February 11th. He is now under pressure to find a quick resolution of this private problem and present it to a panting press that is not likely to let him get away twice with a plea for privacy.

Confronted with a low approval rating in the polls, severe economic problems, and a lack of confidence in his policies, Hollande has a lot of challenges. But perhaps the toughest one of all:  the woman scorned who awaits his decision.

Oh yes, as for that Responsibility Pact...  Naah, you don't really want to know about that. Not until the hottest show in town is over and some sort of normality has returned. Stay tuned ... 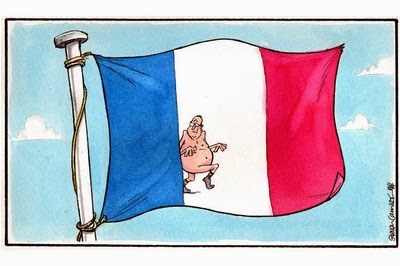