The high drama of President Hollande's messy love life that made front-page news in Europe and beyond has deflated like a tired soufflé. With a simple telephone call to Agence France Presse on January 25th, Hollande announced: "I am making it known that I have put an end to my shared life with Valérie Trierweiler". He added that he was speaking as a private citizen, not as president of France. [How many private citizens would call AFP about their separation, I wonder?]

The next day, Trierweiler left on a two-day trip to India to visit a French charity in Mumbai, Action Against Hunger, and attend a fund-raising dinner at the Taj Mahal Hotel. She made the long-planned trip as a guest of the charity. Just before her departure she fired her attorney, Frédérique Giffard, for having spoken on her behalf without approval by saying that the parties "were trying to resolve this matter in the most dignified way possible". A few days later, it was reported that over lunch at La Lanterne, Hollande and Trierweiler had come to an agreement that left them "on good terms". 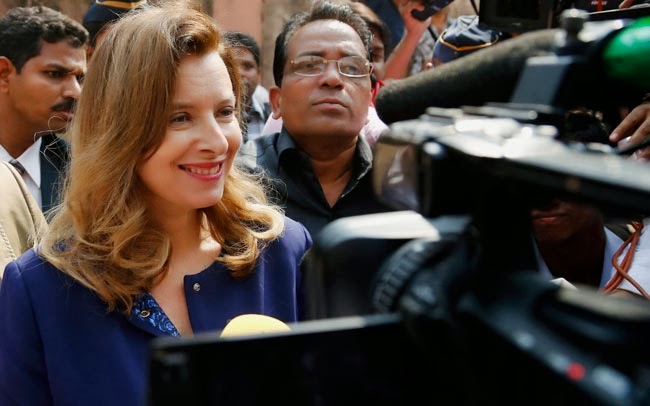 While in Mumbai, a confident-looking Trierweiler spoke to journalists, saying that she was "vaccinated" against the hypocrisy of political life, that she will continue writing her book reviews for Paris Match magazine, and that she was fine. "Don't worry about me".

End of story? Not likely. Having lived through a very public humiliation, and being freed from the restraints imposed by the Elysée, this proud woman may decide to write a book and have the last word. A clue? She refused to sign a joint announcement of the break-up, leading to Hollande's one-sided statement: "...... I have put an end to my shared life with Valérie Trierweiler".

During the recent media frenzy around François Hollande's personal problems, I wondered why the man who has said that he wants a Chinese wall between his public and private life, was not calling upon his official spokesperson to face the press and shield him from some of the unwanted attention. In fact, Moroccan-born Najat Vallaud-Belkacem, 36, Minister of Women's Rights and Spokesperson for the Government, is rather inconspicuous. Her double title seems to indicate that the government does not consider Women's Rights nor Spokesperson to be a full-time job, and at least in the latter capacity Vallaud-Belkacem is rarely seen or heard. When under siege, the president, who is not a natural communicator, has the luxury of having a specialist do the unpleasant job for him. A Spokesperson who rarely speaks seems like a wasted asset.

On January 24, President Hollande paid a visit to Pope Francis in Rome under the cloud of the recent revelations about his private life. Among the delicate topics to be discussed were Gay Marriage, the separation of Church and State, and a petition signed by some 115,000 conservative French Catholics indicating their "profound malaise and growing concern" over the Socialist agenda and the upcoming legislation on expanded abortion rights and on assisted suicide. 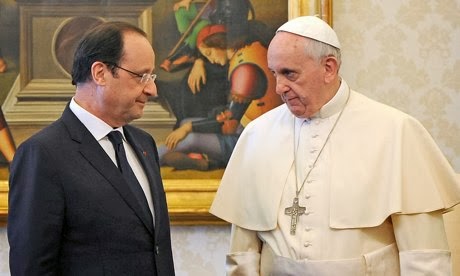 A stern-faced pope greeted a nervous François Hollande for the 35-minute meeting which, as Hollande stated afterwards, focused mostly on points of convergence: the war in Syria, the Central African Republic, and the defense of human dignity. At the end of the audience Hollande offered the pope a book on Saint Francis, "your patron saint". "Yours too", the pope replied, finally smiling.

In an awkward effort to give a positive twist to these figures, Labor Minister Michel Sapin said that employment for the category of workers under the age of 25 had markedly improved, but economists were quick to point out that this improvement was largely due to state-sponsored youth jobs rather than a sign of recovery of the economy. On a state visit to Turkey, President Hollande admitted that he had not succeeded in his attempts to turn unemployment around, but said that he feels that his current measures will bear fruit eventually. 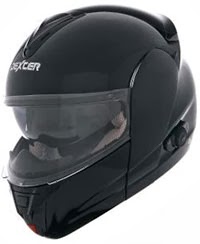 One tiny uptick in the French economy occurred at Motoblouz, the company in the northern Pas-de-Calais region that fabricates the motorcycle helmet that Hollande wore on his nightly escapades. Motoblouz CEO Thomas Thumerelle said it sold 1000 "Dexter" helmets on the day that Closer magazine published the pictures of the president wearing their helmet and that sales continued to be phenomenal. He placed a quarter-page ad in national daily Libération, thanking Mr. Hollande for wearing their helmet for his protection.

Continuous heavy rains have caused extensive damage along the Atlantic and Mediterranean coasts of France. Three people were killed in the Var area, where a rock slide closed the road between Nice and Menton and cut off the ski resort of Isola 2000 for several days.

The towns of Hyères and La-Londe-de-Maures were particularly hard hit when several rivers burst their banks.

Earlier this month torrential rains whipped up by Storm Dirk pummeled and flooded the town of Quimperlé in Brittany which, together with much of Finistère, has been declared a natural disaster area. High waves in Biarritz shattered the glass entrance of the Thalasso spa across the wide seaside promenade, and in the Pyrenées Atlantiques region several villages were flooded and bridges and roads were badly damaged.

Mother Nature may be trying to tell us something, but is anybody listening?

Posted by Anne-Marie Simons at 2:04 AM