SAY IT ISN'T SO!... I can hear the poor people in Bretagne when another Alerte Rouge from Météo France warns them to prepare for a new storm. On February 6th, the southwest part of waterlogged Brittany was hit again by severe floods caused by rain-swollen rivers, high tide and high winds. On the heels of storm Petra, storm Qumaira slammed into previously hard-hit areas of Finistère and Morbihan, leaving the town of Morlaix knee-deep in water for the fourth time in six weeks. The worn-out owner of a restaurant on main street, discouraged by the sight of one meter of muddy water in his restaurant less than 10 days after he had finished cleaning up from the previous storm, said: "We are all dead tired and worried about this extreme weather that affects not only our daily life but also our livelihood. Even if insurance covers much of the cost, clients are not coming back. Fishing boats have not gone out for weeks. Everybody is depressed and worrying about tomorrow."

In the little town of Pontivy in the Morbihan, a 16th-century fortified castle was heavily damaged when a wall, weakened by incessant rain and battering winds, collapsed and fell into the moat. For Chateau de Rohan, a monument classé that has withstood more than four hundred years of natural and human assaults, this was one storm too many.

A day earlier in the Pyrenées Atlantiques, a three-and-a-half ton, 100-meter-long Spanish cargo ship was tossed onto the pier as it tried to enter the port of Anglet and broke in two. The 11 sailors on board were rescued by helicopter. Luckily, the Luno had no cargo on board but its tanks held 80 tons of diesel oil that might spill. Heavy swells and high winds made it impossible to approach the vessel by sea, but after an anxious 24 hours the oil was pumped out and beach pollution in this touristy area avoided.

The issue of gay marriage and adoption is a divisive one in France that drew tens of thousands of people - for and against - onto the streets of Paris last spring. A few months later, Marriage Pour Tous was voted into law by Parliament over strong opposition from conservative Catholics. Today, those against the new law have regrouped and gone back to the streets on February 2nd under the banner Manif Pour Tous (Demonstration for All). In two well-attended marches in Paris and Lyons (500,000 according to organizers, 80,000 according to police, in Paris alone) they waved blue and pink flags depicting the traditional family of father, mother, two children, and protested loudly against the government's plans to allow IVF for same-sex couples and to introduce Gender Theory in elementary schools. The latter issue was largely based on rumors, reportedly spread by right-wing sources, that Minister of Education Vincent Peillon wants to introduce sex education and masturbation to elementary school children. When parents took children out of 100 schools, Peillon denied the rumors and reminded parents of their civic duty to send children to school but gave no further explanation. Stung by their defeat on Gay Marriage last year, the protesters, including a number of Muslims, said their message was the same as last year and they "just want it to be heard". They vowed to put up a fight to preserve the family and to oppose any further degradation of "traditional values". 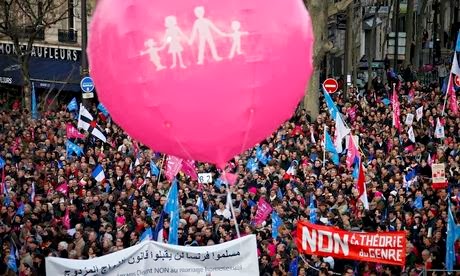 Interior Minister Manuel Valls called the protesters a "Tea Party à la francaise" and nothing indicated that the peaceful demonstration would cause undue worry in government circles, but two days later the Elysée Palace announced that the proposed bill on the Loi de la Famille (including the controversial issue of medically assisted procreation for lesbian couples) that was to go to Parliament in April of this year, would be postponed until 2015, ostensibly due to an overcharged parliamentary calendar, which nobody believes.

Jubilation on the right, embarrassment and division on the left, and a President Hollande who is once again accused of being weak and panicking in the face of opposition. According to a TNS-Sofres poll published on February 6th, his approval rating now stands at an abysmal 19%. 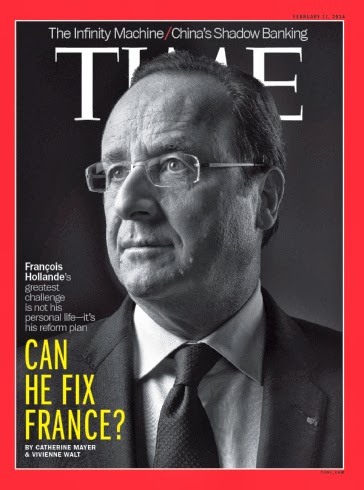 Despite (or because of) his current troubles, François Hollande made the cover of the February 17 issue of TIME magazine. Curiously, the cover was in black and white, looking like an obituary, with the only touch of color being the yellow headline: Can He Fix France? The four-page article by Catherine Mayer and Vivienne Walt doubts that he can, citing such salient facts as "a 77% slump in foreign investment in France in 2013, vs. a 37% rise in Spain and a nearly 400% jump in Germany" and "the public sector represents 57% of GDP, making the government the largest employer in France".

On the other hand, Hollande's recent Responsibility Pact which will significantly reduce French companies' social charges by the year 2017 in exchange for job creation, has been generally applauded as a "step in the right direction" but is not expected to create employment anytime soon.

His State visit to the United States on February 11-13 (without former First Lady Valérie Trierweiler) will put the spotlight on him and give him an opportunity to polish France's somewhat dimmed luster - or at least help sell French goods.

President Hollande is not the only one under pressure. On February 5th, the Infanta Cristina, youngest daughter of King Juan Carlos of Spain and mother of four, appeared in court in Palma de Mallorca where in a closed-door meeting with Investigative Judge José Castro she was questioned for seven hours about her involvement in the corruption scandal surrounding her husband Iñaki Urdangarin. Former Olympic handball medalist Urdangarin, who received the title of Duke of Palma upon his marriage to Cristina in 1997, is accused of diverting €6 million from the Nóos Institute, a charitable foundation he managed, to a private company he co-owned with his wife Cristina. Part of the money was spent on lavish parties and on renovating the couple's private villa in Barcelona. Cristina, who sat on the board of Nóos, claims that she never suspected the source of the money she spent and implicitly trusted her husband.

The princess and her husband have not been charged with a crime but are officially listed as suspects. Judge Castro is expected to decide in the coming weeks whether he will call for a trial.

This corruption scandal has further weakened the Spanish monarchy, after the public outcry in April 2012 when King Juan Carlos went on an expensive elephant-hunting safari in Botswana while his country was mired in an economic crisis. Further allegations of an affair with a glamorous German divorcee, as well as his diminished physical condition following five operations in 18 months, have fueled demands for the 76-year-old king's abdication in favor of his heir, 46-year-old crown prince Felipe. There also is a growing movement of Republicans who would like to see the monarchy abolished altogether.

In several villages of the Nord Pas de Calais region of France, a rash of thefts of hydrangeas (called hortensias here) from private gardens has been noted in recent weeks. It now appears that dried hydrangea flowers mixed with tobacco can be smoked like marijuana, with similar hallucinogenic effects. There is little or no scientific evidence available, but Kurt Hostettmann, honorary professor of pharmacology at the University of Lausanne and Geneva, says that when smoked, hydrangea flowers can have euphoria-inducing effects similar to those caused by THC (tetrahydrocannabinol), a psychoactive substance found in the cannabis plant. He warns, however, that regular users risk poisoning themselves. "The secondary effects are very dangerous to the health", he says, causing stomach and respiratory problems and, when used in large amounts, can produce prussic acid, the base of Zyklon B gas used in the Nazi death chambers. 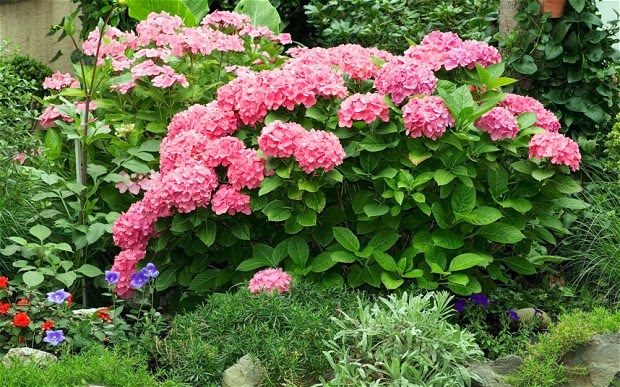 The hydrangea flower as a cheap substitute for marijuana seems to have originated in 2013 in Bavaria where hydrangea plants kept consistently disappearing from public gardens, until police caught the culprits.

As French gendarmes have vowed to catch their own Hortensia Gang, villagers in Nord Pas de Calais have begun moving their plants closer to the house and with the help of the old-time vigilante network of a French village, stand ready to do battle with the invaders.

Posted by Anne-Marie Simons at 5:43 AM