ROCKY RENTREE
It's been a rocky Rentrée for the government so far. Prime Minister Valls and the new Cabinet he formed in late August had barely begun working when newly appointed Trade Minister Thomas Thévenoud was forced to resign after only nine days on the job. It was revealed that for four years in a row he had "forgotten" to pay his taxes, and that during three years he did not pay the rent on his Paris apartment until he was threatened with expulsion. He then paid the back rent plus penalty just before his nomination to Parliament. As he explained to the weekly Le Canard Enchainé: "I have an aversion to paperwork". It appears that his wife was similarly afflicted: a week after her husband, she was relieved of her job as chef de cabinet of the President of the Senate. Icarus revisited.

This matter recalls the "Cahuzac Affair" of March 2013, when then-Budget Minister Jerôme Cahuzac had to resign over an undeclared bank account in Switzerland (blog 4/14/2013). A year later, Ecology Minister Cécile Duflot resigned in protest over Hollande's centrist policies, and lackluster Prime Minister Jean-Marc Ayrault was replaced by Manuel Valls who was more popular. In August of this year two disloyal ministers, Montebourg and Hamon, were fired for their open criticism of the president, and were followed by Minister of Culture Aurélie Filippetti, who resigned in sympathy with their protest. A lot of coming and going in a government that still has not found its footing and remains tentative and indecisive.

A pattern has emerged: as soon as a cutback is announced, it is followed by a protest which is followed by the cancellation or reduction of the cutback. Result: loss of credibility.

Halfway through his first five-year term, the president's standing in the polls has now reached a dismal 13 percent, the lowest ranking ever for a French president. He has lost the support of the left wing of his own Socialist party which has spawned a block of dissenters that threatens to change the balance of power in the Parliament during a Vote of Confidence there this week. Depending on the outcome, the ruling party may lose its narrow majority, in which case the specter of a referendum, new elections and co-habitation with the center-right UMP opposition party looms large.

TRIERWEILER BACK WITH A VENGEANCE 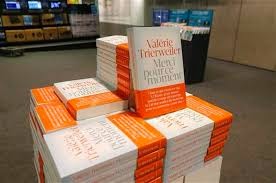 In the midst of all these problems, Valérie Trierweiler, former "first lady" and live-in partner of President Hollande for the past nine years who was brutally dumped in January, has come out with a score-settling book entitled Merci Pour Ce Moment - her answer to the curt 18-word statement that François Hollande personally telephoned to AFP, announcing that he had ended his relationship with Ms. Trierweiler (blog 1/30/2014). The book depicts Hollande as a cold and calculating man whose focus in life has always been his own political advancement and who lost his humanity once he reached the presidency. He was disparaging about Valérie's humble background and called her family "no fun". Other, pettier, revelations concern his love of fancy restaurants and luxury hotels. But what really hurt Hollande was the statement that he, an avowed socialist, "does not like the poor and refers to them as the toothless ones". In what sounds like an overreaction, Hollande called this a lie and "a blow to my entire life". In Le Nouvel Observateur of 11 September he talks at length about his total devotion to the poor, from his high-school days on throughout his years of higher education and his entire political career. "I have always served the poor", he assures, and goes so far as to call the poor his raison d'être. As a socialist who has publicly stated that he dislikes the rich and who during his presidential campaign against "bling-bling" Nicolas Sarkozy pointed out that Sarkozy wears a Rolex watch ("I wear a Swatch"), not liking the poor does sound like treason. 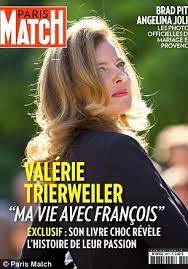 No comment from Hollande about the matter of his ungentlemanly "dismissal" of Trierweiler, his alleged attempts over the next few months to win her back with bouquets of red roses, dinner invitations, and a stream of text messages ("one day he left me as many as 29 messages"), or his secret nighttime visits - helmeted and on a scooter - to new lover Julie Gayet, which had people tittering for weeks. He may have dismissed this as petty gossip, but being called a bad socialist really went too far.

Trierweiler never recovered from the backlash to her jealous Twitter outburst against Ségolène Royal, Hollande's previous partner and mother of his four children, when in 2012 she supported Royal's opponent in a senate race. Public sympathy went to Royal and shifted back only slightly when Trierweiler was boorishly repudiated by Hollande in full view of the world.

The appearance of Merci Pour Ce Moment created a sensation: a first printing of 200,000 copies sold out in a matter of days and another 200,000 copies are currently being distributed. Public opinion about Trierweiler is divided, with some calling the book an act of revenge by a woman scorned, while others see it as a predictable response to the needlessly public humiliation she suffered at the hands of a selfish womanizer who cast her aside for a younger rival. Amazon has announced that Merci Pour Ce Moment has become an instant bestseller, topping "Forty Shades of Grey" as the most-sold book in France so far. The English version will be available in October.


In another Only-in-France moment, convicted trader Jerôme Kerviel, 37, who lost nearly €5 billion in risky derivative bets for his employer Société Générale in 2008, was warmly welcomed at the Communist Party-organized Fête de l'Humanité, an annual festival for French and international left-wing political groups held in a Paris suburb. Condemned to five years' imprisonment (two suspended) and released from prison only days ago with an electronic ankle bracelet and a night curfew, a happy Kerviel embraced Jean-Luc Mélenchon, founder and until recently co-president of the Left Party, and thanked him for his "unfailing support through my darkest moments". Mélenchon in turn compared Kerviel to Captain Alfred Dreyfus: "the innocent victim of a corrupt system - in this case the all-powerful world of finance that ultimately makes victims of all of us citizens and taxpayers". The unlikely bedfellows were cheered as they promised to fight together for more market regulation.

Société Générale denies that it knew of the risky trades but Kerviel maintains that his bosses were aware of his actions and gave their tacit approval, later making him the scapegoat for the bank. During his trial he received wide support from a variety of leftist organizations who saw the Kerviel case as a symbol of the wider failings of the financial system.

The three-day Fête de l'Humanité was founded in 1930 and has been held every year with the exception of the war years 1940-1944. It is a popular mix of left-wing politics and a festival of music, food and wine, and draws many thousands of participants.

STRIKES OF THE WEEK

After spending two weeks in the rather less excitable north of Europe, I came back to an agitated France where this week alone several strikes have been called:  Pilots for Air France-KLM kicked off a week-long strike starting on Monday 9/15, accusing the airline of shifting jobs and operations to their low-cost carrier Transavia to fight growing competition from popular budget carriers Easyjet and Ryan Air. 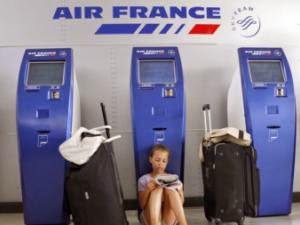 That same Monday, the French "Huissiers de justice" (bailiffs) went on strike, to be followed on Wednesday by the French "Notaires" (civil-law notaries) who plan to march in Paris against the proposed reforms of their "regulated" profession. The Huissiers announced that there would be no hearings and no process serving for a week, hoping to temporarily paralyze the French judicial system.
Of the several hundred recognized professions in France, the Finance Ministry is currently focusing on 37 "privileged" professions, i.e., those that are in a monopoly position and can set high fees. They include lawyers, notaires, commercial court clerks, bailiffs, certain health professionals, dental technicians, real estate agents, but also driving instructors.

The driving instructors will strike "for an unlimited time from 9/15 on" because they object to the government's proposed solution to reducing the long waits for a driving test by allowing certain gendarmes to assist in the testing. The waiting times in France are the longest in Europe, with an average of 98 days for re-taking the test after a first failure. A strike in June failed to produce results but caused 10,000 tests to be cancelled. This considerably worsened a situation which is said to be due to a lack of inspectors and too many regulations. The gendarme solution seems reasonable enough, but in France reason does not always prevail.

Paris Match magazine has just been sued for invasion of privacy by Arnaud Montebourg and Aurélie Filippetti, former ministers of Economy and Culture, respectively. The September 11 cover of the magazine features the couple taking a "selfie" during a private visit to San Francisco, described as a romantic interlude in the California sun. Perhaps to forget the sudden loss of their ministerial jobs? As much as they loved and needed the press in their work, they clearly love it less now that they are free.


As I hold my breath for the outcome of this week's Vote of Confidence in the Parliament, I am not sure whether it is better for Prime Minister Manuel Valls to win by a slight margin only to face a large group of disenchanted socialists in his own camp who are not likely to help him implement the needed reforms, or that new elections be called which will result in a co-habitation with the center-right UMP opposition party that is even less likely to go along with President Hollande's course of action.

One thing seems certain: whatever the outcome, we are looking at a bumpy road ahead.