This year the Halloween fun in France was overshadowed by the bizarre phenomenon of "evil clowns". In recent street attacks, one man had his hand slashed by a knife-wielding clown, another person was beaten by a clown with an iron rod in a robbery attempt, in a Paris metro station a clown pursued a passenger with an axe, and clowns have jumped out of dark doorways to scare pedestrians, causing panic. In the southern city of Agde police arrested a group of youngsters in clown costumes, armed with knives, a baseball bat and a pistol. Following these incidents, anti-clown vigilante groups have sprung up across France, and the mayor of Vendargues, a small town near Montpellier, decided to ban clown costumes for a month starting on Halloween. Some of the clowns turned out to be teenagers who wanted to post a YouTube video of their prank but had no intention to harm. Even so, the Police Nationale has issued a formal warning that anyone in a clown costume carrying a weapon will be arrested.

Dominique Strauss-Kahn reappeared in the news when his Franco-Israeli business associate
Thierry Leyne, 49, committed suicide in Tel Aviv on October 23rd. In September 2013 Strauss-Kahn and Leyne jointly formed a Luxembourg-based finance firm named LSK & Partners, to be run by Leyne as President. Strauss-Kahn, who bought a 20% stake in the firm, took on the chairmanship. Under Leyne's management, the firm ran into financial difficulties and Leyne started borrowing heavily, something Strauss-Kahn became aware of in early October of this year. On October 20th, DSK resigned from the firm and three days later, Leyne jumped to his death from a Tel Aviv skyscraper.

In an interview with Le Parisien DSK expressed his sorrow at the human tragedy behind Leyne's death (Leyne's wife had committed suicide in 2011) and admitted that he left the partnership in disagreement over some of Leyne's business decisions. He is likely to lose his entire investment, which he says is "a lot of money." He will now re-focus his full attention on his private consulting firm, Paris-based Parnassus, which specializes in economic advice to governments.

This financial setback comes at a time when DSK is still facing another trial in Lille in February on charges of "aggravated pimping".

Former Economics Minister Arnaud Montebourg announced in an interview on October 7th that he is leaving professional politics in order to go into private business. He has enrolled in a four-week Advanced Management Programme at INSEAD, a prestigious business school in Fontainebleau. The cost of this high-level management course is €34,500 and he is said to have applied for a scholarship. 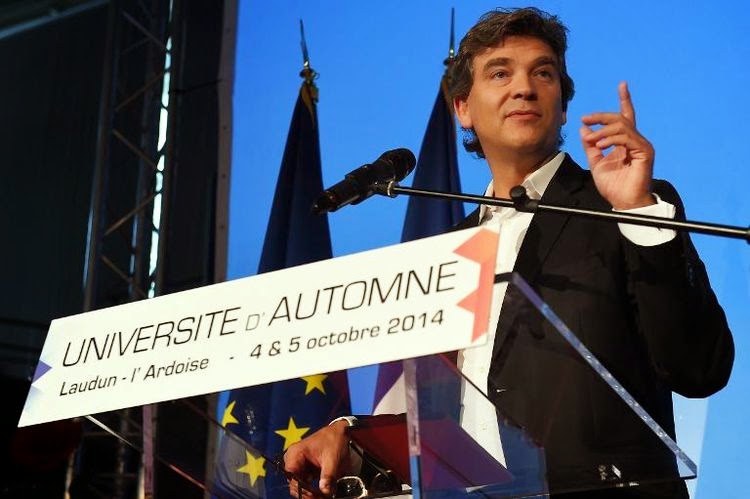 Having worked for the current socialist government first as Minister of Productive Reconstruction and subsequently as Economics Minister, Montebourg was fired by President Hollande in late August after he publicly voiced severe criticism of Hollande's economic policies (blog 8/27/14). Friend of the trade unions, Montebourg is known for his anti-globalization stance, his protectionism of French industry, and his confrontational style.

In preparation of the English-language INSEAD course, Montebourg is taking two hours of English every day before the start of his management program in November, after which he plans to start his own business, together with a few associates, in the field of medical imaging. "In the past two years I have come to realize that running a business is a real profession," he said of his new calling. But then our newly converted businessman lets it slip that he may yet run for the presidency in 2017.  "We'll see in 2016." He never stops surprising us.

Every year in October Aix-en-Provence invites a major writer to its Fête du Livre and this year our guest of honor was Mario Vargas Llosa who won the Nobel Prize for Literature in 2010. He was the tenth Nobel Laureate to come to Aix (the first was Octavio Paz) which has also hosted such greats as Philip Roth, Salman Rushdie, Alberto Moravia, Michael Ondaatje, Carlos Fuentes, Antonio Tabucchi and dozens of others.

We have one person to thank for all of this:  Annie Terrier, the founder and driving force behind this exceptional three-day literary event, who 30 years ago created the program "Ecritures Croisées" − for the introduction and cross-pollination of foreign literature in France − of which La Fête du Livre is the annual highlight. With a limited budget and an even smaller staff, she has managed to draw literary giants from all over the world to the small town of Aix-en-Provence. Now 71 years old, Terrier has no plans to retire which, in this land of early retirement, makes her a true exception française.

At this time of the year France awards its literary prizes, of which the Prix Goncourt is the most important one among the "big six" that also include the Prix Renaudot, the Prix Femina, the Prix Médicis, the Prix Interallié, and the Grand Prix du Roman de l'Académie Française. Tradition has it that the winner of the Prix Goncourt, first awarded in 1903, is announced at a lunch at restaurant Drouant near the Opéra Garnier where its 10-member jury has been meeting once a month since 1914. Marcel Proust, Simone de Beauvoir, Marguerite Duras, Romain Gary and André Malraux are among its winners. The Goncourt awards only a token €10 because of its tremendous effect on sales which makes a Goncourt winner an instant millionaire. Those readers in France who only buy one book per year will always choose the Goncourt.

This year's winner was former psychiatrist Lydie Salvayre for her novel Pas Pleurer (Don't Cry) which is partly based on her mother's experiences in the Spanish Civil War. Salvayre was born in 1948 near Toulouse where her parents, Republican Spanish refugees, had settled at the end of the Spanish Civil War and where she learned to speak French in elementary school. She published her first book in 1990 while working as a practicing child psychiatrist which she continued to do for many years. She has published 21 books, some of them adapted for the theatre.

The well-known English-language Man-Booker Prize for Fiction was awarded this year to Australian Richard Flanagan for his novel The Narrow Road to the Deep North, about a Japanese POW camp on the infamous Burma Railroad of which Flanagan's father was a survivor.

Last month, the Nobel Prize for Literature was awarded to Frenchman Patrick Modiano, and shortly thereafter a second Nobel prize, this one for Economics, went to another Frenchman, economist Jean Tirole, 61, professor at the Toulouse School of Economics. The Nobel Committee rewarded Tirole for his "attempts to tame powerful firms" and finding ways to curb the dominance of major companies, often privatized former public monopolies such as water, electricity, and telecoms. His work has been adopted by competition regulators around the world.

These Nobel prizes may help to boost national pride and pierce the dark cloud of pessimism hanging over France. At least for a while.

Posted by Anne-Marie Simons at 5:32 AM