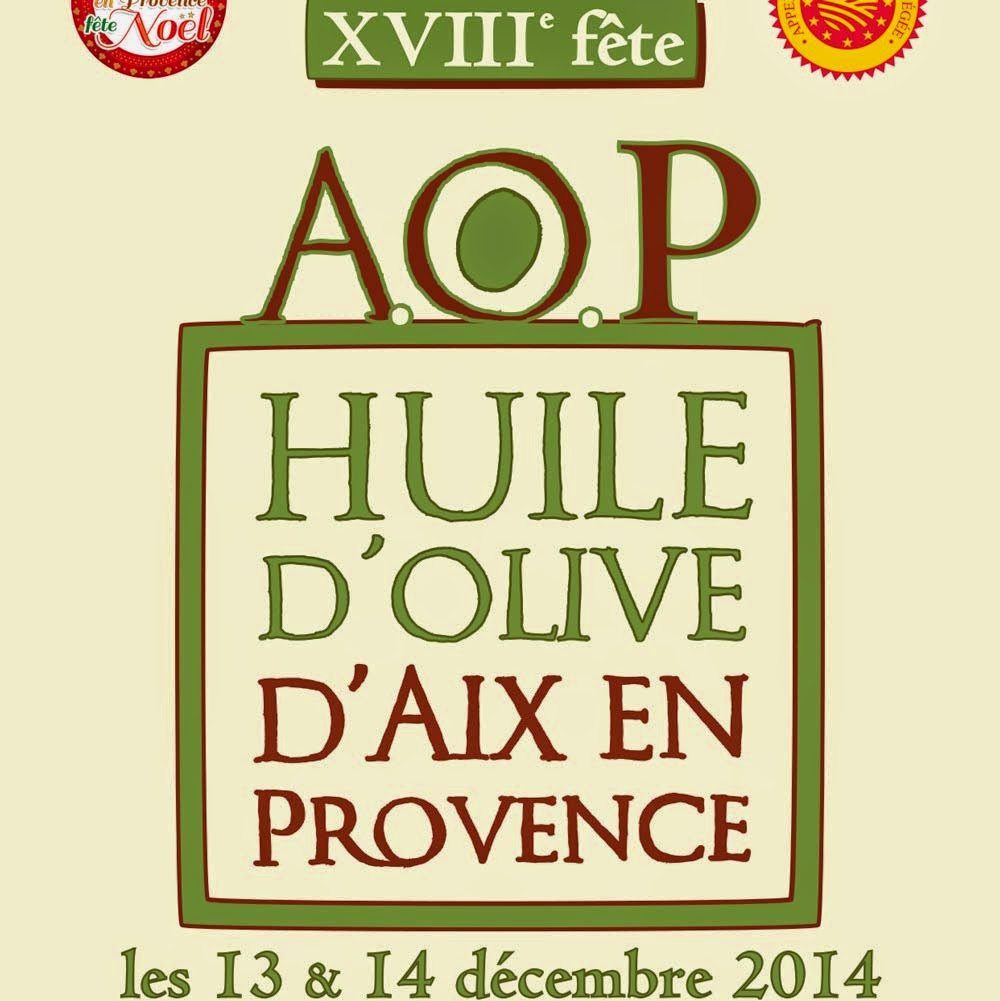 This weekend's Olive Festival in Aix, when the area's olive mill owners introduce their new millésime AOP (Appellation d'Origine Protégée), was decidedly less festive than in previous years. The reason was simple:  excessive late rains and an infestation by the feared olive fly, a parasite that bores into the olive and makes it fall off the tree prematurely, have decimated the olive oil production this year. Between 70 and 80 percent of olives were infested and unfit for consumption, and the small quantity of available oil was sold in smaller containers and sometimes even rationed among customers of this annual fair. Very few 5-liter containers (we buy three of those) were to be found, and for the first time ever we had to spread our 15-liter purchase over three different producers.

Under pressure from the European Commission in Brussels to reduce its deficit, the French government has begun selling stakes in public assets in hopes of raising €4 billion in the next two years. Last week, it sold 49.9 percent of Toulouse-Blagnac Airport to a Chinese consortium for €308 million. Discussions are underway to reach similar deals for the airports of Nice and Lyons.

The airport sale to China has raised some security concerns, especially since aeronautical giant Airbus Group is located at Toulouse Airport. Earlier this year, China bought 14% of French carmaker Peugeot.
To avoid EU sanctions for not having effected enough reforms this year, France's Economy Minister Emmanuel Macron last week proposed a "basket" of new laws to stimulate the economy and create employment. It contained, among others, a bill to open up certain regulated professions to competition, and another one to allow shops to open 12 Sundays per year instead of the current five. The latter proposal, to be discussed in Parliament in January 2015, ran into immediate opposition from Martine Aubrey, former Leader of the Socialist Party, who called it a "regression" and vowed to vote against the new law. Prime Minister Manuel Valls's response that "everything is open for discussion" indicates that even this timid effort at removing some business restrictions will probably be watered down. Macron, who has often criticized the 35-hour workweek, did not include this hot potato in his basket.

Finally, credit rating agency Fitch has just downgraded France's rating from AA+ to AA, judging that the government's efforts to cut its deficit are not good enough. Last October, Standard & Poor had similarly downgraded France's credit, quoting the poor outlook for the country's economy in the next two years. 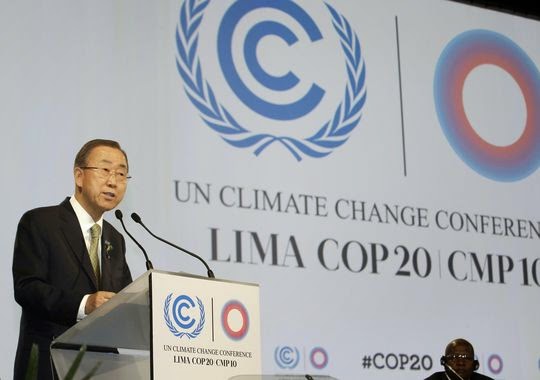 The next Climate Summit will be held in Paris in December 2015. In view of the meager results obtained at the UN Climate Conference in Lima earlier this month, which left most contentious issues unresolved, much work remains to be done to pave the way to successful negotiations and a potential global climate deal in Paris next year. And the French government would be setting a bad example if it did not make a serious effort to reduce its air pollution on home ground, particularly in Paris and Ile de France, where dangerously high levels of fine-particle air pollution were recorded several times this year (blog 3/17/14).


As a first significant anti-pollution response, Paris Mayor Anne Hidalgo declared last week that diesel-engine cars, known to be the worst polluters, would no longer be allowed in Paris from 2020 on. She plans to promote and increase public (clean) transportation, create more pedestrian-only areas in the center, increase the number of city-owned rental bicycles and double the dedicated cycling lanes, reduce the speed limit within the city to 30 km/hr, and ban diesel-driven delivery trucks from the city as early as 2017. It is an ambitious program that will no doubt face many obstacles, but then - what is easy in France?

Remember the regrettable decision by Ecology Minister Ségolène Royal who last summer decided to do away with the Ecotax (blog 6/30/14), an anti-pollution tax levied on heavy trucks traversing France? This tax was meant to finance eco-friendly means of transportation (rail and river transport, extended metro and tram lines, a new fleet of "clean" buses). Ms. Royal decided that the loss of Ecotax revenues could be (partly) offset by new taxes to be levied on the highway companies that are getting "unduly rich" on toll revenues. Notably absent from this reasoning is the issue of air pollution.

If you were baffled by the elimination of the Ecotax, as I was, Ms. Royal has surprised us again when she declared a week ago that she would invalidate the recent prefectorial decision to outlaw wood-burning open fireplaces in greater Paris from January 2015 on. She found the measure "excessive" and called it "punitive ecology". According to environmental experts, open fireplaces release as many toxic fine particles into the ambient air (23%) as car exhausts. Ms. Royal disputes this figure but wishes to promote the use of wood ("France's surface consists for 30 percent of forest") as an excellent heating fuel, especially when it is burned in an energy-efficient closed space such as a stove or a fireplace insert. If wood-burning fireplaces are not the principal source of heating but serve only a recreational purpose, she sees no reason to outlaw them. And her wood-as-fuel argument seems a valid one. Yet, undoing a prefectorial decision based on public health considerations just weeks before it was to go into effect seems rather dictatorial and calls into question her tolerance of avoidable pollution, however minor, especially as Minister of the Environment. It is after all those very same fine particles that have repeatedly exceeded the established safety levels this year and caused serious problems. 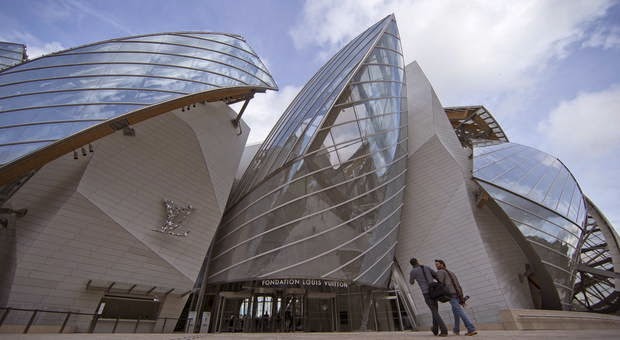 I recently visited the Frank Gehry-designed Louis Vuitton Foundation museum in the Bois de Boulogne in Paris, which was officially opened on October 28th with a concert by pianist Lang-Lang in its auditorium. The stunning building, shaped like a boat with billowing glass sails, houses the private contemporary art collection of Bernard Arnault, France's richest man and owner of the luxury conglomerate LVMH. The twelve giant sails, reflected in an adjacent pool, are made of a new purpose-built glass invented and fabricated by St. Gobain Group in France. They cover and interconnect four levels of indoor galleries and outdoor terraces, and give an air of floating lightness to the large structure. Although equipped with the latest technical advances, I noted with some glee that the main elevator was out of order at the time of my visit. Perhaps just to keep us grounded amidst all this space-age technology. 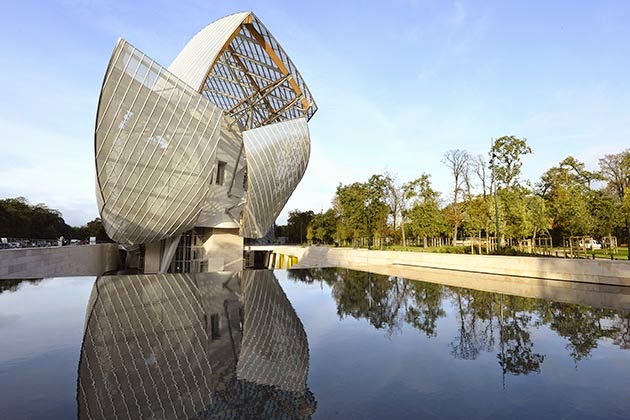 The art displayed inside is completely overshadowed by the building. In fact, the building IS the work of art and in its strange diversity of shape and form must be toured inside and out. Its setting on the edge of the Jardin d'Acclimatation allows for a walk around the entire site and a near-transparent view from many an angle, even seated from one of the park's benches. Expect a Vaut le Détour listing in the next Paris tourist guide.

Last Saturday, Valérie Trierweiler came to Aix-en-Provence to sign her book Merci pour ce Moment, the account of her relationship with President François Hollande. Published in early September, the book has been widely criticized and the author vilified for washing her dirty laundry in public. In France, a philandering husband (or partner) is nothing exceptional and often accepted as a fact of life. Take it or leave it. Had the break-up not been so public it would have been greeted with a yawn. But it was, and the whole world shared in it. Today, it appears that the fascination continues, judging by the huge crowd of buyers, book in hand, lined up at the bookstore where VT was appearing. Some in the (mostly female) crowd carried several copies; Christmas gifts no doubt.

Even the local press got excited and the next day published a huge photo of VT on the front page of the newspaper La Provence, and a half-page article on page 2 with another large photo of the author. One woman waiting to have the book signed was quoted as saying: "This is for all the betrayed women". Perhaps that explains its success? To date, 700,000 copies have been sold.

And suddenly, Christmas is upon us. A large Crèche peopled with Santons has been installed on the Cours Mirabeau, famous chefs are preparing Christmas dinners on television, the rush is on for foie gras, truffles and champagne, and I better get my own house in order and get busy.


But not before wishing you happy holidays with my glittering Christmas car(d).
May your bulbs never dim and burn bright forever! 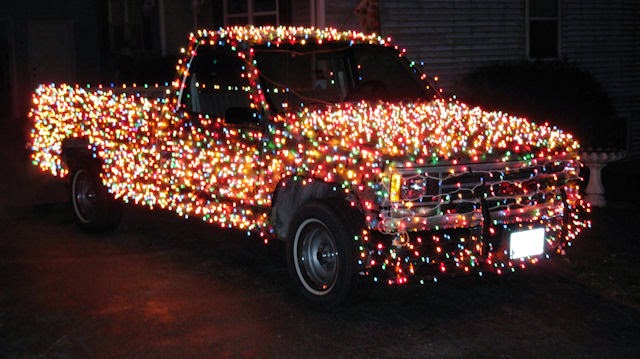 Posted by Anne-Marie Simons at 1:18 AM