PROBLEMS AT THE PORK FARM

The summer of 2015 has been a hot one, with temperatures rarely dipping below 30-C and often reaching 37 or 38-C, which is uncommonly high in Provence. The usually quiet month of August (government on holiday) was further heated up by a crisis in the pork industry that has resulted in truckloads of manure being dumped in front of government buildings, access to certain supermarkets and tourist sites (Mont St. Michel) being blocked, and major roads from Germany and Spain being barricaded to stop agricultural products from coming in. The cause of this upheaval is the price of pork, set twice a week by the Breton Pork Market in Plérin, which pig farmers claim is too low to cover their production costs. 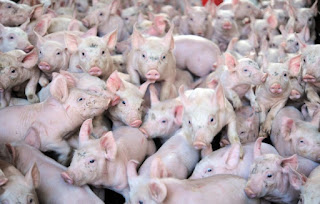 Some external reasons for this are the EU economic sanctions on Russia over Ukraine, effectively closing down a huge export market of EU meat, as well as slowing Chinese demand. The resulting excess of pork products has flooded European markets at depressed prices. But other reasons are to be found in France and its family farms that are too small to compete with the larger, heavily mechanized farms in Germany and Spain. Says one farmer: "We pay higher social charges than our European competitors and are burdened by an accumulation of environmental and other regulations in France, including a government-set maximum size of our farms. How can we compete?"

The support system of price controls, EU subsidies and state aid that has underpinned French agriculture for decades is now unraveling, and it is generally agreed that France needs to reform its agriculture in depth. This includes the entire breeding sector, from pork to beef to milk producers, whose size and traditional methods make them uncompetitive. 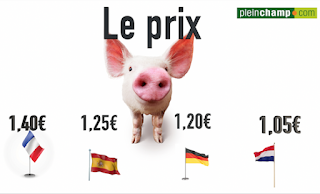 France accounts for more than ten percent of EU pork production, most of it in Brittany. In the past, the industrial meat purchasers have occasionally bought up overproduction at set prices to absorb the excess, but this time two of the biggest French pork buyers were unwilling to participate, boycotting the Plérin exchange and shutting it down for eight days. They refused to pay the farmers' price of €1.40 per kilo below which, the farmers say, they cannot make ends meet. Today, one quarter of all French pig farmers are on the brink of bankruptcy.

All eyes are now on Stéphane le Foll, French Minister of Agriculture, who has called a roundtable of all players and offered the farmers an emergency package of €600 million in tax relief and government-backed loans but failed to address the foreign competition issue. Like most French farmers who blame Europe for overproducing and selling at cheap prices which they cannot match, Le Foll agrees that the solution lies in harmonizing prices among European states. "If we could find a price compatible with the German, Spanish and British systems, we could talk" he said at a news conference last week. He will meet his counterparts from other European farming nations in Brussels on September 7th, where he will try to obtain guarantees. However, according to Catherine Laillé who runs a pig farm in the Loire Atlantique region, the government should act on the French social welfare charges and regulations which need to be brought in line with those of other EU farming nations. Failing that, she says, the French breeding sector is bound to die out.

French public opinion is squarely on the side of the farmers. The French love their farm-raised products, which they buy at daily outdoor markets, convinced that fresh small-farm produce is superior to supermarket produce. They are willing to pay more for organic food, a growing sector, and would probably be willing to pay more for French pork to save the breeders, but supermarkets and distributors object to a rather significant price difference between French and less expensive imported pork. For the consumer, saving the French family farm is an emotional issue, for the free market an economic one. We all know, of course, which side will win.

Speaking of pork, the question of whether or not pork should be offered at public school cafeterias has made front-page news this month. For years, public schools have been offering a standard lunch menu as well as one without pork for those with religious objections. But in March of this year, Mayor Gilles Patret of Chablon-sur-Saône announced that he was against religion-based substitute menus in public schools and would ban them in his community come September. Pork has been served once a week as part of the standard school menu, and on those days a substitute menu was available to Muslim or Jewish students. Patret's decision was denounced by his Muslim constituents and by some Muslim leaders, and ended up being challenged in court. But on August 13th a judge in Dijon ruled in favor of Mayor Patret, accepting his argument that vegetarian menus are available every day and that nobody is obliged to eat pork. Citing the cost of substitute menus and the principle of laicité in public schools, Patret suggested that Muslim parents (he does not have Jewish constituents) pack a sandwich on pork days, but that no secular school should be expected to observe religious restrictions of one kind or another. 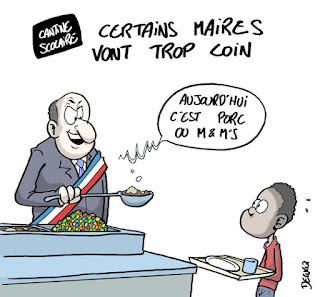 The 1905 French law on separation of church and state has at times been used to political advantage, and some ten years ago served to ban the wearing of Muslim headscarves, Jewish skull caps, crosses or other "ostentatious" displays of religion inside French public schools. France has both the largest Jewish and Muslim populations in Europe, and tensions in the Middle East are often replayed between the two communities. Not surprisingly, the incident in Chalon-sur-Saône was seized on by the extreme-right Islamophobic Front National Party of Marine Le Pen who declared she would immediately ban the pork-less substitute meals in the eleven communities her Party controls.

Public opinion is largely divided along political lines, with conservatives supporting the court's decision, but Abdallah Zekri, speaking for the Council for the Muslim Faith, called the decision regrettable and "not taken to bring social peace to schools". No comment from the French pork farmers who must be quietly jubilating.

Every summer the City of Paris offers local vacationers a very popular month-long event, Paris Plages: more than three kilometers of sandy beaches on the banks of the Seine with deck chairs, parasols, palm trees and food stands, and some water-sports events at the La Villette Basin. This year, however, the holiday atmosphere was clouded by Paris Mayor Anne Hidalgo's decision to celebrate the city of Tel-Aviv on August 13th with one-day festivities of Jewish music and foods as part of Paris Plages. The announcement was met with outrage from pro-Palestinian quarters who responded with their own Gaza Plage on the other side of the Notre Dame bridge, facing Tel-Aviv sur Seine.

Trying to calm the waters, Hidalgo explained: "The idea was born on a diplomatic mission of the Paris City Council to Israel and Palestine last May to feature Tel-Aviv this year just as we have in the past invited Athens and various beach-front cities of Brazil and Polynesia". She called Tel-Aviv a progressive city that is known for its opposition to the hardliners in their government and said that France entertains a lively exchange of culture and new technologies with the city. 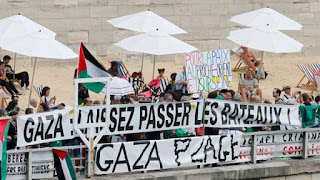 Nevertheless, the pro-Palestinians found it unacceptable to honor a country responsible for the killing of four children on a Gaza beach last summer and more recently the fire-bombing of a house in Gaza that killed a young father and his baby boy. "Would you have organized a Berlin Beach in 1944?" one protester cried. Answering the call of the Europalestine Association, some one hundred protesters gathered to wave a Palestinian flag, hand out free falafels and carry "Boycott Israel" signs.

On the opposite bank a festive mood reigned as people danced with an Israeli flag and chanted to Jewish music, offering typical pastries and generally ignoring the disturbance as much as they could. Some, however, spoke of a sense of apartheid and expressed their disappointment at the reconstitution of the Israeli-Palestine conflict in this relaxed and happy beach setting in Paris.


Despite the tension in the air, the day ended without major incident, in large part due to preventive security measures (metal detectors and a bag check at the entrance to Tel-Aviv sur Seine) and a police force of 500 who managed to keep the two opposing camps separated and nipped flare-ups in the bud.

Free-market pricing, pork on public school menus, even Paris Plages − in the end All is Politics, as Thomas Mann would say.

The talk of the day in France is about the courageous Americans who forestalled a terrorist attack on a passenger train from Amsterdam to Paris last Friday. It so happened that in the last car of the Thalys high-speed train three Americans (two off-duty military personnel and one university student who were childhood friends) were traveling together when they noticed a young man with a heavy bag on his way to the toilet. Next, their trained ears picked up the sound of a magazine being loaded into a machine gun and almost simultaneously a shot being fired at a French passenger who tried to stop the gunman as he came out of the toilet with a Kalashnikov rifle. "Let's get him" one of the Americans yelled as they ran up to jump the gunman, led by Spencer Stone (6 ft. 4") who got there first and tried to wrestle the gun away. In the struggle a shot went off, slightly wounding a passenger, and Stone was slashed in the neck and hand with a box cutter knife. The three managed to overpower the gunman ("we beat him unconscious") and, helped by a British passenger who came to their aid, tied him up and grabbed the weapons: a machine gun with nine magazines, a handgun and a box cutter.
As the train rolled into the station of Arras where police took the attacker into custody, the train carriage (the last one on the train, a perfect trap) revealed a movie-like scene of dazed passengers and several bloodied victims: the wounded Frenchman, Spencer Stone with knife wounds to his neck and hand, one passenger with a superficial head wound from a glancing bullet, and another one with cuts to his hand sustained when he broke the window to pull the emergency brake. The Frenchman who was shot is recovering in a Lille hospital and is out of danger, Stone underwent an operation on his nearly severed thumb and was released two days later, and all others were treated for minor injuries. 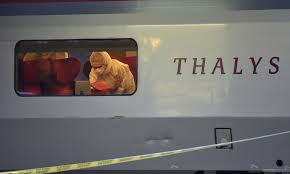 Bernard Cazeneuve, Minister of the Interior, who had rushed to the scene, later announced on television that an initial investigation has revealed that the suspect is 26-year-old Moroccan citizen Ayoud El-Khazzani who had lived in Spain and in France, and had been placed on a police watch list in 2014 for his radical Islamist views and suspected links to ISIS. He had boarded the train in Brussels, intent on committing a massacre. Cazeneuve expressed his gratitude to the Americans for their courageous act that without a doubt had foiled a terrorist attack. They were also praised by President Obama and will be received by President Hollande at the Elysée Palace on Monday.

To each of the fearless Americans I say, ATTABOY!!  And VIVE L'AMERIQUE! 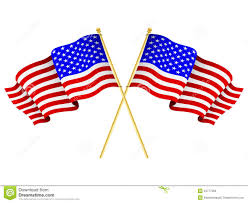