THE POWER OF A PICTURE

THE POWER OF A PICTURE 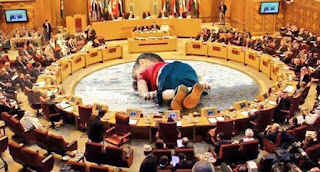 It's worth a thousand words, we know, but also capable of stirring people into long overdue action. For months now, we have been exposed to newspaper and television coverage of refugees fleeing their war-torn countries by crossing the Mediterranean on dangerously overloaded boats in an attempt to reach Europe. Many made it, some 2500 of them did not and drowned or suffocated − to widespread indifference or at least inaction in the West. Shocking as this indifference may seem, the refusal to help was usually motivated by economics, self-protection, or "religious" reasons (Hungary turning down Muslims). 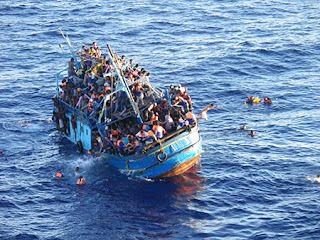 But then little Aylan Kurdi's body washed up on a Turkish beach and a photo of the 3-year old, face down in the sand like so much human flotsam washed by lapping waves, touched a nerve worldwide. Followed the story of his family's dramatic flight on an overcharged boat that capsized within sight of rescuers, causing Aylan's mother and 5-year old brother to drown in high seas and leaving his devastated father as sole family survivor.
Soon, the sight of the pitiful little body set the social media abuzz and managed to galvanize the political debate, creating the beginning of a solution for a fair distribution of refugees across reluctant EU countries.

J'ACCUSE! might be a response to this family drama, one among too many others. But whom do we accuse? The warring nations that leave its endangered populations no choice but to flee? The despicable human traffickers who not only profit from but often abandon their victims mid-way? The EU countries whose hard-hearted rulers close their doors to these desperate migrants? The oil-rich Gulf States for refusing to take in their uprooted Arab brothers? The refugees themselves for accepting a life-threatening voyage of uncertain outcome organized by criminals whose sole aim is personal profit? 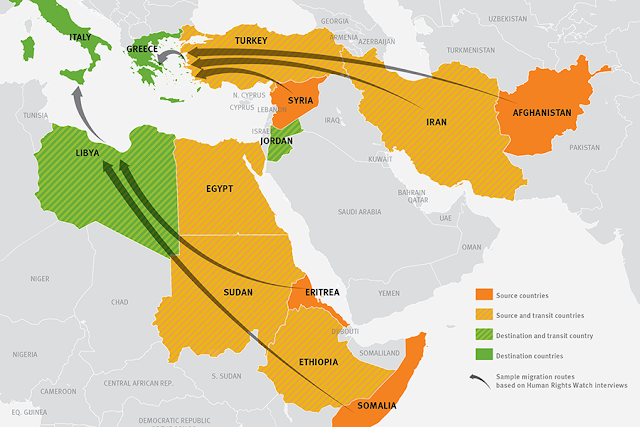 Of course we know that the root cause of this dramatic situation is to be found in the migrants' home countries and needs to be attacked there. But when the house is on fire and the flames are at your heels, you jump from the window no matter what floor you're on. Uncertain as their future may be, these migrants have reason to believe that staying put means death or a dismal future for their children. Who are we to question their motives? No-one, especially parents of small children, abandons home and hearth at great risk without compelling reason. 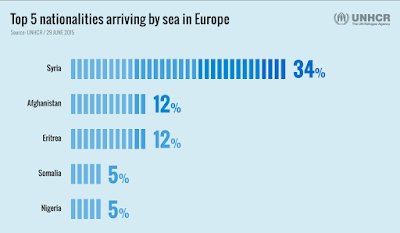 The present flood of Mediterranean migrants is not likely to diminish anytime soon and has already stretched available services in Italy and Greece beyond capacity. In response, the European Commission proposed a quota system for refugees based on the GDP, population and unemployment rate of each host country, but this was immediately rejected by Spain and France who claimed high unemployment levels within their borders. Germany then took the lead and increased its refugee quota for this year to 800,000, asking its EU partners to accept their fair share of asylum seekers (i.e., those fleeing wars) as well. The disappointing response was meeting after meeting of haggling politicians who could not find consensus, exposing again the European Union's fatal flaw:  its fragmented leadership and the persistent nationalism within its Union. Thus was the situation when a wave of solidarity and voters' demands unleashed by social media got the politicians' attention:  private homes and small-scale solutions were being offered and shame was being heaped upon our quarreling leaders. 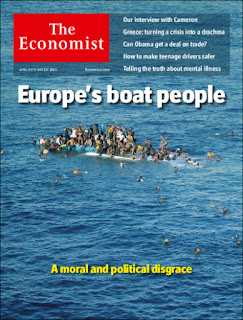 Suddenly, France's President Hollande found a way to offer asylum to 24,000 refugees over two years, dropping his prior policy to forcibly stop migrants from crossing the Italian border at Ventimiglia into France. And David Cameron, who had so vigorously opposed letting in the migrants stuck in Calais, offered to accept 20,000 of them over five years. All in front of TV cameras, of course, and obviously "for humanitarian reasons". What Angela Merkel had started to widespread popular approval had become an example to follow, whether the heart was in it or not.

We know that Germany has a declining population and needs immigrant labor; that is after all the reason why its offer can be so much higher than anybody else's. But we also know that the Syrian refugee population consists largely of educated middle-class people who had the money to pay passage, who speak English, want to work and many of whom want to return to Syria once it is safe to do so. This population should not scare anyone and can be expected to contribute positively to the various EU countries and identities. And let's not forget that these people did not choose to leave their countries and survived numerous hazards and hardships on their way to our borders. How can we NOT let them in?

France has been capable of great empathy and solidarity, as evidenced earlier this year in its unforgettable response to the Charlie Hebdo massacre in Paris. As one, the French locked arms and marched for freedom of speech and against religious fanaticism. It was spontaneous, massive and unifying. France is also the country of Human Rights and has provided a safe haven to Armenians and other persecuted groups who have since flourished here and made the social fabric undeniably richer. 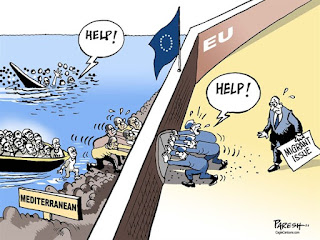 It would therefore seem obvious that it open its doors again to those who are fleeing war and violence today. But an iTele-Paris Match poll published last week shows that a majority (52 percent) of the French oppose their government's decision to welcome the refugees for fear that this will encourage future migration to France. The vote breaks down roughly along party lines: 73 percent of those polled on the left are in favor, 68 percent of the center-right are against (with its spokesman Xavier Bertrand calling the proposal of Prime Minister Manuel Valls "irresponsible"), and Marine Le Pen of the extreme-right Front National party is totally opposed to any immigration of any kind. The current political climate in France certainly plays a role in this situation, but so does the French inherent fear of change which is so easily manipulated by the extreme right.

France's motto of Liberté, Egalité and FRATERNITE is being put to the test. Will it hold up under the pressure at its borders?


In his bi-annual press conference on September 7th, President Hollande not only confirmed the acceptance of 24,000 asylum seekers over two years but also announced that, beginning immediately, French Rafale fighter planes will join coalition forces in the Middle East to provide reconnaissance flights over Syria in order to offer bombers the best possible intelligence for attacking Daesh-Islamic State sites. No troops on the ground, however, but a valuable tool nevertheless in trying to eliminate the growing threat of Daesh in the area and, no less important, thereby stemming the flow of refugees to Europe.

he Central European countries continue to insist on full control of who and how many of the refugees they let in, and Prime Minister Rasmussen of Denmark, elected only months ago on a platform of anti-immigration policies, has just closed the door to asylum seekers in his country and will only allow them to transit to Sweden where they are welcome. Despite Germany's moral leadership (Ô irony!), several EU members continue to oppose, mostly for selfish reasons, a fair distribution of refugees across Europe.

In his annual State of the Union address on September 9th, an angry Jean-Claude Juncker, President of the European Commission, called the immigrant crisis "a matter of humanity and human dignity" and spoke of the duty for EU countries to accept refugees, bearing in mind that many of its own citizens are from refugee families. He pointed out that the current wave of Syrian asylum seekers represents only 0.11 percent of the total EU population whereas the refugees in Lebanon represent 25 percent of the population. If no agreement is reached soon, he threatened, he will impose a mandatory quota system. The EU interior ministers will be meeting in Brussels on September 14th to discuss the migrant crisis. This may be their last chance at agreeing to an equitable distribution of refugees before quotas may be enforced.

All it takes is political will and a humanitarian spirit. Remember E PLURIBUS UNUM.