Last month, Provence Today was mum since I spent the entire month of October in the United States, totally disconnected from France. It was a disconnect but, inevitably, also a time of comparison between two worlds that function very differently.


On the one hand, the mighty UNITED STATES, richest country in the world (give or take a couple of oil-rich dictatorships), where a terrorist attack wiped out the proud twin towers of New York's financial heart in 2001, and where today an air of defiance hangs over the new One World Trade Center tower, tallest in the western hemisphere, higher and more beautiful than its predecessors. Opened to the public more than a year ago, One WTC, together with its moving Memorial and Museum, will soon be surrounded by five high-rise office buildings (two are still under construction) on the new 16-acre WTC site that fairly throbs with energy and vigor in that uniquely American can-do way.
Would this be possible in Europe? I wondered.

Or this:  American television programs are all interrupted by advertising. These commercials are a nuisance but something one gets used to. What struck me this time, however, was the incessant advertising of drugs and medical treatments, even in the printed press. "Ask your doctor," many of them say, which I suspect few people do given the expense of medical care in the US, a good part of which is no doubt caused by the vast amounts spent on pharmaceutical advertising.

Or this:  The televised presidential debates preceding next year's elections showed the usual verbal skirmishing and grandstanding − only more so on the part of Donald Trump − about a wide range of issues among which the two constants:  God and guns. Yes, God and guns, which no American presidential candidate can sidestep or ignore.

Two very different societies, each with their strengths and weaknesses and their mutually incomprehensible issues:
"Why can't America get a grip on its guns? Even if the Constitution grants this right, why do people feel the NEED, especially for assault weapons that don't serve for self defense?"
"Why is everything so COMPLICATED in France where unemployment remains high? Why can't people work on Sundays if they and their employers WANT to? And why does this lay country still celebrate half a dozen saints' days with official holidays?"

No short answers to any of this, so let's move on. 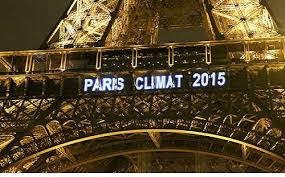 On to France, that is, and to what's happening there this month, which is essentially the preparation of the United Nations Conference on Climate Change to be held in Paris from November 30 to December 11. Named COP 21 (for 21st COnference of the Parties to the 1992 UN Framework Convention on Climate Change), this conference aims to reach a binding international agreement to keep global warming caused by greenhouse gas emissions below 2°C. COP 21 is preceded by a final preparatory meeting in Paris on November 8-9-10, attended by 62 Interior Ministers from participating nations and presided by Laurent Fabius, French Minister of Foreign Affairs. The purpose of this pre-COP 21 meeting is to identify areas of compromise on four critical issues that are holding up a global deal, so that these can then to be taken to the COP 21 at the end of this month in hopes of speeding up a resolution. 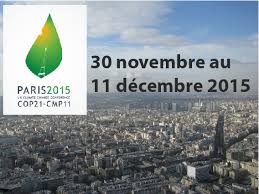 Organizers expect at least 40,000 people from 175 countries for the climate conference, as well as tens of thousands of activists from environmental and human rights groups. A major protest march in Paris is also planned. In this context, Interior Minister Bernard Cazeneuve announced last week that France will reinstate border controls in the Schengen area for a duration of one month around this event. This is a temporary measure taken in view of terrorist threats and a risk of disturbances to public order, he said.

While focusing on the security issues surrounding the upcoming COP 21 meeting in Paris, Bernard Cazeneuve is nevertheless not allowed to forget about the serious difficulties in the port city of Calais, where overnight clashes between migrants and police have broken out in the over-populated Jungle, the temporary tent city where those who want to try to get into England are "housed" in shamefully inadequate conditions. Calais is located at the mouth of the Eurotunnel through which the migrants try to reach England as stowaways on trucks or trains, or even on foot. Many want to go to England because of the language or because they have relatives there; others want to ask for asylum or, as illegal workers, disappear into the black economy. 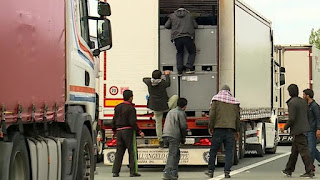 The recent wave of war refugees fleeing conflicts in the Middle East has overwhelmed reception centers in Greece and Italy and caused hostilities at a number of border crossings in Europe. The number of refugees backed up in Calais on their way to England has grown from 3,500 to 6,000, far more than the city can handle. At the request of England, France instituted tough new security measures this summer, such as 15 ft. high razor-topped fences and increased police patrols, to help prevent migrants from entering the UK. As a result, migrants' attempts to cross the Channel have dropped from a high of 2000 in July to 150 in August. 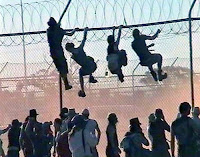 The onset of winter, the lack of running water and the unhygienic conditions at the Jungle, as well as the growing frustration among migrants over their inability to get to England, are now leading to unrest that is further being exacerbated by political activists from Britain who incite the migrants to riot. Police were called in when migrants had begun placing obstacles on a nearby road leading to the Ferry Port in order to stop trucks so as to jump on board. 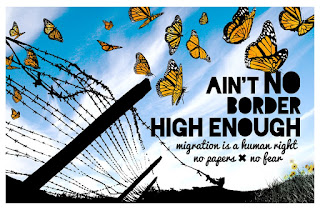 According to Pierre-Henri Brandet, spokesman for the Interior Ministry, it is the quasi-anarchistic No Borders organization that takes advantage of the migrants' disarray to push them into rioting and supplies them with iron bars and rocks to throw at police. In the recent clashes 27 police officers suffered minor injuries and the situation remains extremely volatile.

It is to be hoped that both the security at the COP 21 in Paris and at the Jungle in Calais can be assured in the coming weeks, and that subsequently a serious international effort will be made to find a solution to both pressing problems.