Yesterday, one hour before its official opening, President François Hollande visited the Salon de l'Agriculture in Paris, where all farm-produced riches of France − live as well as transformed − will be on display for nine days on the vast grounds of this annual fair at the Porte de Versailles. Just returned from a visit to South America and to French Polynesia, where he was wreathed in flower garlands, he found quite a different reception at the Salon where his arrival was booed amid cries for his resignation. The angry farmers, who have been marching and disrupting traffic everywhere for over a month, claim that Hollande has not kept his promises and that they are hanging on by their fingernails, facing bankruptcy if immediate relief is not forthcoming. Worst off are the dairy farmers and pork producers who cannot compete with lower-priced products from Germany or Eastern Europe sold at French supermarkets.

Last summer Minister of Agriculture Stéphane Le Foll acknowledged that French farmers pay more social charges and face stiffer environmental regulations than other European farmers who can offer their products at lower prices (see blog 8/23/15).  He promised to take up the issue with the European Commission in Brussels and to request that supermarkets show solidarity by reducing their profit margins on certain French farm products. In January of this year the government granted the farmers a 10 percent reduction of their charges but it was not enough and the demonstrations continued. At yesterday's Salon opening a beleaguered President Hollande said that negotiations with the supermarket chains are continuing and that he would discuss the problems caused by the EU's sanctions on Russia (big export market for French farmers) with the European Council at their meeting of March 7th. For the farmers it was a song and dance they had heard before, and they responded by tearing down the Salon's stand of the Ministry of Agriculture.

The small family farm, so beloved by the tradition-bound French, is facing an uphill battle against mechanized, industrial-size farms elsewhere and their ultimate failure looms large. Bankruptcies are likely to reduce their numbers in the coming years, and perhaps some survivors may want to reinvent themselves as exporters of a high-priced luxurious niche product targeted at the deep pockets of the ultra-rich, a segment that seems to suffer no slowdown. Like fine French wines, champagne and perfumes, high-end artisanal truffel-studded French sausage?

After a court last Thursday gave the Calais prefecture the go-ahead to dismantle the notorious Jungle camp outside Calais (blog 2/5/16), local officials have begun telling refugees that they will have to move out. No deadline was set, but after transfering some 3000 migrants to other shelters in Northwest France in recent months, authorities have already razed the crowded southern section of the camp and brought in a large number of converted shipping containers equipped with heating and plumbing to house some 1300 migrants while their asylum applications are being treated. They also tried to convince the other refugees to give up their attempts to reach England and apply for asylum in France.

However, Clare Moseley of British volunteer aid organization Care4Calais said that several aid groups have been opposing the dismantlement in court and that a new legal appeal against Thursday's ruling has been filed. Volunteers, aided by French students, toured the camp and explained to the migrants that they were allowed to stay while the appeal is pending. It appears that most have no intention to move anyway, like the Afghan man who said "It took me two years to get here and I have been here for three months now. I have tried lots of times to go to England. I have family there; it's the only place I want to go." Similarly, a Pakistani man (no-one gives his name here) said: "I'm staying here. It's either here or England."

Some of the camp's residents have moved into the heated containers, others leave daily in small groups on official buses that take them to other refugee centers. But most prefer to stay in the improved camp that contains a refugee-built church, a mosque, a language school for French and English classes, and several shops. Among them are more than three hundred unaccompanied children who have family in the UK and who could have their claims considered here, according to Rachel Robinson of the human rights group Liberty. British actor Jude Law, who visited the camp last week, called on David Cameron to allow unaccompanied children in the camp entry into the UK if they have family there.

The clean-up and eventual destruction of The Jungle has begun but is not likely to be finished anytime soon. Furthermore, the appalling lack of a coordinated European response to the migrant crisis and growing nationalism in eastern Europe bode ill for the refugees in the short term and for the very survival of the European Union in the long term.

THE BATTLE OF THE CIRCUMFLEX 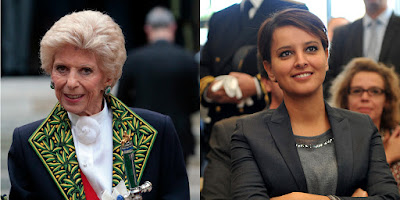 In the shadow of furious farmers and suffering refugees, another battle is quietly brewing in France: the recent circumflex-and-simplified-spelling issue has turned into an open confrontation between the Académie Française and the Minister of Education (blog 2/5/16). In an interview published on February 13 in the daily Le Figaro Hélène Carrère d'Encausse, Perpetual Secretary of the Académie Française, re-stated the position of the Académie: "A total opposition to any spelling reform but a conditional agreement on a limited number of simplifications that shall not be imposed by any authority and shall have to withstand the test of time." She insisted that the "limited simplifications" were proposed in 1990 by the Conseil Supérieur de la Langue Française and not by the Académie Française, "as the Ministry of Education has us believe."  The fine distinction between the Council and the Académie might have escaped mere mortals, but Najat Vallaud-Belkacem, Minister of Education, was not taken in and called on Mrs. Carrère d'Encausse to explain herself. The hair splitting that followed added little light to the situation but gave Mme Carrère the opportunity to slip in the fact that international studies have shown that the educational level in France has decreased over the years in comparison with other countries and that in 2016 we have one out of every five French students leaving school without proper reading skills. Ouch!

If the fine points appear rather immaterial and both the old and new spelling rules are accepted (so where's the problem?), one thing is clear:  nothing unleashes French passions like touching their language.