PRESIDENT TRUMP: WHAT IT MEANS FOR EUROPE 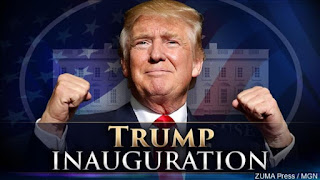 The election of Donald Trump as President of the United States has Europe baffled and worried. Only the leaders of extreme-right parties (in France, Holland and Germany, all facing elections this year) cheered this outcome, while the rest of a stunned European leadership tries to measure what effect this might have on the European Union, its security, its international trade agreements, immigration, the COP21 environmental agreement, etc.

There was good reason to worry after hearing the new President's aggressive inaugural speech which was sadly devoid of greatness or any inspirational message. Here was a blustering bully who on this grand occasion could do no better than give another campaign speech full of promises and threats, offending in the process the three past presidents who honored him with their attendance (Obama, Bush Jr. and Carter) with accusations of bringing the country to ruin and doing nothing about its problems. This was the mendacious and pugnacious campaigner who was not going to change now that he had won. The hateful speech was an embarrassment, killing the last spark of hope in those who had not voted for him. Even before the marching bands had stopped playing that afternoon, he had already set in motion the demolition derby against President Obama's greatest achievements by signing an executive order to begin dismantling Obamacare. No time to lose.

There was worse to come: the next morning he visited the CIA headquarters in Langley, Virginia, to first praise the institution he had slandered during his campaign, and then to segue into a lengthy and petulant outburst against those he claimed had falsely reported that Obama had drawn bigger crowds to his inauguration than Trump had. "When I looked out over the Mall I saw at least a million, perhaps a million-and-a-half people, all the way up to the Washington Monument!", he said, giving the lie to newspaper photos that clearly showed the contrary (and since have been flashed around the world). For good measure he added that people of the press were "among the most dishonest people in the world", a message echoed by White House Communications Director Sean Spicer who stated that "This was the largest crowd ever to witness a presidential inauguration, period!" and warned journalists that they would be held accountable. And then we learned about alternative facts... Oh, my!

It is hard to think of a worse start, but here we are: the man was elected democratically and we're stuck, unless...

... we hold him to his word that he is "giving the power back to the people". The people responded massively on the day after the inauguration when more than three million of them, many wearing symbolic pink knitted "pussy hats", walked in the Women's March on Washington (more than 500,000) and in cities across the United States, as well as in "sister marches" in most European capitals and in Asia. In all, 670 rallies were held all over the world, including one in a distant outpost in Antarctica and several in hottest Africa, to protest against President Trump. Never before has the world been so united in such numbers against a president who is seen as divisive, vindictive, irresponsible, and not qualified to hold our fate in his hands. This massive, well-documented, global uprising has boosted the protesters' spirits and given rise to a renewed civic interest in politics, with thousands of Americans giving notice to their Representatives not to cross a red line, and reminding them that their re-election is in the hands of the people. The mid-term elections in 2018 are sure to reflect today's widespread disapproval. 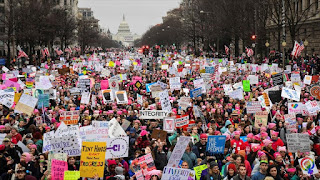 No one has forgotten the alleged Russian interference in the election process, the role played by the Director of the FBI, the fact that Hillary Clinton got three million more popular votes than the winner, the fact that Trump has refused to produce his tax returns, that he has not put his businesses in a blind trust, that his cabinet appointees are all billionaires or generals without government experience.

In his first few days at the helm Trump has declared the Trans-Pacific Partnership dead, the NAFTA agreement to be renegotiated, approved the building of the Keystone oil pipeline that Obama had blocked and the Dakota Access Pipeline through Sioux territory, giving the finger to environmentalists and casting doubt on the COP21 agreement on climate change signed in Paris in December 2015. With lightning speed he is trying to undo or damage as much of his predecessor's legacy as he can before congressional hearings begin. 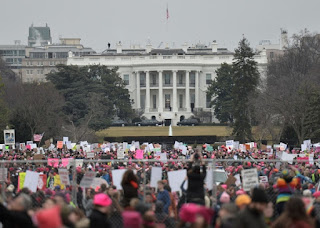 Why should this concern Europe? Because Trump considers the European Union as an economic threat to the US and likes to see it weakened, because he praised the UK's Brexit and encourages other member states to leave the Union, because he considers NATO obsolete, because he is attacking environmental regulations and does not believe in global warming, because his support of Putin and of Netanyahu's hardline settlement policies threatens the fragile stability in the Middle East, and because he is a bull in a china shop with the Red Button within reach.

No, Mr. Trump, Making America Great Again does not begin with giving (tax breaks) to the rich and taking (Obamacare) from the poor; with denying science (man-made climate change exists); with facilitating oil production and pipeline building (benefiting your investment portfolio) when alternative energy should be developed and dependency on oil reduced; with building walls and closing borders; with unfunding the National Endowment for the Arts and the National Endowment for Humanities; with threatening a trade war with Mexico; with turning an independent press against you. All this − the sum of your first week in office − has us worried. 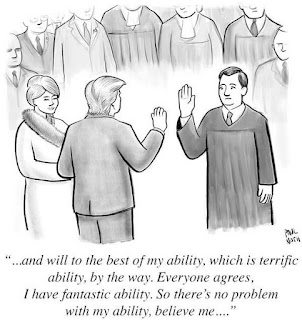 But some bright spots are already appearing on the horizon, not the least of which is that a weakened European Union may be strengthened by its united stance in response to your provocations. In Washington, the first ethics lawsuit has been filed against you while in office and we expect more to come. Your sabre rattling and offensive statements will surely provoke diplomatic incidents before long, and your uncontrollable tweeting will sooner or later set your own camp against you. Hello hope!

Next time, women (and men) will not only march on Washington, they will march to the ballot box − if you have not been impeached before then.

PS:  Another wee bright spot:  the tsunami of Trump cartoons; they are really funny!

Posted by Anne-Marie Simons at 6:07 AM