On October 1st two young women were killed at the Gare St. Charles train station in Marseilles by a knife-wielding man who, according to witnesses, yelled Allahu Akbar as he slit the throat of his first victim and stabbed the second one to death. The victims were two young cousins, both students, 17 and 21 years old, respectively. The assailant was shot dead by police and later identified as a Tunisian illegal immigrant with a long police record for minor crimes and no less than 17 different identity papers. The day before the killings he had been arrested in Lyons for shoplifting a jacket from a clothing store, but was released for lack of evidence and, as it turned out, for lack of a place to hold him until he could be extradited. The case prompted Interior Minister Gérard Collomb to call for an investigation of the procedures followed and culminated in the firing of the Police Prefect of the Rhône-Alpes Region for "a serious administrative dysfunction" of his office. In a television interview on October 15th President Emmanuel Macron announced that henceforth any illegal alien who commits a crime on French soil will automatically be expelled to his country of origin. He also announced that a new law will be introduced in Parliament this month to correct the weaknesses of the existing system.

Contrary to his earlier decision to avoid television interviews and let the Prime Minister and the official spokesman speak for him, Macron nevertheless came to feel it was necessary to respond to his growing reputation as the "president of the rich" and the perception that he is arrogant. "I am not arrogant," he said, "but I am determined." On the subject of reducing the wealth tax which would favor the rich, he said: "I don't believe in the French jealousy that seeks to tax success. What has been the result? Wealthy people left the country and we lost a lot of money and talent. It's a huge hypocrisy. I want to encourage success."

He also rejected criticism over his choice of words when faced with striking workers, and said that in heated exchanges he sometimes uses "popular" words, such as "slackers" and "troublemakers" but never meant to humiliate anyone. "I tend to say it as I see it, unlike the sterilized public discourse of past elites."

Confident that his new labor policies will benefit not only employers but workers as well, he extended unemployment payments to those who leave their jobs voluntarily in search of a better position, with free training programs and reschooling as part of the deal, and promises palpable results within two years. For now, the most palpable thing is his self confidence and determination which, I suspect, will be rewarded.

To those who accuse him of a monarchical style he says: "France is a 'regicidal monarchy' that wants to have a king as long as it can overthrow him." Spoken like a true crownless monarch who is not loosing sleep over dropping popularity ratings.

For lack of time this month due to travel, I would like to end this blog with an article I wrote recently about one of my favorite places:  Chateau La Coste. 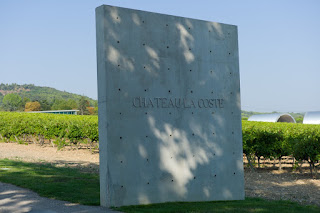 One of Aix-en-Provence's greatest attractions lies exactly ten miles out of town. It's a winery. Yes, but...  It's an art centre. Yes, but... It's both, and more than that. It's CHATEAU LA COSTE, a vineyard set in a beautiful hilly landscape that is dotted with world-class architecture and works of art. This is where in 2002 Irish businessman Patrick (Paddy) Mc Killen bought the existing La Coste winery near the village of Le Puy Ste Réparade to indulge his two passions: wine-making and creating a center for contemporary art. Today, fifteen years later, the gradual conversion to organic vines is complete, and the latest building by a renowned architect (Renzo Piano's exhibition hall) has just been opened to the public, following buildings by such star architects as Tadao Ando, Jean Nouvel, Jean-Michel Wilmotte, and Frank Gehry's music pavilion. Two more buildings are planned: one by the firm of legendary Brazilian architect Oscar Niemeyer and another by British architect Richard Rogers (who together with Renzo Piano designed the revolutionary Centre Pompidou in Paris). This year also saw the opening of a 5-star hotel-spa on the grounds, with a restaurant run by chef Gérald Passedat of three-Michelin-star fame in Marseilles.

There are two other restaurants on the premises: one in the Tadao Ando art center and an Argentine restaurant that opened this spring, with a menu that leans more to French than to Argentine cuisine. In addition, there is La Terrasse, a pleasant outdoor cafe for simple fare at lunch and dinner times. These will take care of your basic needs so that your more spiritual needs can wander off into the gentle hills and feed on the works of art along the four kilometers of trails of the domain.

As Paddy McKillen began to create the winery of his dreams, he called on famous architects to design a number of buildings, and invited sculptors to spend some time in residence at Chateau La Coste in order to familiarize themselves with the landscape and choose a spot for their work. This has resulted in some two dozen works (so far) dispersed throughout the 200-hectare estate by an international roster of artists as diverse as their countries of origin. Among them: Louise Bourgeois (France), whose giant Crouching Spider greets you as you arrive at the Reception building, Ai Wei-Wei (China), Paul Matisse (US), Tunga (Brazil), Richard Serra (US), Tracey Emin (UK), Alexander Calder (US), Lee Ufan (Korea), and everybody's favorite, Tom Shannon (US), whose shiny "Drop" hovers among the trees like a UFO just about to touch down. On the highest point of the domain stands the little 17th-century chapel, beautifully restored and "modernized" with a glass surround by Japanese architect Tadao Ando, who also created the wooden "Four Cubes" environment pavilion and several origami benches along the way. Next to the chapel stands a large red cross, fashioned from glass balls by Jean-Michel Othoniel.

From this vantage point (and others along your path), take a minute to admire the surroundings, let your eyes glide over the vines, take in the deconstructed music pavilion of Frank Gehry down below, the Vietnamese teahouse and two Jean Prouvé houses that border the vegetable garden designed by famous landscaper Louis Benech, and move toward the Luberon mountains in the distance and the ruins of a castle above the village of Cadenet. Then proceed on your way down, past other works of art toward the final one, the interactive Meditation Bell by Paul Matisse. Set among the trees, this understated but ingenious metal structure allows you to pull a cord that moves two rubber-clad hammers to hit a hollow cross bar, emitting a deep, sonorous sound that like a Buddhist Ommm mantra hangs in the air, almost forcing you to close your eyes, sit down on the low stone wall surrounding the Bell and let the sound envelop you like a final blessing: "You have visited a place of beauty and peace. Now go, respect nature and act responsibly." Some visitors may hear a different message, but the important thing is to listen to the sound, feel its vibrations in your body if you put your ear to one of the metal tubes, and let it talk to you.


As you follow the narrow tree-lined path back, past the music pavilion towards the underground parking, the Bell may whisper in your ear: "Stop at the Terrasse for a refreshing glass of rosé. You deserve it."