PRESIDENT MACRON — AT HOME AND ABROAD

MACRON −  AT HOME AND ABROAD

Recently, French president Emmanuel Macron drew international attention when he stepped in to ease the tension in the Middle East following the mysterious resignation by Saad Hariri as Prime Minister of Lebanon who had fled to Saudi Arabia because he feared for his life.

Soon, rumors began circulating that Hariri had been forced to resign by Sunnite Saudi Arabia and used as a pawn in its fight against Shiite Iran which is supporting the Lebanon-based Hezbollah fighters in Syria. The Hariri "kidnapping" with its spy-novel whiff and its potential for setting off open warfare in the Middle East took place while President Macron was attending a conference in Dubai (UAE). He quickly scheduled an emergency meeting with the Saudi crown prince in Riyadh to discuss the situation of Lebanon, a former French colony, and to reiterate France's attachment to Lebanon's sovereignty and to the stability of the entire region. Two days later he sent his Minister of Foreign Affairs to Riyadh to meet with Hariri and invite him to come to France before returning to Lebanon to clarify his resignation. Subsequently, Hariri did come to France with his family and has since returned to Beirut where he'll meet with President Aoun before officially announcing his resignation (or not).

Even before this incident, Emmanuel Macron's picture had been burnished in the international press where so far he was perhaps best known for his youth and his marriage to a woman 24 years older than himself.


Earlier this month, British newspaper THE GUARDIAN devoted its weekly Long Read − a four-page in-depth article by French author Emmanuel Carrère − to the Emmanuel Macron who at age 39 became the youngest ever president of France after barely six months of campaigning. Noting the unlikeliness in tradition-bound France of a young person rising at record speed through a sea of grey-haired politicians to take the top job, the interviewer tried to delve into the personality behind the politician, which did not reveal much except that he loves poetry and often quotes it, and that he is still madly in love with his wife who is also his "best friend." More inclined to talk about his view of the world than about himself, the young president nevertheless gives the impression of being up to the task. With characteristic self-confidence, he said: "If I don't radically transform France, it will be worse than if I did nothing at all." 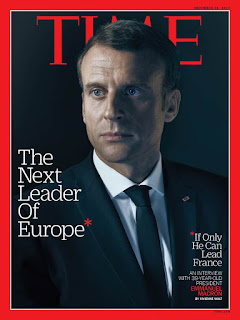 Macron has promised much and expectations are high. Whether he can fulfill his promises remains to be seen, but he has made a very good start and has managed to win recognition for his political and diplomatic skills far beyond France.

Around the same time, TIME Magazine featured President Macron's picture on its November 20th cover and devoted a five-page article to The Next Leader of Europe. Since his election in May 2017 and his promise to overhaul the complicated French labor laws, he has booked a string of successes at home, where even his far-left opponent Jean-Luc Mélenchon had to admit defeat when his calls for massive strikes and demonstrations found insufficient following. With England's Brexit vote, and a weakened Angela Merkel's on-going struggle to form a coalition government in Germany, Macron does indeed seem the man of the hour in Europe. Knowing his total commitment to the European project, we could do worse.

Just before the commemoration of the November 2015 terrorist attacks in Paris, President Macron ended the State of Emergency that was declared two years ago and replaced it, effective November 15th, with a new Anti-Terrorism law that gives the police greater powers to search property, conduct electronic eavesdropping, and shut down mosques suspected of preaching hatred. Critics were quick to warn that the new law may undermine civil liberties, but Macron insists that it is necessary in order to counter jihadist terrorism which remains the biggest security threat in France since the Paris and Nice attacks that killed more than 240 people. In response to Human Rights Watch concerns, Macron said that the new legislation will be reviewed in two years and adapted as needed with the oversight of judges.

The Islamic State jihadists have now lost most of their territory in Syria and Iraq and are retreating in great numbers. Among them are some 700 French fighters who want to come back to France, sometimes with wife and children. These returnees' cases will be carefully reviewed on an individual basis, said Macron. The 398 who have already returned in the past are all under formal investigation and a number of them have been jailed.

This year some 6000 "post-Bac" students did not manage to enter university for lack of space. The Baccalaureate, the French diploma issued after completion of secondary education, is roughly equivalent to a US high-school diploma plus two years of college. The Bac gives admittance to university but there is no pre-selection of majors in French lycées, which means that this selection often takes place after the first year at university when students have a better idea of what they want. Education is free in France, and students are less pressed to get a job than in the US where graduates are burdened with student loans that have to be repaid.

The French Ministry of Education has promised to find a solution for the lack of space for university entrants and plans to introduce a pre-selection program at the lycée level so as to better channel the post-Bac applicants. It also plans to "update" the lycée curriculum to respond to today's needs in a changing globalized workplace where at the very least a working knowledge of English is required − a subject in which France lags far behind other nations and, as a result, French applicants for international jobs do less well than other Europeans.

Indeed, in a country where Philosophy is taught in high school and where erudition is highly valued, it has always surprised me that the seniors among my friends (60-plussers) do not speak a word of English even though they are highly educated (Bac+10). It simply was not part of their curriculum, as French educators have long considered foreign languages as a rather marginal matter. As recently as May 2016, the Minister of Education in the socialist government of President Hollande announced the elimination from the high school curriculum of Latin, Greek, and mandatory German as "elitist" subjects. (Remember President Hollande's letter to President Obama where he signed off with "Friendly, François"?) 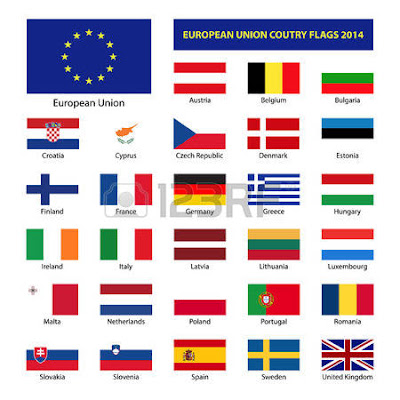 But things they are a'changing. Emmanuel Macron not only speaks fluent English himself (very rare for a French president), but intends to give foreign languages their proper place in French schools. In a speech to French and foreign students at the Sorbonne last September on the subject of a strong Europe, Macron announced his proposal that French university students speak at least two European languages by 2024, and that as part of their education they spend at least six months abroad. Now THAT is revolutionary.