TRUMP AND THE WORLD; D'ORMESSON AND JOHNNY HALLYDAY; ONE PLANET SUMMIT

TRUMP AND THE WORLD

It's as if a dark cloud has descended on the United States ever since Donald Trump was elected president. Under his leadership, America has lost its moral compass and its status as leader of the free world. Abroad, his incessant tweeting, his recklessness (North Korea, Jerusalem) and his shameless irresponsibility (withdrawing from Paris climate agreement) have lost him the respect of heads of state of all persuasions and awakened in the average citizen a reflex of shock and disdain for this embarrassing figure in the White House. Unflattering cartoons abound, as does concern and criticism from newspapers, international pundits, the United Nations Security Council and even the Pope.

As most Americans already know, their president is not only isolating his own country but, following his outrageous "decision" on Jerusalem, is also destabilizing others. Especially in that city of permanent tension and a fragile co-existence between Israelis and Palestinians where Muslims and Christians have holy shrines that are unthinkable under Israeli control, it is hard to say if it was ignorance or arrogance that led Trump to go where he shouldn't have. The predictable violent clashes between Palestinians and Israelis and an escalating anti-Americanism have only just begun and could well spread farther afield. Trump's motive? Fulfilling a campaign promise to his evangelist supporters (and of course taking another dig at President Obama who had a notoriously bad relationship with Netanyahu). With a State Department that he disrespects and has downsized dangerously, Trump tends to take counsel from the business people he has surrounded himself with rather than from professional diplomats or Washington experts. The results are predictably messy, but a compliant and self-serving Republican Party seems unable to reign in the dangerous excesses of the unstable man they so slavishly serve. On the Jerusalem question, Jared Kushner, Trump's orthodox-Jewish son-in-law and his Special Adviser for the Middle East, as well as the powerful Jewish lobby, deserve their share of the blame for this unnecessary provocation, but it is the heavy footfall of maniacally egocentric Donald Trump himself that is heard around the world. The black cloud is now hanging over all of us.

Even though he is already back-tracking (he may not move the American embassy to Jerusalem after all, but will consider Jerusalem Israel's capital), it is too late to undo the damage caused in international circles where not a single government supported him. Everyone except Donald Trump seems to realize that with this decision America, facilitator of the Oslo Peace Accords signed in 1993 at the Clinton White House by Israel (Rabin) and Palestine (Arafat) and sealed with their famous handshake, disqualified itself from its role of mediator in the difficult negotiations between Israel and Palestine who now have to deal with each other directly − an unpromising prospect. 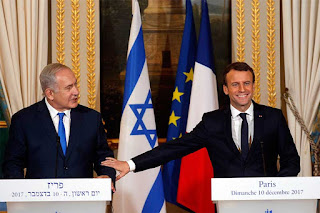 Two days after Trump's decision on Jerusalem, Benjamin Netanyahu flew to Paris for a meeting with President Macron who has become the go-to European leader. They held a joint press conference at the Elysée Palace where Macron made it clear that he disagrees with Mr. Trump's unilateral decision and asked Mr. Netanyahu to give peace a chance by resuming the negotiations with the Palestinian Authority and to stop the building of Jewish settlements in Palestinian territory, including occupied East Jerusalem. "It is important to make that gesture towards the Palestinians" he told Netanyahu, who left Paris empty-handed for a meeting with EU leaders in Brussels the next day. There, too, he was rebuffed by EU's Foreign Policy Chief Federica Mogherini who said that the EU's position joins the international consensus of a two-state solution negotiated between Israelis and Palestinians, with Jerusalem as capital of both states. 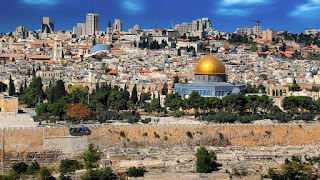 [This brings back a personal memory from my visit to Jerusalem in the mid-1990s where my husband was attending an international conference. Our hotel was located near the Knesset and had extremely high security, including elevator operators in every lift and plenty of precautionary advice for its guests. Our buses for the spousal program of visits from the Sea of Galilee in the north to Masada and the Dead Sea in the south were protected by two machine-gun-wielding soldiers, one front, one aft, who never left our side. Back at the hotel I looked into some less "formal" visits and I asked directions to The American Colony, a charming hotel in East Jerusalem where the international press used to hang out. I was told in no uncertain terms not to go to East Jerusalem. "You will get raped" the female clerk told me. "Is that a promise?" I joked, but nobody laughed. "Anyway, no taxi will take you there. They will just drop you off at the border," which turned out to be true, but a short walk to The American Colony met my expectations of a delightful place for a relaxed lunch in the sunny courtyard of a former sultan's palace, among fragrant orange trees and the background sound of many different languages. Life seemed normal here, just a short distance from our hotel with its Them vs. Us atmosphere. Sadly, then as now, these two neighborhoods remain separated by deep mutual suspicion and a sea of irreconcilable differences.] 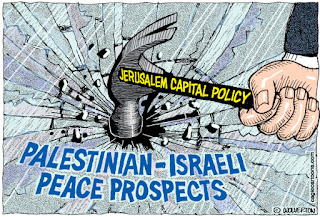 Trump's latest misstep turned into a poisoned gift for Netanyahu, with its worldwide condemnation and little benefit to Israel. It also may have been just another diversionary tactic by Trump to keep attention away from the Russian investigation by Mr. Mueller that may ultimately lead to Trump's downfall. When one man, through ineptitude, egocentrism, and disregard for the consequences of his ill-considered actions can threaten world peace and cause the United Nations Security Council to hastily convene in response to the growing madness, the destitution of Trump as president concerns us all.

At the time of the Jerusalem bombshell, France was totally absorbed by the death of two national figures. 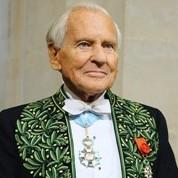 Jean d'Ormesson, writer, philosopher, newspaper commentator, and the most visible member of the prestigious Académie Française, died December 5th, aged 92. He was a frequent guest on television programs where he sparkled as much by his erudition as his mischievousness, which gained him a certain popularity beyond the world of intellectuals. He was honored with a national funeral ceremony at Les Invalides, attended by former presidents, politicians, Academicians and fellow writers. In his eulogy at the solemn homage in the Cour d'Honneur, President Macron called him "a prince of letters" and "the best of the French spirit". 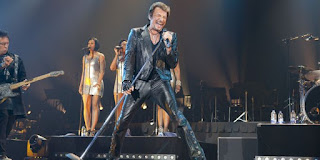 The next day, Paris saw another national funeral of a very different kind. Johnny Hallyday, the French Elvis Presley who was little known abroad in spite of the millions of records he sold, had died at age 74 a day after d'Ormesson and was given a huge send-off covered in full by both French public TV channels. In contrast to the formal Hommage Officiel to Jean d'Ormesson, this was an Hommage Populaire which drew a million fans to the Champs Elysées and the Place de la Concorde, closed for the occasion, where they sang his songs and chanted Johnny! Johnny!, throwing flowers at his hearse as it followed 700 bike riders straddling their Harley Davidsons just as their hero had done. The massive crowd of all ages reflected the 60 years of Johnny's career that since its modest beginnings had never stopped growing and retained its appeal to all generations by the simple words of love and loss that spoke to everyone. Impossible to find a single French person who does not know at least one of Johnny's songs by heart. 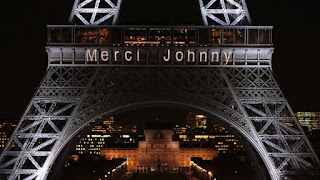 This Rock'nRoller was a cult figure, but one who was buried with honors accorded to few. President Macron addressed the crowd gathered at the Place de la Madeleine "on this sad day in December". He called Johnny a friend and a brother who was a part of all of us, a part of France, and asked the people to applaud with him as the casket was carried into the church. There, joined by his wife Brigitte, his prime minister, his minister of culture, the mayor of Paris and other government officials, he attended the funeral service which was broadcast on a giant screen for those outside.

I could not help seeing a certain excess here for someone who - though very popular - was also a tax evader, something that is not easily forgiven in France (government ministers have gone to jail for it, and Gérard Depardieu, who first moved to Belgium and subsequently to Moscow, was fiercely attacked in the press). Johnny had chosen Switzerland as his tax haven and spent most of his days in any one of several residences abroad (including Los Angeles), when he was not performing in France, where he also had a house but not his principal residence. Moreover, disappointing many of his fans, he had asked to be buried on the Caribbean island of St. Barts where he also had a residence.

Was this a touch of Realpolitik from a man who is perceived as a president for the rich? In praising this "fils du peuple" Macron spoke to the many people from all walks of life that will hear no evil of their Johnny. As much as they despise the very rich in general, Johnny remains for them the unblemished hero with the big heart to whom all is forgiven.

NO REST FOR THE WEARY 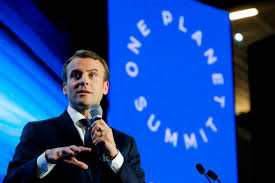 On Tuesday, December 12th, second anniversary of the signing of the Paris Accord on Climate Change, President Macron opened the One Planet Summit, co-hosted by the United Nations, the World Bank, and France to deal with the financing of green solutions for the reduction of global carbon emissions. It was also an occasion to counter President Trump's withdrawal from the 2015 Agreement and his argument that the Paris Accord was "bad for business". "We're not moving fast enough; it is time to act and win this battle," said Macron in his opening address to more than 50 world leaders and government representatives, investment fund managers and a number of wealthy individuals such as Bill Gates, Richard Branson, and Michael Bloomberg. Former Secretary of State John Kerry and former Governor of California Arnold Schwarzenegger also were in attendance. 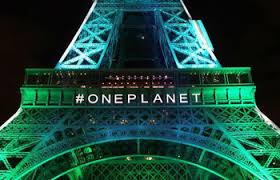 The President of the World Bank announced that the Bank would stop financing coal and gas explorations in 2019. French insurance giant AXA said it would stop investing in any company involved in coal mining and will withdraw nearly $3 billon from the sector. More than 200 large-scale investors, including the HSBC and the California pension fund CalPERS, agreed to put pressure on the 100 most polluting companies in the world in the oil, mining, and transport sectors. The European Commission and the Gates Foundation earmarked large sums for agricultural research to combat the effects of climate change on farming. And in defiance to Donald Trump, President Macron invited 18 foreign scientists (13 of them American) to come and work in France for the rest of Donald Trump's presidency, funded by 20 million euros in French research grants.

All this and more points to a new impetus to the Paris Accord and to the necessary funding to meet its goals. We have Donald Trump to thank for that, said billionaire Michael Bloomberg, former mayor of New York City.

On this note of hope, I will sign off and bid you Goodbye until next year. As this turbulent year 2017 comes to a close, may you all find solace, pride, and inspiration to take on the next year and whatever it may bring us. 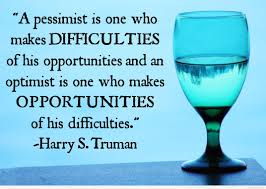 HAPPY HOLIDAYS TO ALL!

Posted by Anne-Marie Simons at 2:30 AM