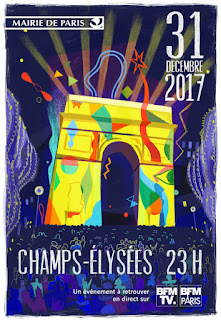 In France the year began with the usual fireworks of burning cars (more than 1000) on New Year's Eve and numerous clashes with police that saw ten police officers wounded, two of them seriously, and 510 troublemakers arrested. Most of the incidents occurred in the outlying areas of Paris, where high unemployment, poverty, and a concentration of immigrants lie at the core of much of the unrest. For the young men among them car burning on New Year's Eve has become their preferred way of letting off steam and pent-up frustration.
In Paris, on the other hand, Mayor Anne Hidalgo had organized a grand show of music and projections at the Arc de Triomphe that drew 300,000 people to the Champs Elysées where a heavy police presence assured the safety of the packed crowd. It was a successful exercise in crowd protection in this country where the threat of a terrorist attack is always present. 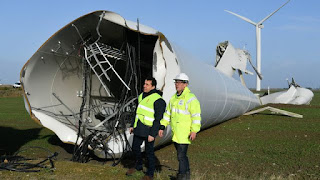 In more ways than one the year 2017 ended with a bang. After two earlier winter storms that caused flooding and cuts in electricity but luckily cost only one human life, hurricane Carmen hit France's Atlantic Coast on December 31st with local gusts of such force that it knocked down a 67-meter-high wind turbine in the Vendée area. The 260-ton turbine snapped off just above its base in the first incident of this kind. An ongoing investigation will determine whether this might have been caused by a mini tornado. 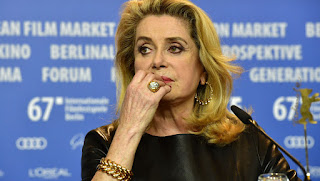 A storm of another kind was unleashed by the publication of a letter signed by Catherine Deneuve and 100 other French women in the respected daily Le Monde in response to the #MeToo movement and its French equivalent #Balancetonporc (Snitch on your Pig) that famously took down the Hollywood mogul and sexual predator Harvey Weinstein. The signatories denounced the flood of accusations of certain acts such as touching a knee, trying to steal a kiss, wolf whistles, clumsy compliments etc. as "sexual harassment." Women can say No to unwanted attention from men who, nevertheless, should be allowed to flirt, was the message. "Rape is a crime but insistent or clumsy flirting is not, nor is gallantry a macho aggression." The lack of distinction may be due to a form of American puritanism, the letter implied.

The inevitable backlash soon followed, led by Italian actress Asia Argento, among the first to accuse Harvey Weinstein, and soon was taken up by the foreign press. A week later, Catherine Deneuve accepted an interview from Libération wherein she clarified that she had signed the letter because she agreed with its premise but later took exception with the statements of certain signatories on French television. She stated that she did not consider herself a feminist ("I am a free woman and don't belong to any group") and reminded the interviewer that in 1971 she had signed the "Manifesto of the 343 Sluts," a declaration of 343 advocates for women's reproductive rights who admitted publicly that they had had an abortion when it was illegal in France. Feeling misinterpreted by her accusers, she nevertheless offered apologies to those victims of real sexual abuse who might have been offended by the letter she co-signed. Calm has returned... for now. 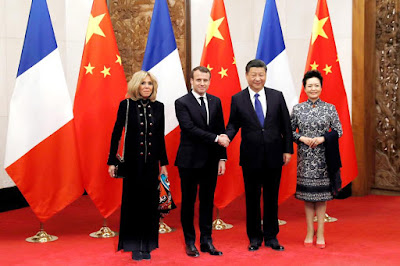 "When the winds of change start blowing, some will build walls, others windmills"— Chinese proverb. France will build windmills, says President Macron.

On January 7th, Emmanuel Macron began a three-day state visit to China with a view to boosting Europe's economic ties with China and increasing France's global influence. In the wake of Brexit and Germany's difficulties in forming a coalition government, Macron has been filling the void by taking on the role of European leader. His wife Brigitte and some 50 French business leaders accompanied him on the trip. 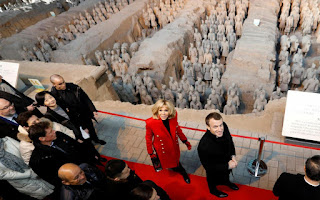 After visiting Xi'An, the ancient imperial city and hub of the old silk roads, and the impressive terra-cotta army of 8000 warriors, the Macrons flew to Beijing where they were given a tour of the Forbidden City. Taking a clue from China's panda diplomacy, Macron offered President Xi-Jinping a magnificent 8-year old gelding from the Garde Républicaine, complete with its special saddle and a sabre. He also brought two messages: first, the tremendous possibilities that closer cooperation between China and Europe could bring and his total commitment to that effort; and second, the growing concern in Europe and elsewhere over China's unfair trade practices and the resulting trade deficit of €30 billion in France alone. France and the EU want more reciprocity in their trade relations with China and also want to take advantage of China's $1 trillion New Silk Road Initiative, which Macron says must be a two-way road. "After all, the ancient Silk Road was never only Chinese". 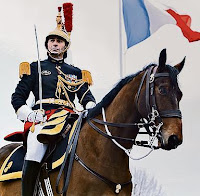 Several multibillion-euro contracts were signed during this visit, notably with Airbus (184 planes) and with Areva for the construction of a nuclear-waste treatment plant in China.

Before leaving, Macron promised to come back to China at least once a year, presumably with wife Brigitte who is very popular in China where their unusual marriage is viewed as "very romantic".

As Emmanuel Macron keeps gaining in popularity and international status, Donald Trump seems to be doing everything he can to turn the world against him. Latest case in point: Switzerland. 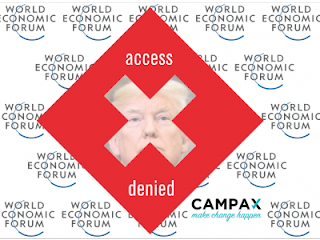 No sooner had President Trump announced that he planned to attend the 2018 World Economic Forum in Davos later this month than the Swiss campaign group Campax launched a petition to keep Donald Trump away from Davos. The petition gathered more than 12000 signatures on its first day. Trump, who would be the first sitting US president in 20 years to attend the Forum, intends to present his America First agenda to the audience of world leaders and business executives. As Campax explained in its petition, "A person who does not believe in anything that constitutes, in our view, a civilized society, has no place here in Switzerland." This statement was issued a day after Trump made his infamous remark on immigrants from "shithole countries" that met with worldwide condemnation, including from the Office of the High Commissioner for Human Rights of the United Nations in Geneva.

This follows London's rejection of a Trump visit by London Mayor Sadiq Kahn last year after Theresa May had invited him because he feared massive anti-Trump demonstrations and could not guarantee Mr. Trump's safety. When Trump announced last week that he would not go to London to open the new American embassy there, Mr. Kahn tweeted: "It appears that President Trump got the message from the many Londoners who love and admire America and the Americans but find his policies and actions the polar opposite of our city's values of inclusion, diversity and tolerance. [...]  Let's hope that Donald Trump also revisits the pursuit of his divisive agenda."

Who could have believed in pre-Trump days that any country would openly object to the visit of an American president? Times have changed, and so has America, sadly not for the better.

Posted by Anne-Marie Simons at 3:04 AM