On November 5th, under a mid-day clear-blue sky, a five-story apartment house in a popular neighborhood in the center of Marseilles suddenly collapsed in a heap, pulling its next-door neighbor with it in a roar and a cloud of dust. As fire trucks and rescue services got to the scene it was quickly apparent that a fragilized third building was in danger of toppling without its neighbor's supporting walls and was preventively destroyed. All three had been in poor condition and one of them, owned by the City of Marseilles, had been declared uninhabitable in 2015 but was squatted. Final tally:  eight bodies pulled from the rubble, 100 people displaced, and some ugly facts about  Marseilles brought to the surface.

In this second-largest city of France, with over a million inhabitants, there is no dearth of dilapidated buildings. Some of them have been expropriated by the City while others are owned by unscrupulous investors or the mafia who buy up distressed property and pocket the government subsidies that serve to renovate these buildings and bring them up to code. However, these renovations are often largely cosmetic and the apartments are then rented to immigrants or low-income people who receive rental subsidies from the government. Lax and infrequent building inspections, which rarely seem to result in the necessary repairs, have caused the number of run-down buildings to grow over time while the City of Marseilles proceeded on a major renovation of the touristy Vieux Port area and of the main railway station, built several new museums including the stunning MUCEM, expanded the metro lines, built a new modern tramway, expanded the airport with a low-cost hub, built a new cruise ship port, and gradually turned Marseilles into an attractive business environment and a desirable tourist destination that earned it the designation of Cultural Capital of Europe in 2013. Good for Marseilles, but bad for its stock of aging buildings. 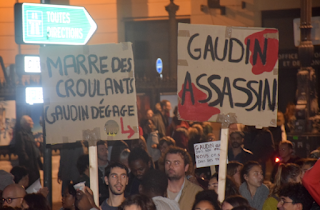 The uproar over the collapsed buildings forced the local authorities to rapidly inspect and subsequently evacuate a number of decrepit buildings throughout the city. In the end, 703 people were rendered homeless and temporarily housed in hotels while awaiting essential repairs. After initially trying to blame the recent heavy rains for this disaster, 79-year-old Mayor Jean-Claude Gaudin finally admitted that the city had failed its low-income tenants and that the inspection system would be overhauled. Gaudin, who has been mayor of Marseilles for 23 years, is known to have a cozy relationship with the local mafia, which is no doubt of mutual benefit. A grandfatherly figure, who is generally seen by the Marseillais as someone who does no harm and manages to keep the various factions (unions, mafia, political opponents) in check, found himself roundly booed this time when he showed little emotion after the disaster, took no personal responsibility for it, and did not show up for either of the two marches in honor of the victims. Angry citizens carrying placards reading "Gaudin Assassin!" and calling for his resignation were kept at a safe distance from City Hall and tear-gassed when they refused to disperse.

His mandate runs until 2020 and he has refused to resign. But the cry of the people and the results of an investigation into his part of responsibility for this tragedy may well cut short his final term. It may be too much to expect rectitude and total transparency from a complicated city like Marseilles, but it certainly deserves better than what it's got.

On November 11, France celebrated the 100th anniversary of the signing of the 1918 Armistice that ended the First World War and led to the signing of the Peace Treaty of Versailles six months later. This devastating four-year war that killed ten million soldiers and nearly seven million civilians was ultimately won with the help of American troops, some 126,000 of whom were killed and lie buried in American cemeteries in France.

More than 70 world leaders attended this centennial commemoration in Paris, including Donald Trump, Angela Merkel, Theresa May, and Justin Trudeau, who would each visit a cemetery of their countrymen prior to the official ceremony on Sunday before the Tomb of the Unknown Soldier at the Arc de Triomphe. [After visiting a British cemetery in Belgium and in France, Theresa May flew back to London to attend the British commemoration there on Sunday with the Queen.]

Donald Trump's program listed a visit to the American cemetery of Aisne-Marne, about 50 miles northeast of Paris, on Saturday but this was canceled due to rain. Apparently, his helicopter could not fly safely with low-cloud coverage, even though the distance could easily have been covered by car, as Merkel, May had Trudeau had done. Trump's cavalier decision drew sharp criticism and was considered particularly insensitive in view of the fact that most of these soldiers had died in a grueling trench war, falling face down in the mud after weeks of rain. The unplanned cancellation left Mr. Trump with a free afternoon which he is said to have spent watching television in his rooms at the American Embassy. The following morning, stung by the criticism and ridicule, he did go and pay his respects at a closer-by American cemetery in the Paris suburb of Suresnes. Yes, it was still raining and he went by car.

Trump's Paris visit got off to a bad start when upon his arrival on Friday morning, even before Air Force One had come to a full stop on the tarmac, he fired off an angry tweet to his host President Macron, accusing him of wanting to create a European army to defend itself against the US. "Very insulting! " This was a misreading, misunderstanding or poor translation of what Macron had said a day earlier in a radio interview, when he explained the need for a European army because "faced with a menacing Russia which is at our borders, we should be able to defend ourselves without relying solely on the US and in a more sovereign way". Later on in this interview he talked about cyber threats and the attempts by many to "intrude into our cyberspace and interfere with our democracy. We must protect ourselves against Russia, China, and even the United States."

Later, when they met face to face before TV cameras, Macron explained to Trump that he had meant that the EU should do more to coordinate its 27-nation efforts in a common defense force, i.e. create a European army, to be able to react quickly without depending on the United States; a message repeated forcefully by Chancellor Merkel before the Bundestag in Berlin. Macron did, however, agree with Trump that the EU should pay a greater share of the NATO budget to which the US contributes proportionately more. This seemed to have calmed the waters and they shook hands on it. But Trump appeared sullen and moody throughout his visit and on his return to Washington sent another accusatory tweet to Macron, showing that nothing was forgiven or forgotten.

The Sunday ceremonies were somber and moving, starting with a brief walk of all the Heads of State (except Mr. Trump who arrived later by car), sheltered under a sea of black umbrellas against the persistent rain, to the Arc de Triomphe where school children around the Tomb of the Unknown Soldier read messages written by soldiers in various languages, a European youth orchestra played with a Russian conductor, and Chinese-American cellist Yo-yo Ma played Bach. President Macron then addressed the assembled leaders, including Trump, Putin, Merkel, Erdogan of Turkey, Netanyahu of Israel, Trudeau of Canada, the kings of Spain and Morocco, and many more. His speech focused on the importance of international cooperation to avoid war, the need for a rules-based world that is open and multilateral, and specifically rejected nationalism which he called "a betrayal of patriotism. By saying 'Our interests first, who cares about the others,' we erase what a nation holds dearest, what gives it life and what is essential: its moral values."

Following the Sunday ceremonies and lunch at the Elysée Palace, President Macron had organized a Peace Forum as an opportunity for the Heads of State and Government or their representatives from 84 countries "to reflect on world governance while we commemorate the end of World War I and recognize our collective responsibility." The 3-day Forum, held in the beautiful Grande Halle de La Villette in Paris, was opened by UN Secretary General Antonio Gutteres, and German Chancellor Angela Merkel, Turkey's president Erdogan and Russia's president Putin were among the speakers that afternoon. The Forum was conceived as an annual event for project leaders worldwide, "bringing together political, economic, and civil society representatives [...] to seek solutions to current world challenges with an emphasis on multilateral and collective action."
This is not President Trump's cup of tea. He snubbed the Forum and flew home.

It is a sad day when a president of the United States, Commander in Chief of the Armed Forces (and repeated draft dodger), attends an all-important commemorative event and, in full view of the entire world, shows a shocking lack of respect for those Americans who fought and died here, apparently incapable of behaving with even a minimum of decorum and courtesy as he slouches through two days of ceremonies as if he had better things to do elsewhere.

As the rest of the world looks on with embarrassment or glee, Trump keeps bumbling along, ignorant and belligerent, not knowing the difference between the Balkans and the Baltics, disrespecting the press and dismissing journalists he does not like, to say nothing of his inane tweeting which nobody can seem to control. His tweet storm directed at Emmanuel Macron after the Paris visit got no response from Macron, who said days later when questioned in an interview: "I don't do policy or diplomacy by tweets." Somebody please pass that on to Mr. Trump. 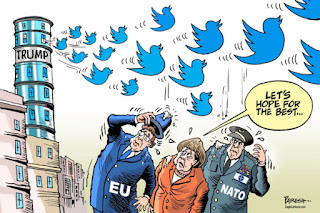 Posted by Anne-Marie Simons at 2:30 AM