GILETS JAUNES QUIET FOR NOW BUT DISCONTENT SPREADS TO POLICE

Last Saturday's demonstration by Gilets Jaunes protesters on the Champs Elysées, the fifth in a row since mid November, came and went without major material damage. The police was well prepared with armored vehicles, tear gas and water cannons, but fewer protesters showed up (down to 66,000 from 136,000 the previous weekend) and there were far fewer hooligans. The movement was beginning to unravel and public support was waning after the Gilets Jaunes had won major concessions from the government. 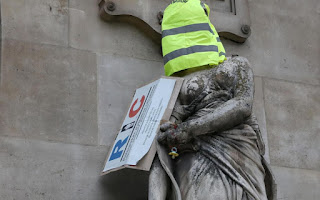 Those who continue to block traffic circles and toll stations are being forcibly removed by police, but not before a few more toll stations in the south had been set on fire and destroyed this week. VINCI, one of the toll road operators, estimated the damage due to vandalism and lost toll income at tens of millions of euros, and overall loss of business in all sectors has climbed to an estimated €2 billion to date. Even though the Gilets Jaunes have become less visible, the movement is far from dead and is now calling for an RIC (Référendum d'Initiative Citoyenne), a Citizens' Referendum. Small encampments of GJ have sprung up near road crossings or toll stations where they plan to spend Christmas, encouraged by supporters who stop by with hot meals and an occasional Christmas tree. The GJ promise to be back with more demonstrations after Christmas to push their demand for a Referendum as a counter power against the government.

As calm seemed restored in Paris, at least for now, the government announced a one-time €300 bonus to thank the police force for its hard work under exceptionally difficult circumstances. For five weekends in a row they had been on active riot duty, and a terrorist attack in Strasbourg (which claimed a fifth fatality this week) had put the entire force on highest alert. Many law-enforcement officers had been injured by hooligans who, a police spokesman said, were particularly aggressive and not just out for a stone-throwing fight with the police but prepared to kill them. Their exhaustion and disappointment at what they considered a "puny" bonus soon led to a pervasive disgruntlement and old grievances that gave birth to the gyros bleus movement (named after the whirling blue lights on top of police cars).

Police are not allowed to strike but they are represented by a number of unions. Encouraged by the government's response to the Gilets Jaunes who got most of what they wanted, three police unions called for a slow-down strike on December 19th, which caused long lines at the Paris airports' security gates and a number of symbolic closings of police stations with minimal service by a skeleton staff. The next day, some 100 police cars, their blue gyrophares flashing, drove down the Champs Elysées to reinforce their demands for better working conditions and salary increases, as well as payment of the €274 million in overtime pay that has been accumulating for a long time. After two days of negotiations, their demands were met and all law enforcement officers received salary increases of €120-150 per month, depending on their rank, while administrative and technical staff were awarded a one-time €300 bonus.

The enormous backlog of overtime covers dozens of years and grows by an average of three million hours per year, according to the Interior Minister, who agreed to meet as soon as next month with police union representatives to work out a payment calendar to begin clearing up this backlog. It looks like there won't be much of a Christmas break for those in this government who have to find the money for all these concessions. 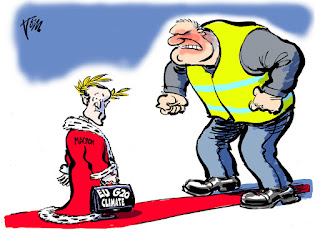 A happy end for now? Perhaps - but could other protests be far behind? President Macron's government does not seem to speak with one voice these days. On several occasions, Prime Minister Philippe has made an announcement that would be contradicted by Emmanuel Macron hours later, and Interior Minister Castaner has been "corrected" as well. Everybody seems stressed and overworked, and under pressure to solve current conflicts this month so as to begin with a clean slate in January. Cracks are beginning to show, but so is the lack of political experience in Emmanuel Macron's young government. Fingers crossed for next year. 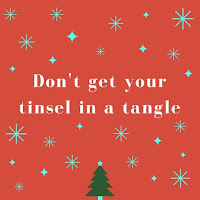 As we wait and see how all this is going to play out, let's relax and enjoy this moment of calm to turn to other matters. Such as food, the main subject in France at this time of the year, with many cooking programs on TV, and truffles, foie gras, game, fowl, marrons glacés, and exotic fruits taking pride of place in food shops. In Aix-en-Provence, the Christmas chalets are lined up along the Cours Mirabeau, and the popular Provençal nativity scene is there again with santons in traditional dress carrying offerings of lavender, olives, wheat or chickens as they descend from their hill-top villages on their way to baby Jesus in the stable. The crowds are out and the mood seems festive, even though the heavily armed soldiers on "Vigipirate" duty are a jarring presence.

As the last of the rubble in Paris has been cleared away, the graffiti scrubbed clean, and the shop windows freed from their protective boards, Peace on Earth may yet prevail this Christmas, at least for a while. Fingers crossed again. 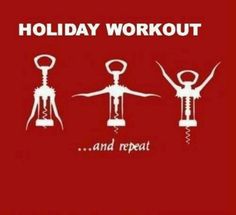 It's been quite a year, here as elsewhere. But things are rarely as bad as they look, so go ahead and enjoy the blessings of the season, including the abundance of food and drink that mark Christmas. Remember that New Year's resolutions exist for a reason, so make it worth your while before paying for it later, helped along by this handy Holiday Workout. 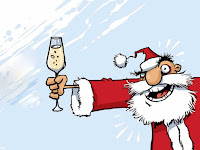 May you all have a very MERRY CHRISTMAS and a PEACEFUL NEW YEAR full of the promise of better times ahead.
Together with champagne Santa, I'll raise a glass to that.