NEW YEAR, NEW HOPE? NOT QUITE YET

The start of a new year comes with the usual personal resolutions and wishes for peace and prosperity to all. This time in France, those wishes included an end of the Yellow Vest demonstrations that have been taking place every Saturday since mid-November 2018 and have won the protesters major concessions from the government at a total estimated cost of €4 billion in actual damage to public property and lost business. (Example: fully two-thirds of all roadside radars in France were vandalized during the demonstrations, with replacement costs varying from €60,000 to €200,000 a piece). At the peak of the destructive protests in December, President Macron went on national television and, recognizing the legitimate concern of the lower middle class for their loss of purchasing power, he granted €10 billion worth of increased wages and tax breaks to low-wage earners and small pensioners, and cancelled the planned fuel tax increase that had set off the Yellow Vest protests on Facebook.


Against expectations, and despite the Yellow Vests' success in obtaining redress, their movement did not die down but has shifted into a harder core of holdouts, who now seem focused on bringing down the Macron government. The agitators' heated rhetoric, the anti-Macron placards, and the inevitable infiltration of "casseurs" (thugs) in the protest marches, have led to attacks on the Arc de Triomphe and on the Ministry of Communications in Paris where protesters drove a piece of heavy construction equipment through the locked gates and entered into the courtyard, where they began breaking windows as police quickly evacuated Government Spokesman Benjamin Griveaux from his office. Elsewhere, protesters had set fire to the préfecture de police in Puy-en-Velay and attacked a gendarmerie in Dijon. The Gilets Jaunes (GJ) movement, which sprang from a widely shared concern over lost purchasing power due to over-taxation, has come to resemble a protest against all government authority and the symbols that represent it, including the police. It still is a leaderless movement without party affiliation, but also without a clear purpose now that its main demands have been met. 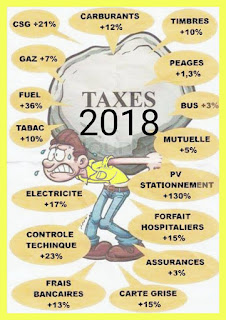 In his conciliatory speech in mid December, a visibly uncomfortable President Macron tried to calm the waters by cancelling the hated fuel tax increase and meeting most of the protesters' demands. Two weeks later in his New Year's address to the nation he took a firmer line as he called for order to be restored and outlined his plans for implementing his proposed reforms, including pension reform and a tightening of unemployment rules − a delicate task in the current climate. He also invited all citizens to participate in a National Debate, organized in town halls across France between January 15 and March 15, where people can express their concerns and suggestions in a Register of Grievances which would then be transmitted to the government in Paris and acted on this spring. A gesture toward those who have felt neglected and "unheard" by this Administration and, in the words of Prime Minister Philippe, a chance at "building together the France of Tomorrow." 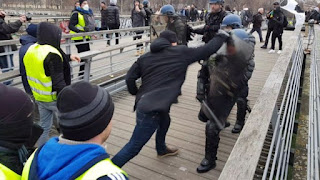 And yet... in Act VIII of the GJ's January 5 protest in Paris, the demonstrations deteriorated again into chaos and vandalism, but also with acts of extreme violence against the riot police. When the marchers deviated from the designated route and started crossing a bridge that leads to the National Assembly, police tried to stop them but were attacked by a mob that included an ex-professional heavyweight boxer who was filmed punching a policeman into retreat and kicking another one while he was down. Scenes of violence also occurred in Toulon, Calais and Rouen. Clearly, the president's attempts at appeasement were not working.

As more facts and figures are coming out, the collateral cost of this uprising is cause for alarm: to date, more than 43,000 claims have been filed for full or partial unemployment benefits following temporary or permanent business closures. Among those closures are family businesses such as small trucking companies that have not been able to deliver due to weeks of road blockages and toll closings, or shop owners who have lost most of their Christmas sales that represent 20-30 percent of their annual income. One may wonder if the GJ were aware of how much their actions would hurt those they claim to represent.

Loss of confidence is another problem: The country's business outlook fell in December to the lowest point since November 2016 and new orders declined for the first time in 34 months, contrasting sharply with the strong growth recorded throughout 2018, according to IHS Markit. 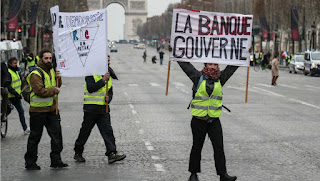 In a televised response on January 7, Prime Minister Edouard Philippe announced that, while upholding the right to demonstrate, the government would no longer allow unsanctioned protest marches; all masks or other face coverings would be prohibited at future demonstrations; a police file would be set up of identified casseurs who would be banned from future protests and also be held accountable for the damage they caused (casseurs payeurs). Where their violent acts used to be punished with a fine, these would henceforth be treated as a criminal offence. Laudable as this proposed new law (to be voted on in early February) may be, it seems timid in the context of today's inflamed mood and the obvious disregard for the rules of civil society, as evidenced by the GJ reactions on Facebook and Twitter and their unflagging determination to keep demonstrating. A nervous government decided to deploy 80,000 riot police throughout France for Act IX on Saturday, January 12. It paid off when 84,000 protesters showed up (vs. 50,000 the week before), mostly in Bourges, a historic city in the center of France, and in Paris, but no serious incidents were reported. On the other hand, the GJ are considering a change of tactics and called on their followers to massively withdraw their money from the "banks that really run this country" − i.e. a bank run. Even though economists don't believe this will do serious damage to the banking system, it is further proof of the hardening of the GJ movement. 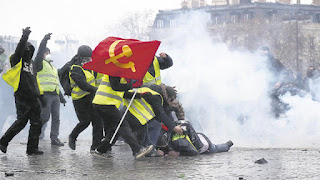 President Macron's generous response in December may have been interpreted as weakness of a president in trouble, who is now hostage to the success of a faceless movement that has tapped into that well of discontent that seems an integral part of the French soul. Has the lid come off Pandora's box? It seems unlikely that this crisis will pass without more demands for one thing or another by a variety of people who have had legitimate claims for years, such as nurses or teachers, who may feel encouraged to press their own charges now. And in the meantime, the GJ's original protest against the fuel tax has evolved into a nebulous demand for "a better life" and the resignation of President Macron. 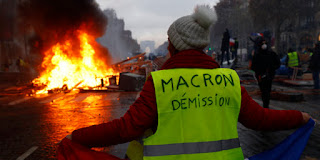 In changing course and canceling his fuel tax Macron had sought to stop the violence of this leaderless, unknown quantity called Gilets Jaunes by choosing the slippery slope of concessions. It did not stop the violence and with the growing loss of confidence in his government it is as yet hard to see where this will end. According to a January 9 Elabe poll for BFMTV, 60% of French people still support the GJ today. In a letter to the French people to be published next Tuesday, Macron will try to diffuse the tension and reassure the country, but the radicalized GJ are unlikely to stop demonstrating and may force Macron into repressing their movement or negotiating with it. Now more than ever, it would be good to see some senior, seasoned politicians among the young technocrats of Emmanuel Macron's government.

Awaiting further developments, Macron has cancelled his attendance at the World Economic Forum on January 22-25 in Davos due to his "busy agenda" (a more elegant explanation than President Trump's cancellation due to "the Democrats' intransigence").

Clearly, Macron is facing some serious obstacles at home today, but also on the European front where Italy's joint vice-presidents of the extreme right and left, Matteo Salvini and Luigi di Maio, have given their enthusiastic and public endorsement to the Gilets Jaunes and encouraged them to fight on. Add to that the unresolved Brexit problem, the growing nationalism in Eastern Europe as well as a newly formed extreme-right, Europhobic party in Spain, and Macron's plans for reforming France and strengthening the European Union seem a fading dream today. What started with such promise less than two years ago − a young president with a project to reform an entrenched, tradition-bound and rules-hampered government − may be undone by a Facebook-fueled wave of insurrection that could be a throwback to the 1968 student rebellion that ultimately led to the resignation of Charles de Gaulle.

May wisdom inform our rulers and preserve peace in this complicated but democratic society with its history of revolutions from which today's laws and freedoms have sprung.
That is my New Year's wish. 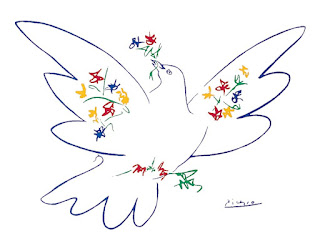