AUGUST NOT THE USUAL SNOOZE; CRISIS IN ITALY; G7 AT BIARRITZ

For a good part of this month I was absent from France and only occasionally checked the press for home-front news, finding nothing of interest. It confirmed that August in France is shutdown time, when the government is in recess for at least three weeks, the general population likewise absent, and demonstrators hold off their next action until September when people are back to work and their lives can be disrupted again by traffic shutdowns and strikes. No point in agitating when nobody is there to see you.

The same cannot be said for Italy, where the entire Senate was called back from vacation to deal with a crisis sparked by deputy Prime Minister Matteo Salvini of the hard-right populist League party who filed a motion of No Confidence against his fellow deputy Prime Minister and coalition partner Luigi di Maio of the anti-establishment Five Star movement. On August 14, the hurriedly called Parliament decided to delay the timing of this proposed No Confidence vote until August 20, allowing some time for reflection. On August 20, however, Prime Minister Giuseppe Conte effectively muted the motion of No Confidence by resigning after a sharp rebuttal of Salvini’s “irresponsible and dangerous agitation that could lead Italy into a spiral of political and economic instability.” It is now up to President Sergio Mattarella to try and form a new government or call for a snap election. In the meantime, Conte will head a caretaker administration.

Salvini would become Prime Minister if he were to win an early snap election, but his coalition partner Di Maio wants to pass the proposed Senate Reform bill (reducing the number of parliamentarians by one third) as well as the 2020 budget before a change of government. Italy is facing rising tension in the European Union over its public debt that exceeds the EU limits, and must come to an agreement on the budget before year-end.

The Salvini-Di Maio coalition was a poor match from the start, where Salvini’s Trumpean style soon overshadowed Di Maio, most notably in his rigid anti-immigrant policy, his Euroscepticism, reckless spending, and close ties to the likes of Putin, France’s Marine Le Pen, and Steve Bannon, the American mastermind behind Trump’s election. His far-right party is currently riding a wave of popularity for his anti-immigrant stance, his refusal (as Interior Minister) to allow humanitarian ships to dock at the island of Lampedusa, and punishing those who try to rescue refugees at sea.

Latest case in point – the Spanish rescue ship Open Arms, with more than 100 refugees on board, had roamed the Mediterranean waters for 20 days with increasingly desperate conditions on board, having been rejected from various ports, before it dropped anchor just off the island of Lampedusa to evacuate more than a dozen people for urgent medical care. During that time Spain deliberated about the best reception point and promised to send a navy vessel to meet the Open Arms and offload the refugees – a round trip of six days that some might not survive. Italian public prosecutor Luigi Patronaggio then decided to personally inspect the conditions on board, declared them “explosive and critical” and, overruling Salvini’s decree of non-admission, allowed the ship to dock in Lampedusa and disembark its refugees.

This setback for Salvini occurred on the very day that Giuseppe Conte resigned as prime minister, and Italy entered a time of uncertainty as its president urged the various parties to agree on a new coalition by next Thursday to avoid a snap election in October. Polls indicate that such a snap election would be won by Salvini, with potentially serious consequences for Italy’s democracy and for an already frayed European Union.

As the Italian drama unfolded, France began to wake from its summer siesta and President Macron went into high gear to receive no less than three heads of State in one week. He welcomed President Putin at the Fort de Brégançon, the presidential summer residence on the French Riviera, for an informal get-together prior to the G7 meeting in Biarritz on August 24-26 from which Russia has been excluded since its take-over of Crimea in 2014. They reportedly covered a wide range of subjects, but we can be sure that one of them was Russia’s desire to reintegrate the G7 (returning it to G8). Within the next few days, Macron received Boris Johnson at the Elysée Palace to discuss his planned “Brexit on 31 October come what may” and Indian Prime Minister Narendra Modi at the Chateau de Chantilly for further discussions initiated earlier in India on bilateral issues of interest and the Franco-Indian strategic partnership.

And then it was off to Biarritz in the southwest of France, where Macron would be hosting this year’s G7 meeting. This is an informal meeting of the seven most industrialized democracies in the world: the U.S., Canada, Japan, France, Germany, Italy and the UK, to discuss the important issues of the day and try to find common solutions. Last year’s G7 was held in Canada and ended on a negative note when Donald Trump refused to sign the final communiqué, and even before he left for Biarritz last week Trump made it clear that he considered these G7 meetings a waste of his time.

Wisely, Macron decided that this year there would be no written communiqué but a press conference to briefly resume the subjects of discussion and the results achieved. And thanks to Macron’s masterful management of the event, and his pragmatic “try to keep Trump happy” line of conduct, a satisfied Donald Trump declared in his press conference that this G7 had been very successful and productive, with “the best exchange I have ever had,” referring to the 2-hour luncheon with Macron, without staff or interpreters, which is Trump’s favorite way of negotiating.


Agenda:  The out-of-control fires in the Amazonian rainforest pushed Climate Change and the need for an immediate and coordinated international response to the top of the agenda. This issue was given added urgency when President Macron threatened to withhold ratification of the recently negotiated free-trade agreement between the EU and the Mercosur countries (Brazil, Uruguay, Paraguay and Argentina) if Brazilian president Jair Bolsonaro does not take immediate action to protect the Amazon rainforest.
Other items on the agenda were Iran, the US-China trade war, taxation of GAFA (Google, Amazon, Facebook, Apple) sales in France, gender equality, and more.


But the most memorable part of this G7 meeting did not appear on the agenda. It was Macron’s master stroke of inviting Iran’s Minister of Foreign Affairs, Mohammad Javad Zarif, who arrived as a surprise guest on Sunday afternoon to sit down with his French counterpart, Jean-Yves Le Drian. They would try to diffuse the US-Iran blockage by allowing Iran to export some of its oil in exchange for a guarantee that Iran would not produce nuclear weapons or ballistic missiles. To formalize this arrangement, Donald Trump would meet with president Hassan Rohani “when the conditions for such a meeting are in place,” which following this first encounter in Biarritz might happen in the coming weeks, said Macron. It was a major diplomatic coup on Macron’s part.

What results?
•  On Climate Change. No progress on Climate Change (the U.S. did not attend this session). However, the G7 countries agreed to send €20 million in aid in the form of Canadair planes to fight the Amazon fires, as well as immediate French military support for this effort. They also agreed on further financial aid for reforestation at a later date, to be submitted in detail to the UN Assembly in late September. (Bolsonaro haughtily rejected this aid stating that Brazil was nobody’s colony, before he changed his mind the next day).

•  The GAFA tax issue was set for resolution in 2020 when an agreement would be worked out with the OECD on international taxation of the GAFA companies.

•  As for the US-China trade war, president Trump stated that he felt that China “would soon want to come to an agreement because it could not hold out much longer.” This remains to be seen.

•  No change, but a new ray of hope, on the US-Iran standoff, where Trump expressed the same view: that Iran will come to the table sooner or later because the sanctions are working. The dangerous tensions in the area are such, however, that a speedy resolution would be welcomed by the entire world, and the positive meeting between the Iranian and French foreign ministers in Biarritz may well contribute to such an outcome.

Overall rather slim pickings, perhaps, but Macron’s defense of these G7 meetings is that they take place in conditions that allow a great deal of direct personal contact as well as side meetings with back-up specialists. This can be more effective and produce quicker results than larger, more formal gatherings, and he considers Biarritz a good example. 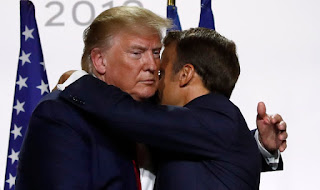 Most visibly, the Trump-Macron bromance (real or faked) is alive and well again, complete with accolades, back slaps, arm squeezes and mutual compliments. Macron, who spoke first, briefly listed the main points of the meeting and their progress or lack thereof, giving the event a positive spin overall. He is a good, natural speaker and handles the press well, without straying from the subject in question. After about 12 minutes, he opened the floor to two questions addressed to each president. Once these were answered at length, Macron withdrew and left president Trump to his own press conference which stood in cruelly stark contrast to Macron’s style and contained its usual share of slurs and lies.

Trump repeatedly blamed president Obama for making terrible and stupid deals (Iran, China, and others) and being outsmarted by Putin. He feels that Putin should be allowed to rejoin the G7 and when someone reminded him that Russia was excluded because it annexed Crimea, his answer was “that was under president Obama” and “that could have been stopped with the right whatever.”

His views on climate change: “I am an environmentalist. I probably know more about the environment than anyone else and have done more environmental impact statements than any other president.” Nevertheless, he gutted the Environmental Protection Agency, reduced its budget by 31 percent, and rolled back many Obama-era safety rules and restrictions. 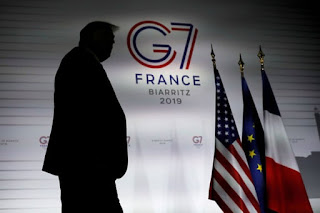 He rambled on for close to 50 minutes, spreading blame and compliments where he saw fit (“Boris Johnson will be a great prime minister”) and often getting off-track with interjections like “.. and by the way I can say the same (compliment) of North Korean president Kim Jong Un; I know him very well and like him, and so does the First Lady.” Melania never met him.

When a reporter asked if he stood to make a lot of money on hosting next year’s G7 in Miami at one of his own golf clubs, he replied “I don’t care about money. I only do what is right for the country” and then launched into a lengthy promotion of his golf club with its various bungalows (one for each country), large grounds (for parking), proximity to the airport, etc. He also mentioned in passing that the presidency will cost him about 3 to 5 billion dollars over five years in lost income and opportunities. “I used to make (well paid) speeches all the time; now I get zilch for my speeches but that’s alright because I do it for the country.” 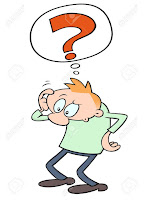 What can we say?

Both Macron and Trump are first-time presidents, but only one of them is a statesman.