As I sit here writing this blog in sweltering heat, it is dawning on me that this is a new pattern and that heatwaves are becoming a regular part of our summers. Apart from a certain amount of discomfort for those of us without air-conditioning (which we cope with in various ways), this year we reached extreme temperatures in June, earlier than usual, which gives us reason to worry about future summers.

Air-conditioned houses and public buildings are still the exception rather than the rule in much of France, which calls for special measures when temperatures soar to the levels of 40 to 45°C (104 to 114.6°F) that we have been experiencing, such as:
-    End-of-year school exams had to be postponed for lack of air-conditioning
-    Many nursery and kindergarten schools closed earlier for the summer
-    Numerous trains were delayed or canceled due to dilating rails or overhead lines that lose their tension when overheated...

and we, city dwellers without air-conditioning, go into summer mode, which may include daily matinee movies in air-conditioned theatres and visits to the deep-freeze section at the closest Monoprix. For retirees like us it’s a temporary adjustment in our lifestyle, but American visitors will miss their omni-present air-conditioning and heaps of ice in their drinks.

I suspect that some of the American speakers at the economic forum in Aix-en-Provence this past week had a hard time in the non-airconditioned setting of the Economics faculty of the University of Aix-Marseille, where many in the audience used their program to fan themselves and Nadia Calviño, Spanish Minister of Economics, whipped out her very own fan on the speakers’ dais of the packed auditorium. Assuming their bodies are no different from ours, there likely was not a dry shirt among them.

Summer festivals in the south have always faced weather-related challenges, but most of them are managing the heatwave rather well. The opera festival in Aix is a full house event as usual, but the theatre festival in Avignon may experience a slight drop in attendance at its daytime OFF program for want of air-conditioning. This year is another record-breaker with more than 1500 OFF (daytime) plays all over town in sometimes makeshift and usually hot theatres. 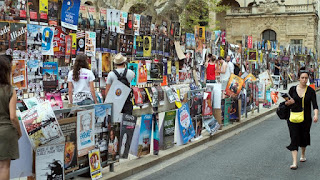 Yet, these OFF productions, often try-outs for young actors and playwrights and lasting no more than one hour each, find their own faithful public that will let no heatwave keep them away from this shrine of the theatre arts. It’s all jolly good fun and a counterweight to the more serious tenor of the IN plays in the evening, which can last as long as eight hours and always take place in air-conditioned theatres, except for the large open-air Cour d'Honneur at the Popes' Palace. [Note: The Obama family who vacationed in Avignon this year, left just before the heatwave hit.]

The heatwave did not interfere with the month-long Women’s World Cup soccer matches in France, which saw an admirable American team take home their fourth World Cup trophy after beating the Dutch team in the finals in Lyon. These matches have been played to sell-out crowds and proved every bit as exciting as men’s soccer. They were extensively covered in the press (not only sports journals) and the televised matches broke records for audience ratings. Suddenly women’s football (as it is called in Europe) has won legitimacy in the male-dominated sport, and is bound to result in improved or equal pay for women players compared with their male colleagues. Strike one for the girls! 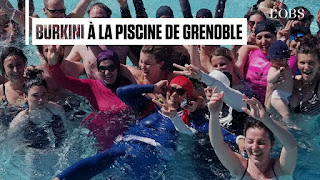 Every heatwave seems to bring out the best and worst behaviors. This year, my prize for worst behavior goes to the City of Grenoble which decided at the height of the current heatwave to close the two municipal pools in town because some women had come to swim in a burkini, the one-piece neck to ankle swimsuit used by Muslim women when in public. Similar incidents had occurred on several public beaches in 2016 after police in Cannes forced an Arab woman to take off her burkini or leave the beach because she “scared” the locals. Granted, these incidents happened after the terrible carnage in Nice when an Islamist terrorist ran his heavy truck through a crowd of Bastille Day celebrants on the Promenade des Anglais, killing 86 people and wounding more than 200. But even then, the arguments against burkinis on public beaches were mostly driven by discrimination and political opportunism.
(see blog August 2016) 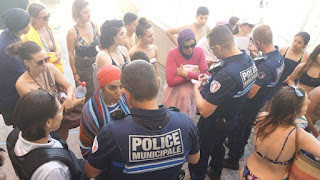 After three Muslim women in Grenoble found themselves barred from the municipal swimming pool, they returned days later to challenge the local rule and claim the right to use municipal services like their fellow citizens. This time they were ten – seven Muslim women accompanied by three activists from Alliance Citoyenne – to “invade” the two pools wearing their burkinis.

They were fined €35 each for breaking the local ordinance, but their gesture gained notoriety and many supporters.

The rule, as it turns out, is based on the mayor’s interpretation of what’s best for his citizens from the standpoint of security, hygiene, and laïcité (secularism). It is hard to argue that a full-body bathing outfit would endanger fellow bathers, or that a burkini would be less hygienic than, say, swim trunks for men, and bikinis or the barely-there string for women.

In 2004 France banned the wearing of headscarves as part of a law against “ostentatious religious symbols in public schools” and in 2011 a new law prohibited all forms of face covering, such as veils and masks, in public places. Obviously, these do not apply to the Grenoble incident. 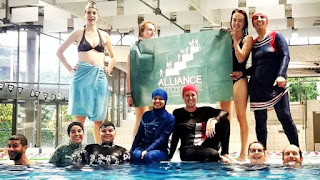 The Alliance Citoyenne (a citizens’ group that comes to the aid of fellow citizens in cases of discrimination or denial of rights) maintains that the burkini issue is not one of religion but of culture, and is protected by the freedom of speech and choice of dress, while the Observatoire de la Laïcité, in its guidelines to sports clubs, points out that club managers can only ban the burkini for security and health reasons, not on the basis of religion. Furthermore, one may well ask why in secular France nuns’ habits worn in public should be more acceptable than burkinis? And how seriously do we take French laïcité when this country celebrates at least five Catholic events (outside Christmas) with a national holiday?

And yet, many local and national politicians still object to the burkini for self-serving reasons, so to put an end to the controversy the mayor of Grenoble has reopened the pools but referred the matter to President Macron for a clear definition of the law on burkinis. “All politics are local” as the late Tip O’Neill said. Look no further than small French towns where those who are “not from here” are eyed with suspicion, whether French or foreign. This is also true for picturesque villages where affluent outsiders have bought second homes but where we found that the old locals seem to reserve their strongest distaste for Parisians over all others. In their mind, Parisians are “the worst foreigners”.

Finally, the Grenoble incident is just one more example of how divided France remains on the issue of immigration, even when most of its immigrants come from former French colonies in Africa, especially the Muslim countries of the Maghreb, and speak French. Many of these people are herded into purpose-built cités of high-rise towers on the outskirts of Paris where high unemployment, poverty and petty crime thrive. This is fertile territory for Islamist extremists who prey on the jobless young men as potential recruits for their jihad. Several of the 2015 terrorist attacks in France were committed by French-born young men who were radicalized in these immigrant ghettos or in jail. But even today, the French government is doing little or nothing to integrate this immigrant population into the wider French society and facilitate its access to the job market, as countries like the UK, Germany, The Netherlands and others have done. (see blog February 2017)


And then it was Bastille Day, France’s national holiday on the 14th of July which, malgré moi, fills me with pride for my adopted country. The meticulously choreographed parade down the Champs Elysées is always impressive for its show of military might but especially for the incredible setting. From the Arc de Triomphe, dedicated to Napoleon’s victory at Austerlitz, to the Luxor obelisk, gift from Egypt to France in 1829, the march down the wide Champs Elysées to the Place de la Concorde has no equal in the world for conveying a sense of grandeur.

This year President Macron made a point of showcasing European military defense cooperation, with vehicles, aircraft and forces from nine European countries in addition to France. It was a mighty display of joint power on land, at sea and in the air, witnessed by key European leaders, including Angela Merkel. As Macron explained, a joint European defense force is more important than ever at this time of high tension in the Gulf and deteriorating relations with the US, and would give Europe greater autonomy in case of war.


Another benefit of all this show of strength is the effect it has on those who are still struggling to come to terms with France’s decline on the world stage. Since its heyday of the Enlightenment in the 18th century and its dominant role as a cultural, political and military power, when the French language was spoken at all European courts and it brought refinement to the world, the decline has been steady and painful. This airbrushed view of their past grandeur is at the heart of a certain French arrogance that, even today, gives them a sense of superiority that views other people, and especially immigrants, with a certain disdain.

Clearly, this Bastille Day parade is a boost to their morale and reminds them of France’s importance. It is also one of the rare moments of shared French pride, when they stop complaining – at least for a day. 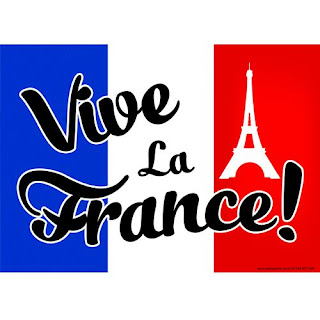 Posted by Anne-Marie Simons at 1:11 AM