September started with a bang, promising plenty of sound and fury in the coming weeks of protest against President Macron’s announced Pension Reform program which seeks to unify the current 42 different pension schemes into a single points-based pension system for all with full retirement at age 64, effective in 2025. The current retirement age is 62, one of the lowest among OECD countries, with some of those with “special regimes” retiring as early as age 50. Macron proposes a system where “a one-euro contribution buys the same pension rights, whenever it was paid and whatever the status of the person”. 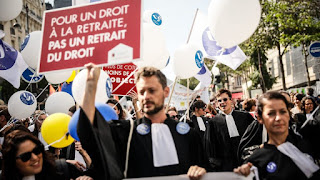 The need to reform the French pension system with its multiplicity of rules and rights and retirement ages is generally accepted, but the labor unions, who were largely ignored in Macron’s first year as president when he overhauled the complicated Labor Code and pushed through employment reforms by decree, will not be sidelined this time and intend to have their say in the negotiations. Two left-wing unions, the FO and the CGT, immediately called for strikes by transport workers, resulting in Black Friday on 9/13 when public transportation in and around Paris (train, Metro, tram and bus) came to a virtual standstill. A few days later, French doctors, lawyers and pilots marched in Paris in protest against this reform which, they claim, will cost them more in contributions and force them to work longer. And they are just the first of many others who are preparing to strike. [Since private pension plans are rare in France, most workers are enrolled in compulsory state-backed plans.]

Another reason for pension reform is the fact that the current system is unsustainable, especially in the public transportation sector with its “special retirement regimes” that incur a chronic loss of 5.5 billion euros every year, plugged by taxpayers’ money.

RETURN OF THE GILETS JAUNES


Nevertheless, the government will face many obstacles, not the least of which will be the Gilets Jaunes (Yellow Vest) protesters who managed to stall Macron’s reforms agenda for nearly a year and who – with exquisite timing – came back on the scene for their 45th demonstration on Saturday, 9/21, the day of a peaceful Climate March in Paris and cities worldwide. Unfortunately, and predictably, they were joined by their new best friends, the dreaded Black Bloc anarchists who quickly turned to violence, breaking windows and setting fires as they attempted to infiltrate the Paris Climate March, which broke up as people fled when police tried to push back the black blocs with tear gas.

Even though more than 160 violent protesters were arrested, the Climate marchers and the National Heritage Day visitors to buildings that are normally closed to the public lost out to those who seem unable to make their message heard without violence to people and property. A sad sign of the times.

This trouble came on the heels of the successful G7 meeting in Biarritz, where Emmanuel Macron reinforced his image of Europe’s de facto leader and adroit negotiator. He will need all his skills for the upcoming battles at home as he tries to pass his proposed reforms and keep Paris from burning. 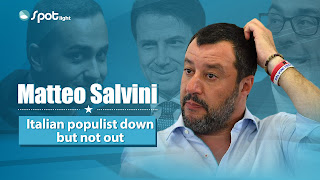 After the ouster of the extreme-right leader Matteo Salvini in Italy last month, the new Italian government of Prime Minister Giuseppe Conte and his new Foreign Minister Luigi Di Maio announced that NGO rescue ships with migrants fleeing dangerous Libyan detention camps can again dock at Lampedusa island. On September 23rd five EU ministers met in Malta and agreed to a tentative, voluntary scheme of allowing these migrants to disembark in their ports, on a rotating basis, where they will be checked as legitimate asylum seekers and redistributed across Europe. They represented France, Germany, Italy, Finland and Malta, with the prospect of five other countries joining later. This draft agreement needs to be endorsed at a full meeting of the EU Interior and Justice ministers next month.

At this stage it is only a Draft Agreement and asks for the voluntary commitment of host countries, but it is a first step toward a solution of the untenable situation in the Mediterranean where too many migrants are still drowning as they flee on unseaworthy inflatable rafts (968 so far this year according to the International Organization for Migration), and those lucky enough to be rescued are often rejected by countries who don’t want them. It was time to formalize the earlier loose arrangements, and bring local laws in accordance with international maritime law. As Carola Rackete, captain of the Norwegian-flagged Sea Watch 3 rescue ship, stated after forcing her way into the Lampedusa port with 44 exhausted refugees on board and was arrested and briefly jailed for it: “I broke a local law in order to obey an international one,” referring to the universal maritime rule that a captain is obliged to rescue those in peril at sea. The problem is a complex one and requires a binding solution which, after years of squabbling, should not be beyond reach.

At last Monday’s UN Climate Action Summit in New York, the most famous and perhaps most widely admired speaker was 16-year-old Greta Thunberg, the diminutive Swedish climate activist who, addressing herself directly to the world leaders and policy-makers in attendance, criticized them for their inaction in the face of a potentially catastrophic climate crisis and with blistering frankness accused them of betraying the young people of the world. You have stolen my childhood and that of millions of others, she said, and we will not let you get away with it. “How dare you!” her voice rang out to the 60 national representatives in front of her, as her anger visibly mounted and nearly brought her to tears. “Right here, right now, is where we draw the line!” Strong words, indeed, perhaps because Thunberg had indicated earlier that she did not expect much from this climate summit which was boycotted by major polluters Brazil and the US. As the speeches droned on that day, her fear was borne out when it became clear that nobody brought anything new to the table and those who did (Germany) had disappointingly late target dates (2038 to phase out coal mining). None of this will allow to hold down the global temperature rise to 2°C above the pre-industrial levels, as projected in the 2015 Paris Agreement.

Not surprisingly, Greta’s ideas resonate most strongly with young people who are now massively school-striking every Friday afternoon, and with those adults who marched in unprecedented numbers around the world this past Saturday, demanding government action.

In just one year’s time Thunberg has become the poster child for climate activism, who managed to channel her Asperger syndrome and nightmare-causing anxieties about global warming into a near-obsessional mission to alert others to the urgent need to reduce our carbon emissions and stop the rapid disintegration of our environment, including the extinction of 200 animal species every day.

In the course of her growing activism, she has gained admirers and detractors, but nothing has slowed her down so far. She has spoken at the World Economic Forum in Davos, at the UN’s COP-24 climate talks in Poland, and before the British Parliament. She seems remarkably resilient to the vile attacks on her person and her appearance, mostly on social media, but never fails to repeat her mantra of “Follow the Science!” to the unbelievers.

In the French press and political circles she has not been treated kindly. The most frequent criticism is that she is a “mere child,” not to be taken seriously: “We take no lessons from a 16-yr old; she is manipulated by her parents; she is mentally disturbed; she is too young to have an informed opinion; who is paying her?” In their rush to condemnation, they must not have heard her message: Follow the Science! And how to explain that this “child” has singlehandedly sparked a worldwide movement for climate action, has managed to put climate change at the top of the international agenda, to inspire high-schoolers all over the world to skip classes on Friday afternoons, and to spearhead the biggest ever Climate March worldwide last Saturday – all without breaking a single window or setting a single fire? 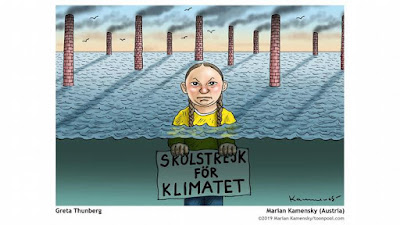 To those who point to her Asperger’s as a disqualifier, I would point to Greta’s own response: I am sometimes different from others but I see my difference as a strength. It is indeed likely that this difference makes her so determined, maniacal if you will, in the pursuit of her goal despite the personal sacrifices (not to mention the attacks and insults) that come with it. I would ask the sceptics: Where is the risk in believing her? Like President Trump’s followers, there is probably no way to convince the disbelievers. But as long as young Greta keeps on message and continues to call out those who fail us, she deserves our full support and gratitude. She has shown courage, maturity and leadership in an uneven battle against the inertia of our lead-footed leaders. I, for one, do not see a more effective and articulate spokesperson for a cause that is of vital concern to us all: the very survival of our livable planet.

As for her youth: Joan of Arc led an army to victory against the British at age 18, and Malala Yousafzai was awarded the Nobel Peace Prize at age 17.  But never mind that.

Posted by Anne-Marie Simons at 1:30 PM