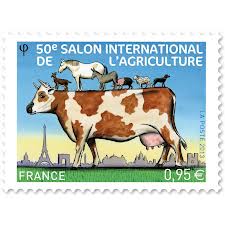 On February 23rd, the annual Salon International de l'Agriculture opened in Paris for the 50th time. This may not seem important to you, but in France this Salon is eagerly awaited and the event is given top billing by all news media. Even though France's economy is stagnant, the country is involved in a nasty war in Mali, and the European Commission has just issued a very bleak economic forecast, the Salon de l'Agriculture displaced all this with happy pictures of First Visitor François Hollande arriving at 7:00 AM this Sunday, an hour before the official opening when the farmers were still milking their cows. He then spent most of the day at the giant Salon, talking to farmers and breeders, eating and drinking the offerings (including a glass of milk straight from the cow - in front of television cameras), petting prize animals, asking questions, and defending his policies. 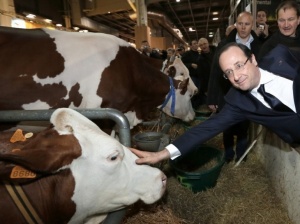 The farmers, who are traditionally of the right, showed no great warmth for this socialist president but did recognize that at the recent European Budget Meeting in Brussels, where David Cameron was victorious and most everybody else lost, François Hollande had managed to safeguard the disputed French farm subsidies for the next seven years. This Salon, which draws 700,000 visitors and more television coverage than the French Open or the Paris fashion shows, is a sine qua non for any French president and particularly one who is still fighting a rather low approval rating.

After ten days of fierce debate the Gay Marriage bill was adopted by the General Assembly on February 12th. Split largely along party lines, the left outvoted the right on this issue. The legislation now moves to the Senate where the Socialist-led coalition holds a majority and where the Bill is expected to pass and be signed into law.

At this time of the year − staggered between mid-February and mid-March for schools from different regions − French schoolchildren have two weeks off for winter holidays, causing a massive exodus to the mountains. The ski resorts see a constant stream of arrivals and departures on weekends, and highway traffic is correspondingly dense and classified as weekend rouge or noir at those times, meaning traffic backups and long lines at toll stations. Despite the current economic difficulties French ski resorts have seen no drop in attendance and most are fully booked, perhaps helped by the fact that most of France has had more rain so far this year and fewer hours of sunshine than in past years. Fortunately, abundant snowfall in the mountains and crisp blue skies await the hordes of pale-faced city kids who have been cooped up too long and are in need of "airing".

In its just-released 2013 edition, the Michelin Guide gave a new young chef its top award of three stars. Arnaud Donckele of La Vague d'Or in Saint Tropez, the only new 3-star restaurant this year, was recognized for the authenticity and excellence of his "cuisine du terroir" of Mediterranean and Provençal products. At only 35 years of age, he is today the youngest member of the elite club of twenty-seven 3-star chefs in France.

The 2013 Guide announces five new 2-star restaurants and 39 new 1-star ratings, as well as several "demotions" of restaurants that lost one or more stars. Overall, the Guide notes a timid return of some traditional "saucy" dishes that had been displaced by the lean cuisine of recent years, an emphasis on regional specialties and locally-grown products, and an increasing number of starred restaurants that offer an "under €20 Euro" menu to price-conscious gourmets.

Even though the famous Guide Michelin has been accused of being French-biased when judging restaurants in foreign countries, it is still considered the most important food critic in France, with an undeniable influence on the commercial success or failure of a restaurant.

Who would have thought that the DSK soap opera would still be running in 2013?  Yet, here we go again with a new blast in the press, both French and foreign, about DSK's sex life. The French weekly Le Nouvel Observateur in a cover story of its 2/21/13 issue published excerpts from Belle et Bête, to be released later this month, wherein Argentine-born Marcela Iacub relates her seven-month-long affair with DSK between January and August of last year. Iacub is a Buenos Aires-educated lawyer who lives in Paris today where she is a researcher for the prestigious CNRS and writes an occasional column for Libération. In Beauty and Beast she never mentions Strauss-Kahn by name but told Le Nouvel Observateur in an interview that the man she describes as "half man half pig" is DSK, adding that she admires the pig. "All that is creative, artistic and beautiful in Dominique Strauss-Kahn comes from the pig, not the man", she says. "The man is horrible, the pig is wonderful."

In an essay she wrote in January 2012 Iacub defended DSK and lashed out at radical feminists who practiced "punitive feminism". Followed seven months of an amorous relationship, which today she calls "field work" that served to write the book in which she attacks not only DSK but also Anne Sinclair, his separated wife, who according to Iacub dreamed of being a presidential spouse and treated DSK like a poodle who had become dependent on Sinclair's wealth. 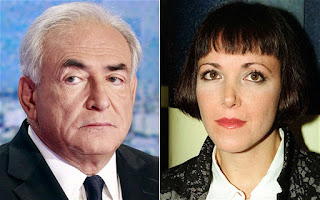 In a letter to the founder of the magazine, DSK says he is doubly disgusted, first by "the behavior of a woman who uses seduction to write a book, pretending amorous feelings only to exploit them for financial gain" and also by the nauseating actions of the magazine that stooped to publish "this abomination". Anne Sinclair, for her part, wrote a letter stating that Iacub's account of their conversation is "false and fallacious" and a "slanderous and delusional interpretation of my thoughts". In that conversation, Sinclair is quoted as saying about the Sofitel incident in New York: "There is no wrong in getting a blow job by a maid". Both Strauss-Kahn and Sinclair promise legal action.

In response to accusations of sensationalism and gutter journalism, Laurent Joffin of Le Nouvel Observateur said: "We consider Belle et Bête a good book and it is our role to write about good books". 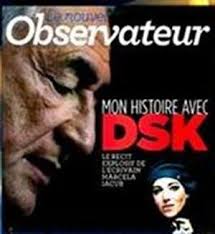 Even before its release date of February 27th, the book has already caused a wave of criticism in the French press, and the Argentine daily Pagina 12 calls this "so-called study" an example of puterio intelectual moderno (modern-day intellectual prostitution). Whether from the right or the left, all publications decry Iacub's underhanded tactics and unethical behavior, but she has her defenders among some of the French "intellectuals" and, of course, from the book editor of Le Nouvel Observateur who calls Belle et Bête "a literary work of stupefying power in the tradition of Kafka's Metamorphosis". Yes, he really did say that.

Three days after the controversial article appeared, the polemic is still growing and on 2/23 the respected daily Le Monde went so far as to pull the alarm bell and call for a strong response from the French press against the pauperization of content where vulgarity, public lynching and profit will drive publishing. Unless we react, Le Monde says, this book will sign the death warrant of news publishing and turn it into a mere paper seller or e-book tout. A long list of "names" signed this article.


(*) To read more about the Salon de l'Agriculture in my book Taking Root in Provence click here:

Posted by Anne-Marie Simons at 6:26 AM