A PRESIDENT SHOULD NOT SAY THAT… but he did

Now that the noise around Donald Trump's election has receded into a distant rumble, pierced occasionally by further worrisome announcements by the president-elect that only underscore his total inadequacy for the job ahead, France has returned to its own problems − its primary elections. 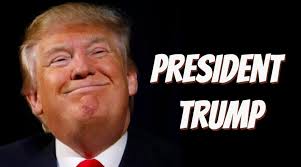 A Trump presidency could potentially have serious consequences for Europe and the Middle East, especially at a time of dangerous geopolitical tensions, so one immediate concern for French voters is how to avoid a similar disaster in France, where Marine le Pen of the extreme-right, islamophobic, anti-immigrant Front National party (and admirer of Trump and Putin) is a candidate for the presidency in 2017. If elected, she promises to leave the European Union (a Frexit, if you will), send back refugees, and close French borders. Nationalism and protectionism − just like Trump − would be her program.

The recent primaries of the French center and right parties in November have produced a surprise winner:  conservative François Fillon of the Les Républicains party, whose fellow-candidate Nicolas Sarkozy was eliminated in the first round. 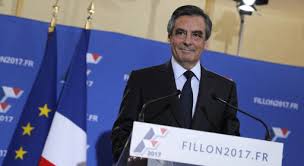 A very divided French left will hold its primaries in late January with a mixed bag of candidates. The surprise announcement of sitting president François Hollande that he will not seek a second term may have improved the chances of the splintered left but not enough to survive the first round. Fillon will therefore face Marine Le Pen in the second round of the presidential election in April 2017, and although it is not expected that Le Pen will win, that possibility cannot be excluded.  [There are some independent candidates as well, but a Fillon-Le Pen runoff is still the most likely outcome.]

Time, then, to wake up to a worst-case scenario of total chaos, keeping in mind that Brexit was not expected to pass but it did, and Trump was not expected to win but he did. Imagine also, if you can, a Europe that is increasingly leaning to the right (Norway, Denmark, Sweden, Britain, Germany, The Netherlands, Belgium, France, Hungary, and perhaps post-Renzi Italy), with "commander in chief" Trump and his ally Putin at the helm. Are you worried yet? I think we should be.

How did we get there?
In France, one contributing factor surely is the total crumbling of the left during the presidency of François Hollande who disappointed both the left and the right and compromised himself out of any significant reform, including the lowering of the unemployment level which he had staked his second term on. Among growing disagreement right from the start, eight ministers left his government (in protest or fired), a ninth was convicted of tax evasion, and a number of close advisers were dismissed as well. A certain amount of amateurism and incompetence accounted for a difficult start and precious time lost, but the greatest self-inflicted damage to any chance at re-election was probably caused by the recent publication of the book A President Should Not Say That..., written by two investigative journalists who over the past five years were granted numerous exclusive interviews with President Hollande. As authors Gérard Davet and Fabrice Lhomme of the respected daily Le Monde write in their introduction, Hollande welcomed these interviews, and with very few exceptions stuck to the agreed-upon weekly one-hour sessions throughout.

Cautious by nature, Hollande nevertheless seemed at ease with these journalists and surprised them by making a number of disparaging and damaging statements about certain persons and institutions. More than once he said: "A president should not say that..." (title of the book), knowing that these conversations were being recorded, but saying it nevertheless. About his first prime minister Jean-Marc Ayrault (So loyal he is inaudible); about the president of the Parliament Claude Bartolone (He is insignificant); about his young Minister of Education Najat Vallaud-Belkacem (She is no intellectual, but she is good at stonewalling); about the Judiciary (An institution of cowards); about the French national football team (A bunch of under-educated brats who have become overly-rich super-stars; football clubs should not only work on their muscles but on their brains as well); on immigration (We have too many immigrants that should not be here). He even mentioned four targeted assassinations by French secret services under the code name Homo, which some have called a breach of national security. Finally, the book reveals that Hollande, who is always seeking advice, does not listen to any.

Amid the brouhaha that followed the book's publication last month, Hollande's defense that his words were taken out of context (in a book of nearly 700 pages based on taped interviews?) did nothing to help his cause. Majority leader Claude Bartolone publicly broke with Hollande and refuses to speak to him; the two highest magistrates of the country accused the president of humiliating the judiciary and demanded a retraction (they did not get it); Manuel Valls and socialist party chairman Cambadelis distanced themselves from him, and even the foreign press weighed in, with expressions of incomprehension from German Handelsblatt and Spanish La Vanguardia. Translated by We, the People, as:  WTF ???????????????

Here is a devastating indictment of the man who wanted to be a "normal president" (as opposed to Nicolas Sarkozy's "bling-bling" presidency), who made a virtue of being simple but employed a personal barber at €10,000 euro per month, who craved secrecy yet managed to have his love life and messy breakup with mistress A splashed all across the media as a result of his poorly-disguised night-time scooter escapades to mistress B. And who ends his first term amid appeals from his own camp to please go away and let prime minister Valls try to save what he can of a totally disintegrated left before the January primaries. After an agonizingly long wait, Hollande finally threw in the towel on December 1st and immediately flew to Abu Dhabi to attend the opening of a branch of the Louvre museum - where, amid the gaudy glitter and the pride of Arab leaderdom, he could temporarily forget his own gilded Elysée bunker that had so effectively shielded him from reality these past years.

But let me not end on such a negative note and try to find a chuckle where I can, for instance in the fertile field of French-English confusion. It is an established fact that few French people (especially the well educated of a certain age) speak English. Or, at least, English that an English-speaker might understand. So it took me a while to figure out what a French friend was talking about as we were discussing the American elections. What sounded like "pawn sweet" remained a mystery to me until she referred to Facebook and the growing "pant suit" nation of Hillary Clinton fans. Naturally!
In France as elsewhere, most computer terms are English (except the word computer, ordinateur in French), but here they get conjugated to become:  drivé, switché, tweetez, likez, followez, etc.
Two bistros in Aix are selling Handburgers now, and one is offering Go Home Food.
And do you know what a female DJ (disc jockey) is in French? A DJette!
😂😂😂
I am going to have my chuckle at a local bar where the Happy Hour lasts five hours.  Cheers! 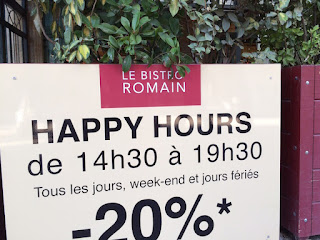 Posted by Anne-Marie Simons at 6:26 AM